Every so often I visit the U.S. Patent and Trademark Office looking for new trademarks submitted by game companies. I found something interesting last night. CCP has abandoned all four of the trademarks it owned for EVE: Legion. 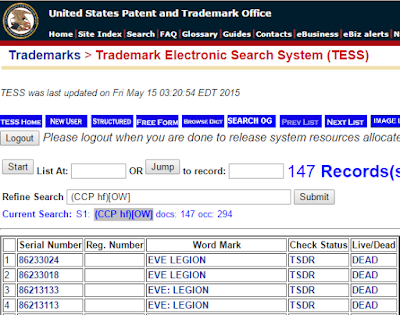 CCP abandoned all trademarks on 13 April. Not only do I no longer see any live trademarks filed with the U.S., containing the phrase "EVE Legion", but a search of the EU trademark databases also failed to find anything.

Perhaps I need to cast a broader net. I hear that Blizzard files is remote trademark offices to avoid instant attention to its future plans. But with CCP abandoning all of the trademarks filed in the U.S., I have to ask the obvious questions. Is Project Legion dead and has CCP given up on the idea of bringing a first person shooter to the PC?

EDIT: In response to the comments, I perhaps missed the most obvious question. Does CCP plan to port DUST 514 to the PC as DUST 514? If so, what a difference a year makes.

EDIT 2: Biomassed pointed out that the EVE Legion is still trademarked with the World Intellectual Property Organization until 11 March 2024. The trademark received protection within the European Community on 6 March 2015.
Posted by NoizyGamer at 8:02 AM