I realize this second installment of my series is a bit delayed. Why wait until October to write about the purchasing habits of the buyers of black market ISK in August? Two reasons. The first is that I don't want to give the ISK sellers up-to-date information on the market if they are not smart enough to do their own research. The second is thoroughness. After posting the initial post on buyer behavior in July, I discovered another 84 billion ISK in sales on Player Auctions. While the amount didn't change any of my observations, I didn't want to turn into the U.S. federal government that winds up giving 2-3 revisions to economic data. So I waited a couple of extra weeks to make sure I had all of the data. 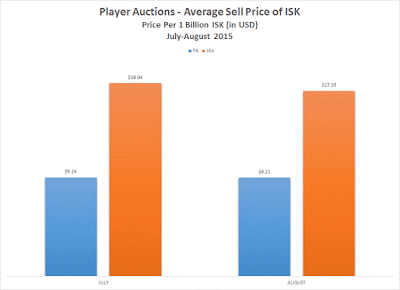 Glancing at the average price of 1 billion ISK sold on both PA and in The Forge, one might get the impression no major changes occurred. The price on the legitimate market in Jita fell 3.9% and the average price sold on Public Auctions dropped less than 1%. The volume of ISK sold on PA fell by 27.7%, from 1.831 trillion ISK down to 1.324 trillion ISK.  Belying the idea that the drop was due to seasonal variability, the amount of ISK purchased with game time in Jita rose 11.7%, from 65.6 trillion ISK to 73.3 trillion ISK. But the important observation is what happened to the black marketeers wallets. Sales dropped by over $4,700, or 30%.

The Player Auctions review system continued to give a high rate of feedback, giving reviews for the individual sales of 1.175 trillion of the 1.324 trillion ISK I tracked in sales in August. Based on the buyer reviews, here's the market share (with the actual names removed) for the sellers on PA. 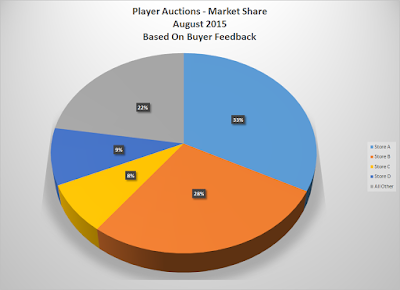 Store "A" sold the most for the second straight month. However, the seller lost market share as the price offered from from $8.50/billion ISK to $10/billion ISK over the course of the month. Still, over July and August, Store "A" sold over $8,000 USD over those two months.

Store "B" again was the second biggest seller, and gained market share based on a 20% increase in ISK sales. The seller sold almost $3,000 USD in ISK in August and over $5,500 over July and August.

Store "C" actually sold the fourth largest amount of ISK, but came in third in the amount of real world money in sales. However, ISK sales dropped by 58% as the seller refused to drop its ISK price. Oh, and the seller was very nervous during August, even though he shifted his focus over to selling virtual items like PLEX.

Store "D" is a mid-tier seller that had a good month. 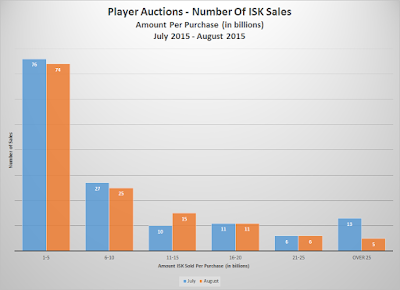 Looking at the size of individual purchases shows where the biggest drop-off of sales occurred. Basically, the whales stopped buying in August and the amounts showed the drop-off. 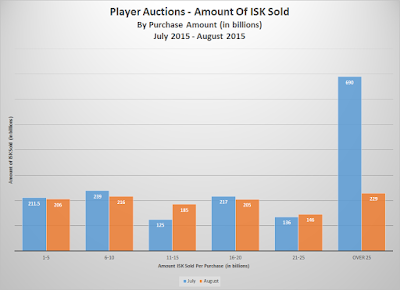 But while the whales drive big rises and drops in the amounts of virtual cash sold, I am looking at the small buyers who only buy 1 or 2 billion ISK at a time. I think if the buyers of smaller amounts decide to purchase their ISK using PLEX, then we will see a lessening acceptance of illicit RMT as less people participate in the black market. The percentage of those buying such a small amount only dropped from 30% in July down to 29.4% in August. 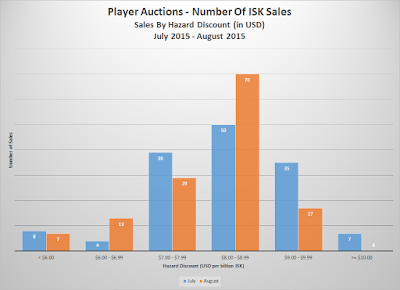 Perhaps the next graph is my favorite of the ones I created for this post. In March, the difference in cost between what buyers would accept from an illicit ISK seller and that obtained from buying PLEX and selling the game time on the in-game market was between $10-$12 USD. In August, that range ran between $7-10 USD. The 3.9% reduction in the effective real world price of a billion ISK in Jita resulted in the number of sales of ISK with a $9 or greater discount falling from 42 down to 17. As the price of PLEX continues to climb, the discount will grow smaller and smaller. 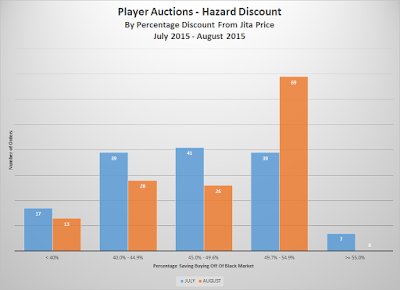 I'd like to conclude this post with an observation. I came up with a theory that the hazard discount would become approximately 50% of the converted USD price of a billion ISK sold in Jita. The median hazard discount in August was 49.7%. Don't take that as confirmation I was right, because I do not believe that one month's worth of data shows that. However, adjusting the 50.0%-54.9% band to 49.7%-54.9% did produce an interesting graph.

I want to reiterate on what I previously mentioned. All of the information included in this post was compiled 6-10 weeks ago. In EVE's black market, that is an eternity. But evaluating the state of CCP's War on Illicit RMT takes a little research into the sales of the black market, even though the data is scarce.

As a teaser, I have the preliminary set of numbers for September. I'll just say that September was an interesting month. But people will just have to wait a month until I write the next post.
Posted by NoizyGamer at 6:00 AM