So now the Imperium plans on acting like the Roman Empire of old and conduct punitive raids against the barbarians on its borders. At least, that's the feeling I got from listening to The Mittani's latest State of the Goonion address last night.

The goals, at a strategic level, are simple. Chase all potential threats out of Cloud Ring and then pursue them into low sec. Let's look at the situation in Cloud Ring as of 0600 on 20 November. 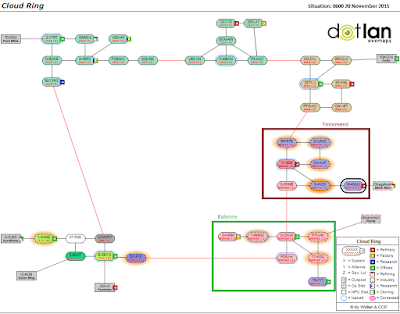 The main players in the region who will become embroiled in the conflict are:

I Whip My Slaves Back and Forth [J4LP] - A former member of the Imperium and still friendly to the coalition. The name of the 530 member alliance comes from its roots in the Amarr militia. J4LP currently controls the north and north-west of the region.

Space Monkey's Alliance [SMA] - The second largest alliance in the Imperium with 5456 members, SMA controls the Assilot constellation in the north-east portion of the region.

WAFFLES. [N0MAD] - The 235 member alliance is the feeder alliance for Pandemic Legion. The 7 systems and 2 stations WAFFLES. owns in Cloud Ring is the totality of its holdings in sovereign null sec.

Pandemic Horde [REKTD] - A new player alliance founded by Pandemic Legion. The 6 systems and 2 stations Pandemic Horde own in Cloud Ring is the totality of its holdings in sovereign null sec. With 2219 members, Pandemic Horde makes up for the lack of skills of its members with raw numbers.

Brave Collective [BRAVE] - At one time Brave Collective was famous as the largest new player organization in New Eden. But after its eviction from Catch and a change in leadership that kicked all of the inactive players, the alliance is down to 2 systems, 1 station, and 732 members.

In the south-west constellation of Yrton is a collection of small alliances undoubtedly hoping that the Imperium will ignore them.


In the constellation of Tinnimerci, Imperium forces were thwarted in their plans to immediately attack the system of W-4NUU as Pandemic Horde changed the vulnerability timer in the system to the Australian time zone. While probably only delaying the inevitable, the change does delay the Imperium unexpectedly. The Imperium did manage to reinforce the Territorial Claim Units (TCU) in 8R-RTB, Q-UA3C, and OU-X3P, as well as both the TCU and Infrastructure Hub (iHub) in 6-4V20. While TCUs are little more than flags to let others know who owns a system, an iHub allows an alliance to install upgrades that improve the value of a system. The system of W-4 contains a station as well as an iHub and TCU, making the system a very valuable prize as the Imperium begins its efforts to purge the region of any threats.

According to a post on Reddit, Pandemic Horde successfully evacuated all its assets from Cloud Ring, with the fleet that began the night in W-4 taking a wormhole route to Delve. But the post does not address what WAFFLES. plans to do. I also do not know what the Imperium intends for Brave's holdings in YI-8ZM. My guess, though, is that the Imperium will clear out both Balenne and Tinnimerci before diving into the low sec areas of Black Rise and Placid.

Oh, and one other note of interest, if true. Apparently one of Goonswarm's top fleet commanders, Vily, has quit the GSF and joined TEST Alliance Please Ignore.

The Mittani seems to have his heart set on wading into the Caldari-Gallente factional warfare war zone. He also appears to throw a significant portion of the Imperium's war chest into a low sec campaign. Perhaps he needs a war in order to keep the line grunts happy.

That's the update for now. Depending on how the fighting goes, I may try to keep up with short posts every day. The Mittani is promising his people a long hard fight, but I'm not really sure how long the average line member will keep derping around in low sec. Also, with that much of the Imperium's power deployed away from the homeland, will other groups start testing the home defense fleets? Something tells me that the renters in Pure Blind will start screaming for help within a month. But that's why we watch the fights and don't just determine the outcome in a blog post.
Posted by NoizyGamer at 6:00 AM