Today is day 2 of the Imperium's war to crush out the existential threat represented by Pandemic Horde, WAFFLES., and a whole host of other smaller alliances. I'm looking at the balance of forces and then remember The Mittani's history as a third party broker for titan sales. 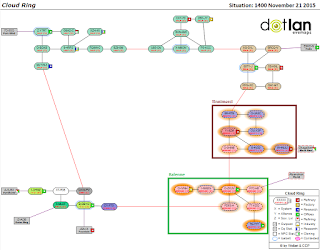 Anyway, as of 1400 today, all sovereignty structures owned by Pandemic Horde, WAFFLES., and Brave Collective in Cloud Ring are in reinforcement. That means that once the reinforcement period is over, the Imperium can commence its attack to destroy them in the case of Territorial Control Units and Infrastructure Hubs, or force the stations into Freeport mode. Stations first go through a period in which they are open to everyone before an alliance can capture the station. The Freeport mode is an indicator that perhaps defending players should get their assets out of the station.

The fight over the systems is not very fierce. Brave has offered opposition in the form of Cormorant fleets in their station system of YI-8ZM as well as the Pandemic Horde controlled system of 6-4V20.

Pandemic Horde apparently is not allowing the Imperium to distract it from conducting offensive operations in Querious. In the system of A2-V27, owned by The Methodical Alliance [TMA], kill reports indicate a large amount of Pandemic Horde activity. While the Gallente Outpost in the system is still firmly in TMA control, both the TCU and iHub were placed into the reinforced state. The iHub will come out of reinforcement at 20:38 today, while the TCU comes out at 21:10.

One last thought. I thought Pandemic Horde was fighting SMA, not TMA. D'oh!
Posted by NoizyGamer at 9:59 AM