The Kickstarter War: The End Of Phase One?

Usually when a writer ends a title of an article or post with a question, the author usually has an answer in mind. But I honestly don't know if the Imperium has accomplished all of its phase one goals in The Kickstarter War. The situation in Querious, caused by the displacement of Pandemic Horde from Cloud Ring, has stabilized, with Pandemic Horde entrenched in A2-V27 and now fighting over the neighboring system of T8H-66 with The Methodical Alliance. TMA also appears to have DARKNESS. enchroaching on its western borders, but that is a conflict outside the scope of this series. 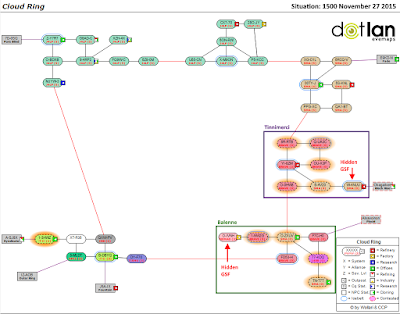 In Cloud Ring, I don't know the status of Brave Collective's relationship with the Imperium. A sovereignty fight is apparently going on, with both sides reinforcing each other's structures. One interesting observation is that except for the first day of the conflict, the Imperium has left the Brave capital system of YI-8ZM alone. In return, Brave has not attempted to interfere with Goonswarm Federation's [CONDI] ownership of the outposts in W-4NUU and O-IVNH. At this point, I don't know who reinforced the SpaceMonkey's Alliance outpost in O-ZXUV. The fifth outpost in the war zone, in TN-T7T, is currently in freeport status.

The review of station ownership brings up a second interesting point. The GSF owns two stations but is allowing others to plant Territorial Claim Units in those systems. In the case of W-4NUU, that seemed like a division of effort between allies. The Goons would take the station while SMA would clean up Pandemic Horde's other sovereignty structures. But O-IVNH left me scratching my head. Why leave a WAFFLES. [NOMAD] TCU up in the system? I thought the whole purpose of phase one was to erase Pandemic Horde. and WAFFLES. from the region.

So what is the thinking of the Imperium leadership? The obvious answer is that The Mittani and the Imperium leadership team want to make SMA look a little more capable than they really are. Perhaps we will find out more tomorrow when The Mittani goes on the air with The Meta Show on the TMC Twitch channel. What is disclosed on that show tomorrow will determine how I cover this conflict in the future.
Posted by NoizyGamer at 9:59 AM