I begin to wonder if war weariness has struck the Imperium already. Or perhaps boredom. On Sunday Imperium forces decided to travel to the Geminate region to battle NCdot. A quick look at the map of New Eden may explain my statement. 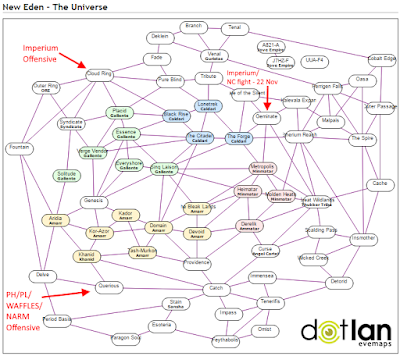 Geminate is 4 regions away from Cloud Ring, the Imperium's main theatre of operations. But even if the Imperium line grunts continue to chase after squirrels, victory in Cloud Ring seems almost certain. Let's look at the happenings from yesterday and the early morning hours of today. 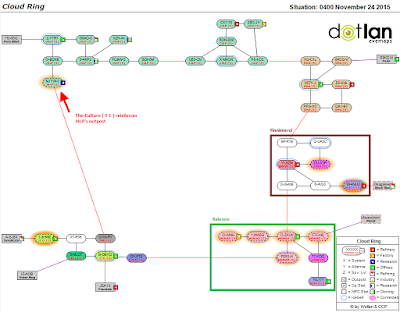 In Cloud Ring, the Imperium is coming closer to purging the constellation of Tinnimerci of all Pandemic Horde and WAFFLES. forces. WAFFLES. lost sovereignty over the system of O-0HW8 while in W-4NUU, Imperium forces reinforced Pandemic Horde's Territorial Claim Unit and placed the station into Freeport mode. Brave Collective, on the other hand, has no sovereignty structures reinforced as of 0400 this morning. The question now is whether the Imperium will allow Brave to keep the system. Since the system apparently is Brave's capital system, the Imperium may want to bypass the system.

One interesting tidbit is that The-Culture [-T C-] appears to have reinforced the I Whip My Slaves Back and Forth [J4LP] station in MJYW-3. Since the existential threat of the Pandemic Horde, Northern Army, and friends torwards not only the Imperium but J4LP was one of the casus belli listed in The Mittani's State of the Goonion on 19 November, I wonder if the Imperium will extend its actions toward purging The-Culture from the region as well.

In Balenne, the Imperium managed to place the WAFFLES. controlled stations in O-IVNH and O-ZXUV into freeport mode. The WAFFLES. TCUs in 1-NW2G, FD53-H, and F7C-H0 are also reinforced and vulnerable for destruction today. Interestingly enough, the pressure was eased on Pandemic Horde's sovereignty structures in TN-T7T and none are in a reinforced state. 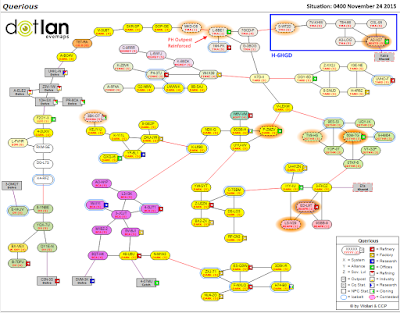 The fighting in the north of Querious is particularly interesting. Pandemic Horde and friends, knowing about the upcoming Imperium punitive raid in Cloud Ring, moved to the space of The Methodical Alliance to take up residence. PH somehow managed to aquire possession of the Gallente outpost in the otherwise TMA-owned system of L-6BE1. Whether they can keep the station is another story, as the station is reinforced and fighting can commence a few hours after this post is published.

The fighting in the north-eastern constellation of H-6HGD, while perhaps not involving large numbers of ships, appears more interesting than that going on in Cloud Ring. Pandemic Horde and friends are attempting to destroy the TMA Infrastructure Hubs in the constellation. Yesterday, TMA saved their iHub in A3-LOG but lost the one in T8H-66. The iHub in 0-WT2D was put into reinforced mode yesterday and will become vulnerable to attack on Wednesday at 23:48 EVE time.

The entryway into low sec, A2-V27, continues to see action, although should enjoy a period of calm today. In action yesterday, Pandemic Horde and friends managed to put the system's outpost into Freeport mode, but also saw its own TCU and iHub reinforced by TMA and their friends. Those timers all allow for fighting on Wednesday.

The Methodical Alliance may have picked up two allies. Pilots for both DARKNESS. [DARK.] and Short Bus Syndicate [TARD] are listed on kill reports fighting the PH coalition in H-6HGD. DARK. is a 2280 member alliance led by Sort Dragon, who has an interesting resume. He led the Honey Badger Coalition before the Fountain War which is the subject of the book a Kickstarter effort is trying to fund for best-selling author Jeff Edwards to write. Also, in the battle of B-R5RB, the ability of his Titan to tank the incoming fire of the PL/N3 forces was the turning point in that battle, as the CFC/RUS fleet managed to destroy 5 PL/N3 titans during that time. I am under the impression that Pandemic Legion does not like Sort Dragon. possibly due to his behavior at Fanfest in 2013.

As we go into day 5 of the war, we can see how the conflict has spread. The Imperium pushed into Cloud Ring, causing Pandemic Horde to seek a new home in Querious. The conflict could erupt from the northern section of Querious as Pandemic Legion once again faces the prospect (perhaps eagerly) of locking horns with Sort Dragon and DARKNESS.. At the same time, war could come to the Yrton constellation of Cloud Ring as The-Culture pokes at Imperium ally J4LP.

I honestly don't see the war continuing over a month, but I don't live in null sec so the possibility exists I'm completely wrong. But the war is interesting enough I actually abandoned my recent pattern of only posting three days a week. Hopefully people will enjoy reading about a small conflict in EVE.