Today the first major defection from The Imperium occurred as Circle-of-Two reset all of the members of the coalition. From the announcement on Reddit:

"For years now we (CO2) have been loyal towards the CFC (Imperium). We, as an alliance, have for a large part never been seen as a full member by GSF. As a result we've never been treated nor represented as such. The basis of the coalition -it being a meritocracy -became an affront over time.

"In the same timespan the list of grievances grew. I will not go into detail as the people involved know full well whom and what I'm talking about. They can mostly be summed up as GSF taking care of their interests and at the same time blatantly disregarding the coalition policies they claim to uphold.

"Exactly 5 months ago Sion threatened to expel Circle-Of-Two from the coalition. In very clear terms we were ordered to fall in line or suffer the consequences. We choose the latter and informed our members that expulsion was imminent from that point on.

"We continued to do what good allies are supposed to do; help where assistance was needed. At the same time we did what we think an alliance should do; take care of our members, try to grow and better ourselves.

"We had, separate from Goons, made plans to defend Tribute and Vale together with The Bastion and Get Off My Lawn. All it took was a candlelit dinner with Mittens for The Bastion and Lawn to completely abandon Vale and leave CO2 alone to defend Tribute. The whole time other Imperium alliances were called to Saranen, while we were not even informed of such movements or how they would relate in regards to the defense of Tribute.

"Over the past few months it has become increasingly clear that we have served (only) as a meatshield. Circle-Of-Two is NOT a meatshield. We will not stand as the wall that defends Deklein from the angry hordes for the benefit of Goons. We will no longer subject our pilots to the indecency of watching their hard work burn while Goons sit in their ivory tower. We will no longer stand as an unequal partner in The Imperium. For the good of our members we will be separating ourselves from The Imperium with a full and complete reset of all Imperium member alliances as of 2016.03.29 at 00:01 EVE Time.

Both TMC and EveNews24 covered the news. The EN24 piece was just a copy of official statements. The TMC piece, as befitting a news site that publicly announced a pro-Imperium bias, also attacked the actions of Circle-Of-Two. I'll let readers click on the links and make their own judgments. 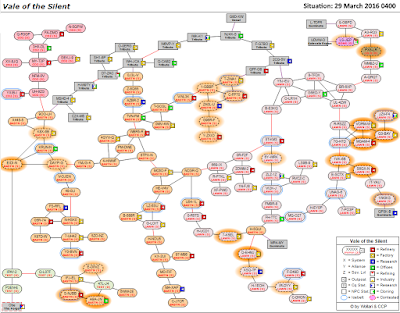 A quick look at the map of Vale of the Silent might suggest why CO2 leadership was a bit upset with the developing situation. In The Mittani's announcement on Saturday, he addressed the futures of both The Bastion and Get Off My Lawn. But he did not address the status of the third sov holding alliance in the region, Circle-Of-Two. Another point I wonder about is the ability of the main Imperium force stationed in the Lonetrek system of Saranen to come to the aid of forces in Tribute. Did CO2's leadership have a legitimate worry that the rest of the coalition planned to allow CO2 to fight alone? I honestly cannot answer the question. 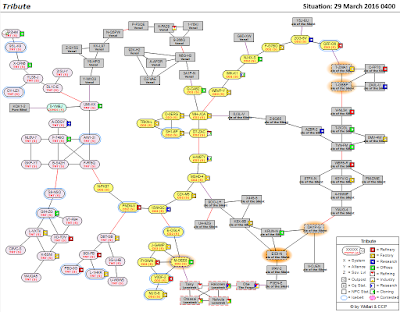 Now the Imperium is in a bit of a jam. Yesterday, it effectively lost half of Tribute. If CO2 actively cooperates with the anti-Imperium forces, a lot of the grind that The Mittani is counting on to deter the loose-knit coalition against him gets a lot shorter.

I should add that the defection of CO2 is not the only major problem facing the Imperium. However, that story will have to wait until another day.
Posted by NoizyGamer at 6:00 AM