A Blueprint And Fixing Standings

I was a bad blogger this weekend. Instead of writing a super-duper cool post, I spent the weekend playing EVE. So with the mining update going live tomorrow, I have an update on my quest for the great white battleship. 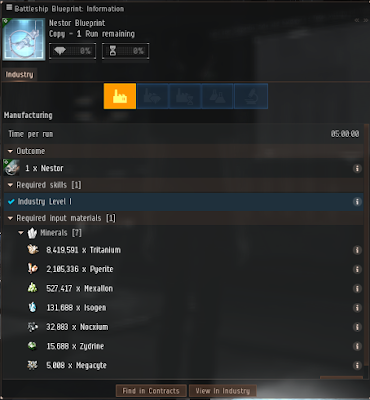 On Saturday, I met my 600,000 Sisters of EVE loyalty point goal and spent the 150 million ISK to get a Nestor blueprint copy. Now, all I have to do is acquire the minerals to build the damn thing.

All right, if I don't already have all the minerals sitting in my hanger already, I'm only a little bit short on tritanium. But using minerals I've already mined breaks the rules I set up on my little quest to build a Nestor. Just as I didn't use any of the 348,000 loyalty points I had already acquired to buy the BPC, I plan on mining all of the ore starting either tonight or after the patch goes live on Tuesday.

The major casualty of the grind was Rosewalker's standings with the Amarr. I forgot to record his starting standings, but by the end, his unmodified standings stood at -9.03. Diplomacy improved the total up to -5.22, but that still put him on the Amarr Navy's shoot-on-sight list.

On Sunday, Rosewalker took a Prowler to Oremmulf and started running missions for three level 1 distribution agents for Imperial Armaments. I thought distribution missions were the fastest way to improve Rosewalker's Amarr standings. He needed to run storyline missions in order to improve his faction standings. The only problem was that the game only gives out a storyline mission for every 16 regular level 1 mission run with a faction. Worse, I had to decline any storyline mission involving shooting Minmatar faction ships, as I did not want to drop my Minmatar standings any more than necessary.

One disconcerting fact I encountered is that level 1 distribution agents do not always hand out distribution missions. They even hand out mining missions. I discovered that a Procurer, even one flown with Rosewalker's sub-par skills, made extremely short work of those. For the level 1 combat missions, I pulled out an old sniper fit for a Breacher. A 54 km range with tech 2 light missile launchers made short work of the NPCs.

I'm beginning to wonder if mining missions would work better, assuming the grinding pilot can fly a Procurer decently. If none of the missions requires more than 2000 m3 of ore mined, that's less than one Strip Miner I cycle. The missions could take even less time to run once Procurer hulls receive two turrets on Tuesday. I may need to conduct an experiment to find out.

I wound up running three of the four storyline missions I triggered because one was a combat mission. The two courier missions granted me a 0.09 point gain in my unmodified standings and the Materials for War mining mission gave me a 0.14 point gain. The 0.32 gain translated to a 0.25 modified standings gain, raising my standings from -5.22 to -4.97. The Amarr Navy will grumble as I traverse their space, but I made my standings goal.

As I mentioned before, the next step is to acquire the minerals needed to build the Nestor. While the bulk of the mining will occur in high sec, I still need to travel to my mining caches in low sec to get some of the rarer ore. I may even take a trip to null sec to get the needed megacyte, as mining in null is safer than mining in ore sites in low sec. But for now, I am right on schedule to build the great white battleship.