The Declining Value Of A Subscription

Just a quick post about subscriptions in MMORPGs. As players, we trained the game companies well. Back at the beginning of the century, the monthly subscription became standardized at $14.95 per month. Some games charge less, but I am unaware of any game that charges more. Eventually, the game companies need more money to keep up with inflation. 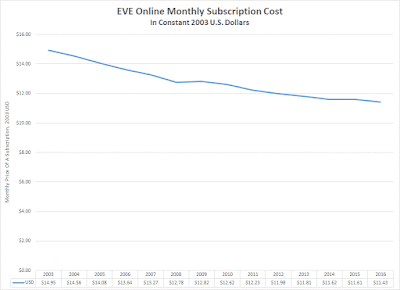 The above graph shows the amount that players pay for a monthly subscription in EVE Online. Over the course of the past 13 years, the value of the monthly subscription CCP collects has fallen 23.5% in constant 2003 U.S. dollars. While the subscriptions rose, CCP could shrug off the decline. But despite an amazing 10-year run of rising subscription numbers, the inevitable happened and the numbers started to drop in 2014.

A lot of people say that EVE is dying and a move to any type of free-to-play or freemium option is proof. The answer is simpler. The value of the subscription falls every year and CCP is looking to replace the lost revenue. The amount of the subscription is capped. The prices for virtual items, on the other hand, are not. Guess which direction CCP is moving. I don't think the answer should surprise anyone.
Posted by NoizyGamer at 6:00 AM