On Tuesday, CCP Peligro hit social media and tweeted about the latest bot bans. The unusual part? The naming and shaming of alliances. Greater Western Co-Prosperity Sphere is the rental alliance for Goonswarm Federation and Fraternity. Treasury I believe is the rental alliance of Fraternity.. With a combined membership of 2024 as of 9 May, CCP Peligro banned approximately 30% of both organizations. A pretty big hit.

Elo Knight, the well-known mercenary fleet commander who moved his corporation into Fraternity., asked CCP Peligro to extend the naming and shaming. The reply probably surprised everyone.


Team Security has pointed out for years that rental alliances are home to large amounts of botters. At Fanfest 2015, the security team pointed out the fact, but didn't name and shame.

At the time, the big 4 rental alliances were Shadow of xXDEATHxx, Northern Associates., Brothers of Tangra, and Greater Western Co-Prosperity Sphere. I don't have any inside knowledge about the chart (because I didn't ask), but I've always believed the three alliances who were home to 63% off all banned accounts during that 10 month period were Shadow of xXDEATHxx, Northern Associates., and Brothers of Tangra.

Disclaimer: not posting absolute values, and the percentages are in the context of a SELECT TOP 25 clause.
This is the same historical data we've shown at fanfest but without the names removed. #tweetfleet #eveonline
Year To Date data will be shared later; same names different% pic.twitter.com/bYpX180BTU
— CCP Peligro (@CCP_Peligro) May 9, 2019

While I want to wait for the 2019 list to come out, the all-time list provided by CCP Peligro produced two names of interest because the alliances are so new. The first, Fraternity. Treasury, is listed as having 5% of the bans of the top 25 alliances home to the worst offenders in EVE history. [COINS] only sprung into existence on 11 November 2017. The second, Pan-Intergalatic Business Community, was formed a little over a year ago on 16 April 2018. The currently 6450 member alliance came in tied for 11th place with 3%.

I think we are witnessing a resurgence of aggressiveness from CCP in regards to anti-bot and anti-RMT operations. From 2010 to 2015, CCP always gave a security presentation. That was reduced to a roundtable in 2016 and nothing since. In addition to the increased number of security dev blogs this year, CCP Peligro is a bit more active on social media as well. 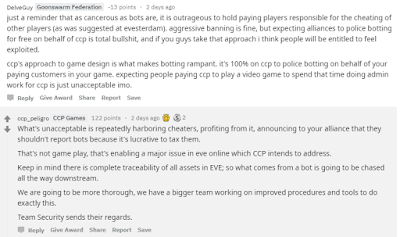 I would be remiss if I didn't add in a bit more analysis. CCP Peligro becoming more vocal comes at an interesting time. I am currently working on a story about CCP's "Top-down, bottom-up" approach to the War on Illicit RMT.


The top-down pressure of the price of PLEX is definitely impacting the price of black market ISK. From July 2015 to April 2019, the average USD price of 1 billion ISK sold has dropped 51%. During the same period of time, the price sold on the multi-game gold selling site Player Auctions has dropped 50.5%. Just from market pressure alone, profits for ISK sellers are probably down 50%.

But with decreased prices, the professional ISK sellers become more sensitive to the bottom-up pressure of bans. Bans usually result not only in reduced supply, but lost assets as well. With the hazard discount current at the $4/billion mark, ISK sellers really don't have that much room to increase prices to try to make up for losses incurred from bans. The fact that CCP is making noise about ramping up the pressure on botters could lead to some interesting developments on the black market.
Posted by NoizyGamer at 12:00 PM