One of the more amusing subjects that emerged from the recent CSM election was the question of pay-to-win mechanics. Is EVE Online pay-to-win already? Some of the arguments had me cracking up. I was reading one of the channels on the Talking in Stations and someone asserted that no one purchases titans with real life money.

In a world where people spend tens of thousands of dollars on ships for a game still in alpha, people won't spend hundreds of dollars on titans in EVE? Right. I don't have figures on players who do so using the CCP-approved process, but I have a little insight on the black market. 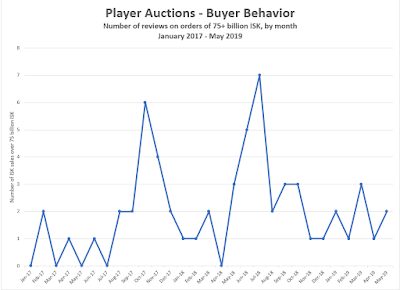 I don't try to keep track of titans purchased directly for cash. But the RMT website Player Auctions provides customer satisfaction reviews which I track. Not all transactions have reviews, so the numbers in the chart above are low. But from the beginning of 2017 to the end of May 2019, I recorded 58 transactions of 75 billion ISK or more. I've always figured titans cost at least 75 billion ISK, so I've used that as the standard for probably titan sales. By that standard, 58 of the sales were probably related to purchasing a titan.

People informed me that titans don't cost 75 billion ISK. Outside Delve, the going rate is 65 billion ISK, with costs within the Imperium down to 45 billion ISK. The below graph is the result of the change in assumptions. The number of titan-scaled transactions jumped from 58 to 201. 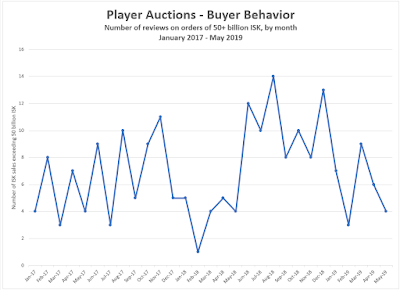 One of the peculiarities of the second graph is the decline in the middle of the time period, running from December 2017 to May 2018.  During that time, CCP went a lot overboard on sales to attract a buyer. Even whales need a big enough hazard discount to make buying off the black market an attractive proposition.

Over the years I've gathered a lot of data on real money trading in EVE Online, both the type sanctioned by CCP and found on shady third-party sites. I might have to create more short posts like this instead of writing 10-page essays. I hear EVE players like graphs and charts.
Posted by NoizyGamer at 10:42 AM