Back in September I took a look at the Minmatar Republic's low security space.  While most may view that space as an arena of combat between capsuleers, I looked at the geography(1) of the region looking for non-military sources of wealth.  But with CONCORD openly siding with the Amarr by opening new stargates designed to make Metropolis harder to defend, some pilots may prefer more peaceful areas of operation.  Since CONCORD clearly favors the Amarr Empire(2), I now turn to Amarr low security space.  Crumbling empires often provide wealth and opportunity for those bold enough to seize them and the Amarr Empire certainly falls in this category.


How big is Amarr low sec?  Before looking at Amarr's low security holdings one has to realize the sheer size of the Amarr Empire.  The Empire spans 8 regions, 101 constellations and 700 systems.  Combined with the Nefantar puppet regime the Amarr installed in Derelik the Amarr appear at first glance an unstoppable giant. 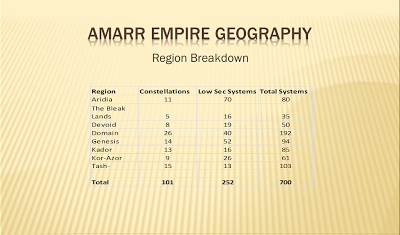 But looks are deceiving.  Of the 700 systems claimed by the Amarr Empire, 36% of the systems have a security status of .4 or below.  The 252 low security systems represents an area 90% the size of the struggling Minmatar Republic.  While the Amarr, with 36% of its systems inhospitable to the Empire's golden fleets, holds firmer control over its territory than their former slaves, that is faint praise.  The Amarr Empire is still suffering from a slide begun by its loss to the Jove at The Battle of Vak'Atioth 134 years ago.

Planets - Capsuleers often look to exploit the planet-bound as relatively passive sources of income.  While those in low security systems are not as placid as their high sec counterparts, the benefit of planets in low security space is their higher output of planetary interaction products.  Those corporations strong enough can also run their own orbiting custom offices, with the taxes going into the hands of capsuleers instead of the transportation giant InterBus. 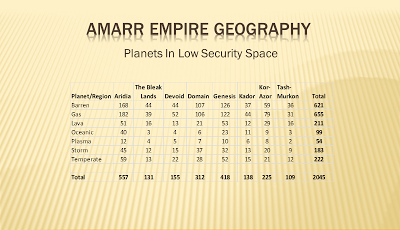 One thing that struck me was the large number of planets in low security systems in Domain.  Domain is home to the Amarr system and the Amarrian Empress.  While having very productive low sec planets 5-6 jumps away from New Eden's second largest trade hub is a boon to the enterprising industrialist the situation does not say much for Amarr's internal security situation.

Moons - Planets are not the only celestial bodies of interest to New Eden's empyreans.  Long before the Planetary Development Treaty of YC112 opened up planetary interaction capsuleers constructed starbases (a.k.a POS) around moons.  Unlike planetary interaction, successful operation of a POS requires a strong military presence.  But starbases do expand the economic capabilities of a system as the faction governments are slow to build and improve upon the infrastructure in a system.  In addition to researching and manufacturing activities, POS built in systems with a security status of .3 and below can support moon mining, another source of passive income for corporations and alliances. 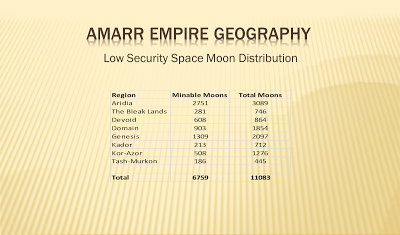 Looking at the moons and moon mining helps tell the story of the security situation in a region.  For example, while the Amarr have allowed a surprising number of systems in Domain to drop to under .5 in security status, over 50% of the moons in Domain low sec are in .4 security systems.  In comparison, in Aridia 89% of the moons are exploitable.

Aridia also stands out in another respect.  Its 2751 moons available for moon mining is 200 moons less than exist in all of Minmatar low sec.  In the Minmatar Republic only Molden Heath, another region that hosts no faction warfare, comes close to this percentage. 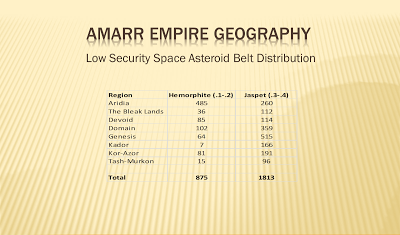 First, Amarr miners receive a much better selection of ore to mine in .3 and .4 security systems.  The most "valuable" ore for Minmatar miners is kernite, an ore found in high security systems held by the Empire.  Instead, .3 and .4 security systems are locations in which miners first find jaspet, which in addition to producing good amounts of mexallon and nocxium when refined also contain trace amounts of zydrine.  The most valuable ore found outside of gravimetric sites in Amarr space is hemorphite.  While hemorphite contains a lot less isogen than the hedbergite found in Minmatar .1 and .2 security systems, hemorphite does contain 20% more nocxium and more different types of minerals.

Non-capsuleer Stations - I mentioned before that capsuleers have resorted to building their own POS due to the lack infrastructure built by the four factions in Empire space.  But what infrastructure currently exists in Amarr low sec to support the exploitation of natural resources by capsuleers? 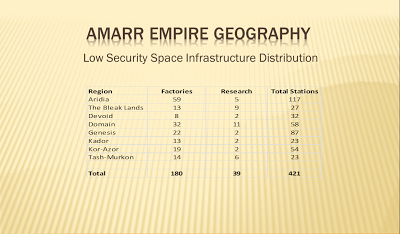 The fact that stuck out is that low security areas in the Minmatar Republic are a lot more developed than those in the Amarr Empire.  In Minmatar low sec each system contains an average of 3 stations and 1.2 factories.  The Amarr systems only average 1.7 stations and .7 factories.  Of course, the sheer size of the Amarr Empire results in the Empire having 37% more stations and 49% more factories in their low security systems than the Republic.  But the lower density of stations and their associated services means that a capsuleer may experience more success finding a backwater system or constellation in Amarr low sec than in Minmatar-claimed space.


This high level look at the low security space of the Amarr Empire just scratched the surface of the analysis in which one can engage by looking at geographic information.  I plan on writing at least one more geography related post based on some of the data I uncovered while researching this piece.  Sometimes stories emerge from the strangest places.

Disclaimer:  All data was obtained from Dotlan: Eve Maps.  Any data errors are a result of sloppy data entry on my part and not due to that worthy site.

1 - I have referred to this subject as "geography" instead of "astrogeography" as GalNet refers to astrogeography as a subject bordering on the occult.