I have to admit something.  I'm not good at mining in Eve Online.  Sure I have all the skills but mining involves more than just making a training plan and sneaking up on a vicious asteroid.  A player needs practice and quite frankly I hate mining in high sec.  A player needs to have good standings in trade hubs to sell products and I really don't like the idea of going back to high sec to run missions for the Brutor Tribe.  I don't know how to properly fit my ships since my Procurer doesn't have a Mining Laser Upgrade II (even though I can use one) but is fitted with a point. 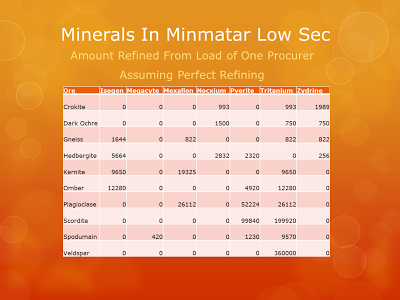 But perhaps my greatest weakness is not knowing which rocks to shoot.  I'm always told to mine the asteroids that produce the most money.  But that isn't intuitive as to which ones are the most valuable.  When CCP created ores they made them so that the rarest (and presumably most valuable) ores had names at the beginning of the alphabet and the most common at the end.  Hey, that's how FCs call targets, right?

But that is not the way New Eden works and mining gneiss like I did Wednesday is bad.  Bad because I had a lot of choices that were a lot better from an economical point of view.  After doing a little research to make the table above I realized, "mining gneiss is kind of dumb."  Well, from a conservative, industrialist point of view.  But I tend to think outside the box.  Or, as others might put it, I'm a bit crazy.

So what led me to make the sub-optimal choice of gneiss instead of a more profitable ore?  I was caught up in the situation.  Here were the conditions in space at the time:
The hardcore miner might look at my reasons and label them as rather silly.  Then again I think a lot of hardcore miners look at mining in low sec as a pretty silly thing to do anyway.  Heck, I think most people think mining in low sec is pretty silly.  But really I only do it because I'm too lazy to fly out to Hek to get more ammunition, although with the recent changes to the Probe I may wind up making a couple copies of the Minmatar exploration frigate for my personal use.  I actually have researched copied of all the tech 1 Minmatar frigates and cruisers so if I really wanted to I could build ships in low sec.  But I probably won't because I'm not very good at mining.

Posted by NoizyGamer at 8:48 AM