Has a year really gone by since the end of Fanfest 2012?  The year may seem extended because Fanfest was pushed back to April this year to take advantage of warmer weather but I was returning back to work one year ago today after attending the party at the top of the world.  Looking back I thought I'd point out a few things I found interesting.

First, The Nosy Gamer became a lot more popular.  Going into Fanfest the blog averaged around 100 visitors a day according to Site Meter.  Now?  400. 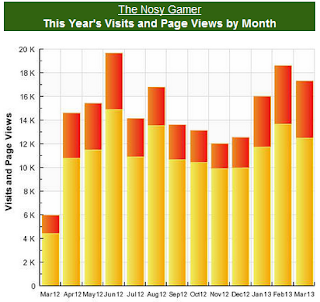 The blog got a huge boost in popularity with CCP Sreegs pointing out the blog in first his Security presentation and then in a Eve Online forum thread as a source of botting tears.  The tears have dried up with Team Security's successes but somehow I've managed to keep an audience.

The next thing is the status of two people I saw on the Golden Circle tour last year: Raivi and Michael BoltonIII.  Back then they were highly visible players due to their roles as Alliance Tournament commentators.  Now they are known as CCP Fozzie and CCP Dolan.  CCP Fozzie has left his claw marks on Eve in his efforts in re-balancing New Eden's ships.  He's not the only one working on the project, and the project had already begun when he was hired, but with his arrival the effort really moved into high gear.  Add in his openness in engaging with the players and accepting feedback and he's turned into one of the game's most popular devs.  Some might label 2012 the invasion of the commentators as Verone (CCP Falcon) and Kil2 (CCP Rise)1 also left the commentary booth to work in Reykjavik.

Finally comes a non-CCP moment.  Right before Fanfest last year the lovely and talented Emily "Domino" Taylor left her position as Associate Producer of EverQuest 2 to take another position in the gaming industry.  I hoped that some smart Icelandic gaming guru had swept her away from the clutches of SOE's John Smedley and I'd see her make her appearance at Fanfest.  Instead, I noticed the absence of Nathan Richardsson (aka CCP Oveur).  Judging by his tweets he took his beer ship and flew off to San Diego where the pair went to work for Trion on Defiance, an MMOFPS that launches on Tuesday.  Looking back it's probably a good thing that Domino stayed in Southern California as she doesn't like rotten shark.

With that look back I can now look ahead to Fanfest 2013.  Hopefully CCP didn't nerf the volcano too much.  Maybe I should take my work laptop with me just in case.