Yesterday Eve Online witnessed an event players had not experienced in two years.  That's right, Eve saw the peak current users (PCU)1 for the day exceed 60,000 for the first time since the launch of the Incarna expansion.  Sunday's total of 60,476 is the fifth day in Eve's history that the PCU exceeded 60,000.  I contacted Chribba, the owner of Eve Offline, and he was kind enough to send me the times it has happened in the past.
For a bit of comparison of how big 60,476 people is, I looked at the size of the cities in Iceland.  A big deal was made a few years back when the number of subscriptions exceeded the population of Iceland, so I wondered how the active population compares to Iceland's cities. 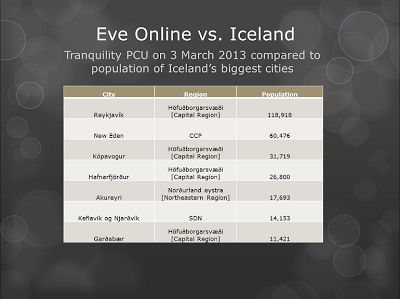 If New Eden were a real place its population would make it the second largest city in Iceland.  Does anyone want to wager that CCP's marketing materials might include such a comparison once DUST comes fully online?

I also wonder how long the doom and gloom crowd will take to announce how horrible a development this is.  How Eve doesn't have enough space and resources to support so many players.  Why, we'll have to add space to high-sec or all the carebears will quit because they will not have enough asteroids to mine!  If CCP doesn't submit to their wishes they will quit, and because each carebear has 2.5 accounts that will lead to a failcascade that will cause CCP to shut down Eve and go bankrupt!  That's right, we'll never get to see vampires emerge from the World of Darkness.  Oh noes!

Okay, that last was written with tongue planted firmly in cheek but some forum troll will use those arguments.  Personally, seeing Eve's numbers recovering to the point I thought I'd see two years ago is enough to give me a warm feeling.

1 - Peak concurrent users is the highest number of players logged onto Tranquility at one time during a day.  The New Eden day follows the in-game day.
Posted by NoizyGamer at 7:00 AM