Oftentimes covering Eve Online's botting scene is boring and filled with inaction.  But sometimes things get crazy.  Some of you who have followed my coverage of CCP's War on Bots will find this tweet from CCP Sreegs amusing.


Red guard is now behind a pay wall. If you buy it we will ban you. The pattern is try to get money before you vanish. Typical and pitiful.
— Sean Conover (@seanconover) March 10, 2013


That's right, Red Guard is no longer freeware.  Cost to purchase: $25.  And here's where I started laughing.  "The charge is $25 per update. 'Update' means CCP action (deliberate or not) that forces me to go back and recode parts of RG. It DOES NOT mean a bugfix release or snoopcode change."

Of course, that doesn't happen a lot.  Besides what happened last Tuesday, the last time the developer had to update code was way back on 19 February.  That's 3 weeks ago for those reading in the future.  So for those who wish to continue to use Red Guard, be aware that not only can the prices get fairly expensive but when the application does need to be updated, whoever is using it at the time will most likely receive a permanent ban.


"Well, you want input. IMO you sound funny. You sound quite paranoid about CCP detection methods, hint there are three - sending bad exceptions, tripping sanity filters (actions per second, hours played etc.), and getting reported by a player."

I like this quote so much I actually took a screenshot to record it just in case civan tries to send it down the memory hole. 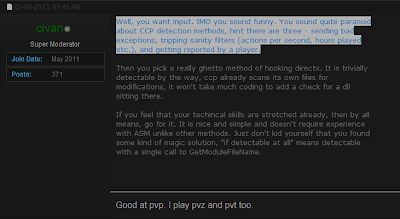 Looks like he was wrong, wasn't he?
Posted by NoizyGamer at 7:00 AM