Yesterday CCP announced that Eve Online had surpassed the 500,000 subscription mark.  Not bad for a company whose first game was the board game Hættuspil ("Danger Game").

In a press release CCP credits the popularity of the Retribution expansion as well as the relaunch of Eve in China for reaching the milestone.  Looking at information about the Tranquility shard information available at Eve Offline, we can see that the average number of concurrent users jumped with the launch of the expansion on 4 December and has increased by over 10% since.  The current average number of accounts online now rivals the period just before CCP Sreegs launched what I now call the War on Bots in March 2011. 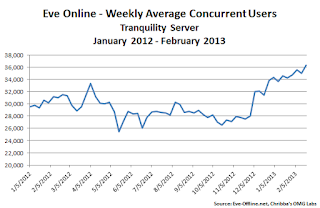 What CCP has accomplished is amazing and CCP's CEO Hilmar Veigar Pétursson is probably still grinning from ear-to-ear today.  When Eve Online launched in May 2003, the king of the MMORPG world was EverQuest with between 450,000 - 500,000 subscribers.  That a small 21-person indie developer in 2003 was able to surpass that number, even if the effort took 10 years, is one of the great Cinderella stories in gaming.  While others will mock the accomplishment, comparing Eve to the popularity of World of Warcraft, I'd counter by asking how many other game companies besides Blizzard have more success with using the subscription model today.  The answer is none.

Of course, CCP can't rest on its laurels.  While my searches were unsuccessful, I remember that at the time Eve's subscription numbers exceeded the population of Iceland a video was published with Hilmar stating that the next goal was to reach 600,000 subscribers.  So put away the cake and party favors CCP, because you still have work to do.
Posted by NoizyGamer at 8:50 AM