I've watched the outrage among the Eve Online player base about botting in New Eden.  I haven't done much.  While others rage at CCP to take action and others organize suicide gank squads, I've just reported on the events.  Really, I'm the kind of guy who always flies unarmed ships through low-sec.  I'm not going to gank anyone, right?

Well, not intentionally.  I haven't touched a hair (or a pod) of any botter in-game.  Outside the game?  I didn't mean it, honest!  It just happened.  I didn't notice anything unusual until I started looking at the search terms that people used to find the blog.  Apparently people are coming to The Nosy Gamer looking for information on Eve bots.  Let me give you a few examples.

The first concerns the late, unlamented RoidRipper, the first victim of CCP's War on Bots™.  Please take note who shows up #1. 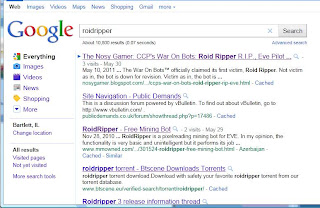 That's right, me.  I didn't mean to hover over RoidRipper's corpse; it just happened.  That same post also gets me near or at the top of searches involving Eve Pilot as well.  I like the results of this search best. 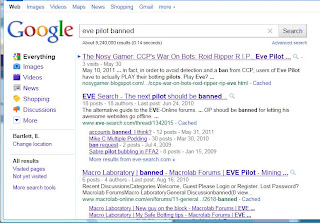 I love the text Google chose to display: "In fact, in order to avoid detection and a ban from CCP, users of Eve Pilot have to actually PLAY their botting pilots."  If someone is looking for a bot, that is the last thing the potential botter wants to read.

But I have other posts that are also at or near the top of the Google searches.  I'm pretty sure that the proprietor of Ghost Suite isn't too happy with this result. 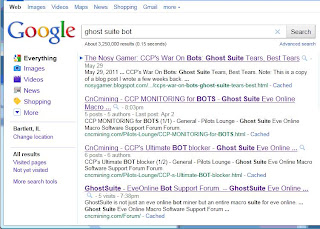 Sure, the description isn't too bad.  But those were some really good tears in that post.  I'm pretty sure after reading that post that any potential botter will think three times before using Ghost Suite.

But I've saved the best search, "tinyminer banned",  for last.  Not because I am at the top of the search, because I'm not.  I just love the juxtaposition. 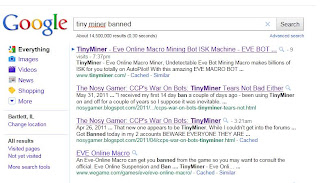 The TinyMiner text claims that the bot is undetectable.  Then immediately following are two posts of mine with examples of users of TinyMiner who CCP banned.  Priceless!

Now, rankings come and go so these probably will look different tomorrow.  That's why I posted the screenshots.  I never thought this would happen.  I didn't plan it.  But I think it is funny.
Posted by NoizyGamer at 6:00 AM