Today the Imperium announced they are abandoning Vale of the Silent.


Both The Bastion and Get Off My Lawn will retire their main fighting force to the Imperium staging system of Saranen, a low sec station in Lonetrek one jump out of Pure Blind.

The main purpose of the post is to post two maps of Vale of the Silent for my own records. 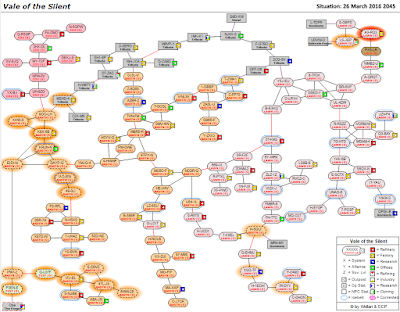 The first map shows the sovereignty situation approximately 15 minutes after The Mittani announced the withdrawal on The Meta Show. Test Alliance Please Ignore attacked The Bastion from the south-west corner of the map while Pandemic Legion advanced against LAWN in the north-east corner of the region. 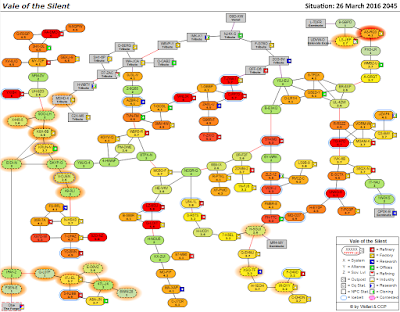 The second map contains the activity defense modifiers (ADM) for each station. The reason for saving the maps is I wonder how the situation will shake out. How long will evidence of The Imperium's presence remain? After TEST captures the space it desires, will The Money Badgers open up the rest of Vale to small alliances and turn the region into a big thunderdome similar to Cloud Ring? The future of null sec is uncertain at this point. One thing I do know is that we will still have our eyes fixed on the north of New Eden when Fanfest and the Citadel release come around in April.

Posted by NoizyGamer at 8:31 PM