The Casino War: Setting Up The Weekend's Battles

Ten days ago I first took an interest in The Casino War as the AFK forces of Pandemic Horde began to stream into Fade. My first map looked like this: 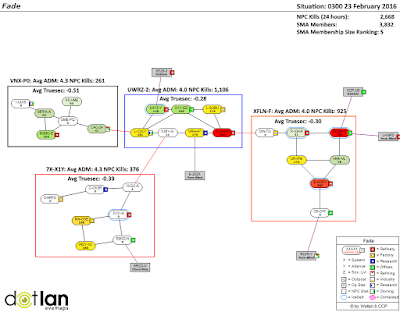 The situation today is a bit different as SMA is grinding in an effort to maintain their active defense multipliers in order to help stave off another weekend assault on "Fortress Fade." 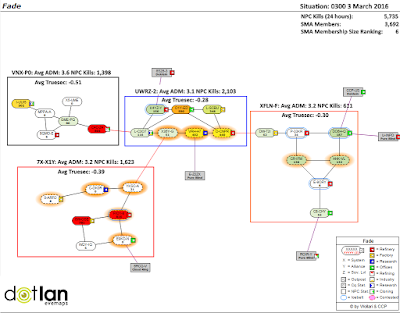 Last weekend, SMA, along with fellow Imperium alliances Goonswarm Federation and Tactical Narcotics Team, were a perfect 10 for 10 in defending sovereignty structures. But over the last ten days, the anti-Imperium forces whittled away at SMA's defences, lowering the average activity defence modifiers in all four constellations:


Switching over to the ADM map we can the modifiers for the defenders and which systems host reinforced sov structures. I have added the timers to the map. 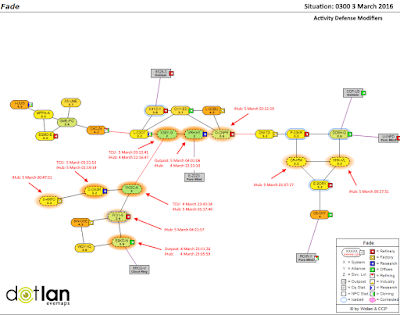 Late Friday night and early Saturday morning, SMA and friends will defend 15 sovereignty structures, including 10 infrastructure hubs, over a 6 hour period. The iHubs are key, as destroying the iHubs will decrease the ADM by 1 in a system. A decrease of one means that an attacker reduces the amount of time needed to entosis a node by 10 minutes. I expect the Imperium to attempt to slam the door on any attack this weekend.

I should add that during last weekend's efforts, the combat in the region basically shut down the PvE needed to maintain the activity defense modifiers. But SMA seems intent on defending their home in Fade. I expect the Imerium to hold the line one more time this weekend. But can SMA's leadership keep their members motivated long enough for Pandemic Horde to get bored with buzzing around Fade and leave for more interesting content? Get out the popcorn because New Eden is about to find out.
Posted by NoizyGamer at 6:00 AM