I know I'm weeks behind the news, but in the security dev blog published on 24 February, CCP announced the "ISK Buyer Amnesty Initiative":

Effective immediately, we are also offering amnesty for ISK buyers who come clean by emailing security@ccpgames.com with actionable evidence of people selling ISK. Such information should include:

For your honesty and cooperation, which is sincerely appreciated, you will not be banned. Other actions will be determined on a case by case basis.

We want to point out that this is not intended to encourage anyone to go and buy ISK – if you have already then you can come forward with actionable information and receive amnesty as described above. Repeat offenders who have previously utilized the amnesty program will of course not be viewed in such a positive light.


I admit I am not a big fan of the idea of an amnesty as described in the dev blog. Before stating my reasons, I should first post my thoughts on why CCP may think an amnesty is a good idea.

First, I suspect that Team Security has either amassed a list of hundreds, if not thousands of people who recently purchased ISK from shady sources, or believes it can quickly generate such a list. Why do I believe so poorly of my fellow players? I noted a few weeks ago how PLEX sales skyrocketed with the introduction of skill point trading on 9 February. A lot of players decided to visit shady buyers as well. 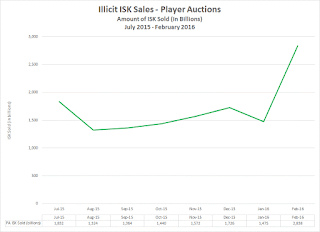 As shown in the graph above, the amount of ISK I tracked sold on the virtual currency site Player Auctions almost doubled from January to February. I feel pretty safe in concluding the increase occurred due to players wanting to purchase skill points with real money, but not wanting to pay full price.

How does the introduction of skill point trading give Team Security the ability to find hundreds, if not thousands, of people who purchased ISK from shady sellers? The simplest way is to look at the financial transactions of those who purchased skill injectors. If a player purchases 10 skill injectors and the money came from a character that was biomassed shortly after the transaction, then the possibility exists that the ISK used was dirty. CCP has a lot of big data techniques they can use to find suspicious behavior contained within the logs. Contrary to the longstanding joke, the logs show a lot. Getting players who purchased ISK to turn in their suppliers would aid in refining the search algorithms.

Now, CCP may believe that nothing fundamentally changed in relation to the percentage of players who see the black market as a valid place to purchase ISK. At a quick glace, the amount of ISK traded for game time in The Forge far exceeds that sold by Player Auctions. 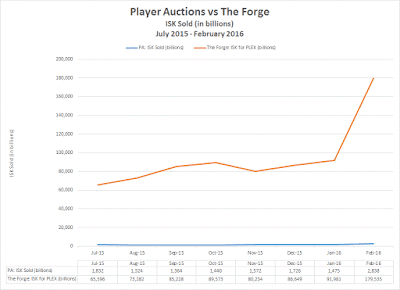 I don't have great tools for measuring player adoption of PLEX. One that I use is the ratio of ISK sold on Player Auctions versus that used in The Forge to purchase game time. 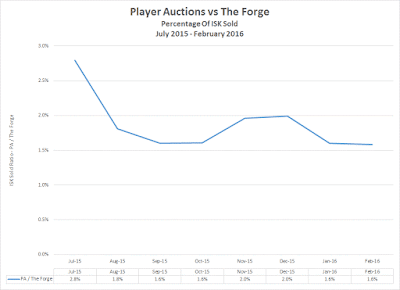 According to my measure, the amount spent on ISK on Player Auctions has fallen between 1.6% and 2% since August. For example, although the amount of ISK purchased doubled in February as compared to the month before, the percentage remained constant at 1.6%. If CCP has similar measures, then Team Security is probably searching for a way to increase the aversion to purchasing illicit ISK. A good way might involve turning every buyer of illicit ISK into a potential informer.

I understand the desire to do more to discourage the illicit RMT trade. I just question whether a permanent offer of ISK amnesty is the way to do so. I fear that the real effect will lead people to believe they can just keep buying dirty ISK until caught. I know the language suggests that violators must come forward before getting caught, but I'm afraid that part will become garbled in translation.

In case someone from CCP reads this post, I have three suggestions for the ISK amnesty. The first is to make the amnesty a limited time offer. People tend to react to deadlines. I would give ISK buyers until the end of March to turn themselves in or risk having all the punishments take effect. The second is to spell out consequences concerning skill training for those caught purchasing ISK. For example, ISK buyers should forfeit the ability to use both skill injectors and skill extractors on all accounts. Finally, if someone is caught purchasing dirty ISK to purchase skill injectors, that instead of removing ISK from the player's wallet, to remove the skill points from the player's character instead.

Perhaps I am too hardcore about punishments. But I think CCP may get a better response if they tell players that they could save the skill points in their heads if they turned in the person or company they purchased their ISK from if they act by the end of March.