If folks try the mining event this week, we'd appreciate your feedback on the sites! It's been a while since a lot of eyes have been on this content, so there should be lots we can improve. We hope to bring these mining events back again regularly in the future. #tweetfleet

I originally planned to write my final thoughts on the Stargate Trailblazers event today. CCP extended the event two days, until downtime tomorrow, so I still might run a few more sites just to get up to 500 points. I don't think running three more Standard sites solo will really alter my thoughts on the event, so let's begin. My perspective is as a pilot who only mined and did not shoot the NPCs.
The content is designed for groups. I don't think I can stress this enough. I was able to run the Minor and Standard sites solo in an Endurance. I also completed a Minor site solo in a sig/speed tanking Prospect. I should add that the character I used has trained all relevant skills to fly expedition frigates up to level 5 plus uses an Inherent Implants 'Highwall' Mining MX-1005, which gives an additional 5% to mining yield. Even with all those advantages, I needed to use the mining yield boosters obtained from the event to comfortably complete sites.
The character cap. Each site has a character cap for good reasons. For example, when doing a site in low sec or null, players could just warp in some alts to make the site invulnerable to attack. But the caps can also cause problems for pre-made groups. My last fleet ended when the other pilot I was flying with activated the acceleration gate. He went in and I remained behind. He wound up joining the fleet in the site and I said goodbye.
I wonder if CCP could make the payout dependent on the number of pilots in the site. Too many and the payout gets really low. Then again, I do like that the payout is the same for everyone in the site. I'm not sure I'd want the devs to change that.
The content is very clicky and repetitive. I am one of those players who uses the mouse instead of keybinds for most actions. Due to the small size of most of the asteroids, I was clicking off the mining module after about 10-12 seconds flying the Endurance and a little longer when flying the Prospect, due to using 2 Miner IIs. I know watching the leaderboard that people can dual-box the content, but I didn't even try.
The rewards are not compelling. The Stargate Trailblazers event gave out four types of rewards. The first were boosters. Except for a couple of randomized boosters in Agency Support Drop containers, all the boosters were limited time mining boosts. I like the idea of using event rewards to make participating further in the event easier. However, the bind on redeem aspect reduces the value.
The next two types of rewards are gained from the loyalty store. Completing the sites grants players loyalty points for the local faction's corporate store. The first of the LP store item categories was Super Kerr-Induced Nanocoatings (SKINs). The SKINs are limited to tech 1 ships. The SKINs, at least for Republic Fleet Ordinance, look okay. The SKINs were not appealing due to the fact I don't really fly tech 1 ships anymore, combined with SKINs not exciting me in the first place.
The other type of loyalty point store item is clothing. Unless Walking in Stations returns to EVE in the future, clothing only really matters when creating a portrait for use in chat channels. While I went ahead and purchased the Republic Stargate Crew Top, Republic Stargate Crew Pants, and Republic Stargate Crew Shoes, only the top will be seen by other players. In a future event, I might try to obtain the Ordinance Jacket for 50,000 LP, but I really don't like the Officer Jacket, especially for 70,000 LP.
I have to say, the new portrait I took after purchasing the gear helped make running the event worthwhile. I think the color combination along with the background looks good.
The last type of reward was ISK. According to my wallet, I completed 39 sites for a total of 166 million ISK. That total would have been higher if I completed more sites with other players. As far as I could tell, running a site solo guarantees the minimum reward. I did receive bonus amounts when fleeted with others because we could complete the sites so much faster. Figuring in the 25 million ISK I spent in the loyalty point store and approximately 5 million ISK I spent on fitting out my Endurance, and I came out with 135 million ISK more than I started with.
Where do you turn in loyalty points? I pointed out last week that The Agency is growing on me. But given some of the complaints I saw, I think some people don't know some of the finer points of the UI. The big question was, "Where do I turn in my loyalty points?" I can see how that could be a problem. 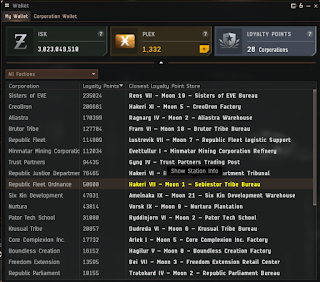 If players know the name of the NPC corporation (like Republic Fleet Ordinance), all they have to do is go to the Loyalty Points tab in the wallet and find the corp. A nice feature CCP added when the devs did the wallet revamp is the UI shows the nearest station with a loyalty point store. Even nicer is the ability to right-click on the station and set auto-pilot to show the route.
Now, I probably was fortunate in my choice of gate area. I picked Minmatar stations to operate from, so the loyalty point tab showed my the name of the NPC corporation I was working for. I didn't see the name anywhere else. A slight problem that hopefully CCP will highlight in the future.
The length of the event. I realize the Stargate Trailblazers was in many ways a live test. Still, the initial event length was much too short. I would hazard to guess that many people were turned off at the brief time and decided not to bother. CCP wound up extending the length of the event by 48 hours.
Final conclusion. I wouldn't call my experience over the last few days engaging with the Stargate Trailblazers event fun. Satisfying is probably a better term. I managed to get all of the rewards, both from the event timeline and well as the LP store, that I wanted. Well, the ones I felt were obtainable during the event.
Who is the content really for? I'd say people who are into cosmetic items (clothing and SKINs) as well as people who wanted to try to get their names on an in-game item (the gates). In other words, completionists. All others probably should stay away.
Perhaps the bigger question is, would I take part in a future event based on the old Resource Wars sites. I would at least take part in one more. As CCP Fozzie tweeted out last Tuesday, CCP plans on basing more events on the content. The gameplay in Stargate Trailblazers was interesting enough for me to look at what the developers come up with in the future.
Posted by NoizyGamer at 2:43 PM