A few weeks ago I pointed out how user counts began to decline in EVE Online at the time the pre-patch for The Burning Crusade hit the WoW Classic servers. At the time, I wasn't expecting as much of a dip as we've seen over the past month. While the number displayed on EVE-Offline.com is not precise, the average concurrent user count has dropped 3000 to 4000 accounts over the past month.

Yesterday, Ripard Teg posted a new set of concurrency graphs to his archive site that displays the drop in starker terms. Also, according to Ripard's graph, the decline is closer to 5000 accounts logged in at once.

The last time EVE players witnessed a drop like the one occurring now happened in the three weeks after the launch of the World of Warcraft Classic servers in August 2019. The widespread disgruntlement with Blackout greased the skids for many players to wind up in Azeroth. Combine the migration with the traditional summer slump and EVE witnessed a decline of over 20% of players logged in at any one time.

Are we witnessing something similar in 2021? I think so. History never repeats itself exactly, but I believe four factors will result in a continuing decline over the summer.

A post-lockdown summer. I think everyone expects a lot less video game playing over the next few months as local and national lockdown measures designed to combat the COVID pandemic are gradually lifted. Choosing to stay indoors and play games is one thing. Not having a choice in the matter? People will go out just to go out.
The question for EVE is, was the beginning of the traditional summer slump moved up from mid-July to mid-May? If not and we still have a big summer slump ahead of us, the servers are going to feel mighty empty.
Lack of a big content update. EVE Online is not the only game experiencing a drop in players right now. The game called Retail WoW is also experiencing another migration from Azeroth to Final Fantasy XIV. While I don't play WoW, I can say from personal experience that the login queue has gotten longer in recent weeks. Bad for logging in, but good for dungeon queues.
The long content drought, now over 7 months, is about to end. Blizzard will launch Patch 9.1 next week. I expect players will flock back to WoW in order to experience the new content, although the new raid won't launch until 6 July.
Unlike Blizzard, CCP releases patches and new or revised content on a monthly basis. In the past, players would receive expansions in May or June. Those expansions, if they didn't increase activity over their lifetimes, at least held off the inevitable summer slump for a month or two. But beginning in the summer of 2014, CCP switched to a Software as a Service model that pumped out updates every month instead of twice a year. While good for justifying players' subscriptions, the monthly updates don't have the pull of the old expansions.
Competition. If players are unsatisfied with a game, they'll vote with their wallets and find another game. The 2019 migration from EVE to WoW Classic during the Blackout period wasn't a unique experience. On the backend of the Summer of Rage, Tranquility witnessed a drop of 2000 average concurrent players upon the release of Skyrim in November 2011.
Is EVE Online facing competition? I decided to look at the black market. The gold/plat/gil sellers will flock to the games with the most action. According to the virtual game currency site Player Auctions, the top 5 most popular games today are:
I think we can ignore Old School Runescape and LoL for this analysis. Those games are always at or near the top of the list. Final Fantasy XIV is hot now due to the WoW migration but won't see a major content drop until Endwalker launches in November. Still, for bored players, FFXIV is a valid option.
But the games currently on the move are The Burning Crusade Classic and Elder Scrolls Online. I don't believe the decline in EVE beginning on the same day the pre-patch for TBC Classic dropped on the WoW Classic servers is a coincidence. On 1 June, both TBC Classic and Elder Scroll Online's Blackwood expansion went live. And with WoW's Patch 9.1 launching next week, the decline will probably continue.
War. Many EVE players may find the final factor surprising, but major null sec wars have a tendency to decrease the number of players logged in at the conclusion of the conflicts. For the first example, we travel back to 2011. The massive drop in ACU the year is known for did not begin with the Summer of Rage. The drop began with the destruction of the old Northern Coalition at the hands of the Drone Region Forces (aka Drone Russian Forces) in March. By the time the Incarna expansion launched at the end of June, the ACU had declined by 5000 accounts. 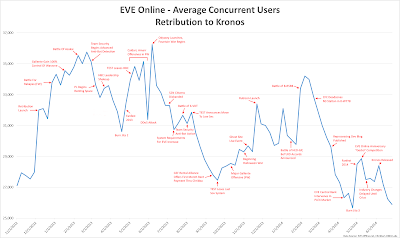 The next example comes from The Fountain War. While the war is best known for The Battle of 6VDT-H, we should not forget the aftermath. In the approximately 6 weeks following Test Alliance Please Ignore's announcement of its withdrawal to low sec, the average number of accounts logged into EVE fell by 4000. Fortunately, the Rubicon expansion was two months away to help draw people back into the game.
The final example comes from The Halloween War of 2013-2014. I think most people will find the aftermath of The Halloween War surprising. The war is best known for The Battle of B-R5RB, the most destructive clash of titans until The Battle of M2-XFE on 30 December 2020. So many current players credit the battle for drawing them into EVE. But the end of The Halloween War saw the typical drop in players logged into the game. Nine weeks after The Battle of B-R5RB. the ACU had dropped by 7000 accounts. Unlike after The Fountain War, CCP had no big expansion to draw people back to the game, as Kronos was the first of the small monthly patches.
What does that history mean for today? Currently most of the large null sec powers are engaged in a war that has dragged on for nearly a year. Unless PAPI comes up with a masterstroke of war, or The Imperium commits a blunder for the ages, the stalemate around the O-EIMK constellation in Delve will continue for months. How long until the current war is declared over? And once over, how many of the participants will leave for fresher gameplay?
The TL,DR. I've compiled a lot of information, but what does it mean? Why is the Tranquility server cluster suffering such a drop in activity?
Simply put, the content CCP delivers each month is not compelling enough to combat the natural seasonal pull away from EVE. The massive summer expansions that used to keep players at their keyboards a few weeks longer don't exist anymore. And the competition is not just limited to the weather. What do players find more compelling? Changes to gameplay found in The Great Escape and Enter the Portal? Or the thought of logging into the latest journey to World of Warcraft's past, The Burning Crusade Classic? What is more enticing, going out and doing something government lockdowns have prevented for the last 18 months, or beating your head once again into the opposition in southwestern Delve? If the war is stalemated or over, why stick around instead of going out to a favorite spot in the real world?
I think the answers are fairly obvious. Unfortunately I don't see the trend ending anytime soon. Historic trends should see activity increasing again in late September or early October. I really hope the numbers don't decrease too much more.
Posted by NoizyGamer at 6:00 AM