Yesterday I posted about how the lack of major content drops are helping to fuel the current drop in players logged onto Tranquility. About 30 minutes later, CCP Paradox posted about the next patch's content, "Hunter's Boon", on the official forums.

Today you will begin seeing changes from our next update “Hunter’s Boon” appear on Singularity, and further changes and updates will roll out daily for the next two weeks.

This update is focused on following up on several of our recent updates with adjustments based largely on your feedback. This update is still in development so expect regular changes over the coming weeks. Here are some of the larger components we plan to include:

Again more details will emerge over the next weeks, so please keep checking on Singularity and providing feedback on them. We appreciate all your help in tuning the last several patches and look forward to your input on the above changes!
Fly safe!

I don't know enough about covert ship operations to know how useful a covert cyno beacon deployable might prove. The booster to extend the stabilized period after cloaking I think might come in handy during long battles for bomber wings and streamers of fights. Removing the skill point loss will, if it doesn't encourage me to buy a T3C, takes away an excuse for not injecting skill points immediately. And the final two items I don't have an opinion about yet.
CCP also made a change on the Singularity test shard to visuals.

On 23 June, the Singularity test server will play host to a significant new visual update, including:
These changes are part of an ongoing commitment to improving the foundation of EVE, and setting the game up for a thriving third decade. By deleting the gray coloring, these upgrades will bring New Eden to life like never before.
The team is currently in the process of adjusting and fine tuning, and that’s where you come in. So please go ahead and hop onto Singularity at some point after 23 June, have a look around, and submit your feedback. With your help, let's keep EVE at the vanguard of graphical excellence!
More on all of this later - but for now, please log in and share your discovery with us, by taking screenshots, comparing the visuals, and so forth!

Honestly, if I didn't know changes were made, I wouldn't have noticed them. But I took screenshots and I can see them quite clearly. The only difference in the graphics settings is I have anti-aliasing turned on on Tranquility and off on Singularity. Here is a comparison from inside a Caldari station. 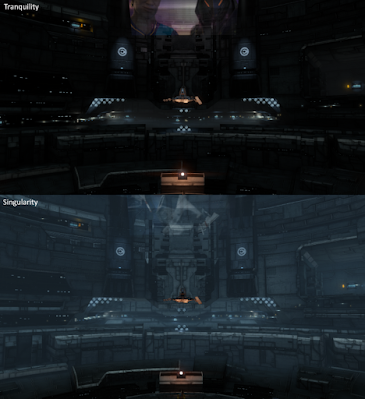 I like the darker tones inside the station we currently have. The new graphics in the station look a little washed out to me. I also undocked for some screen shots. I made a comparison of the view as I left the station. 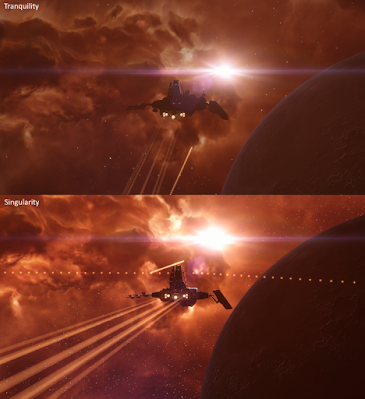 Since I was sightseeing, I travelled to the local storm planet. I think the storms that pop up are great. 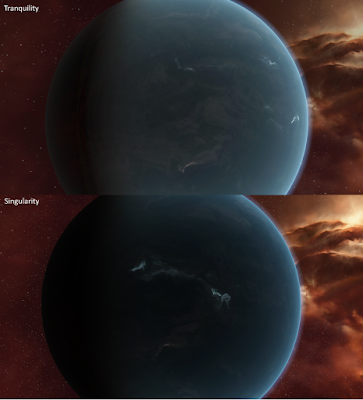 Of course, I had to grab screenshots of the sun. 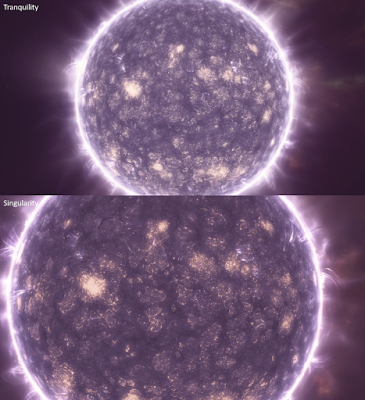 For some reason I couldn't get duplicate screenshots of the celestial objects. I think I've provided enough examples for people to get the idea of how the graphics will change in the upcoming Hunter's Boon patch coming to Tranquility in July.
CCP is definitely sticking with their SaaS model with EVE Online development. They really don't have a choice. I also think they are implementing the model well. A lot of players may not like the content provided, but CCP is delivering on a monthly basis. I just don't see anything spectacular that would bring players back into the game right now.
Posted by NoizyGamer at 11:29 AM