The election for EVE Online's 16th Council of Stellar Management began today and runs though downtime (1100 UTC) on 15 June. Over the past 2 years I've stepped away from covering the CSM, but I thought I'd give some thoughts in a post in case anyone cares.

My list of candidates. If anyone wants advice on who to vote for, I'd list these three candidates, who are all current members of the CSM:

Mike Azariah is the only high-sec based player with a chance to win a seat on CSM. He runs a service, which he calls The Magic School Bus, that gives out ships to new players in rookie systems. The Magic School Bus is not an election gimmick, as he began running around high sec distributing ships after his first run on the CSM. Besides that, he's just a good guy in real life. I've voted for him every year he's been on the ballot.

Brisc Rubal is the titan-owning line member with serious interpersonal skills. A Washington lobbyist and politician in real life, Brisc knows how to work with CCP. While third on the official Imperium ballot, in his two previous CSM wins, Brisc hasn't needed the official ballot support. If for no other reason, a vote for Brisc keeps my ballots counting toward the quota.

Ballots? Players can vote more than once? Yes. Players can cast a vote for each Omega account they own. However, the account must be active for at least 60 days before voting. When voting on multiple accounts, your selections are saved from the first account that votes, saving a player time.

How does the voting system work? It's ... complicated. I wrote a post back in 2018 explaining the system.

You only listed 3 candidates. Can't you vote for 10? Players can vote for up to 10 candidates. But who has time to research 47 candidates to pick 10? Also, why vote for someone just to fill up the number of slots?

Aren't you wasting your vote if you don't vote for 10 candidates? The wasted vote claim is my pet peeve about the single transferrable vote system used in CSM elections. A strain of thought exists that maintains that if someone votes for a losing candidate, that is a wasted vote.

For those still concerned about wasted votes. In the age of the 10 member CSM, the official Imperium ballot trickle has never positively impacted below the 6th candidate on the ballot. I think that is a pretty fair standard to set for yourself to avoid feeling guilty. Some people have other theories, like first vote for all the wormhole candidates, and then all the low sec, small gang candidates. In those cases, voting for more than 6 makes sense. But the important thing is, don't feel pressured to vote for all 10 slots if you don't want to. It's okay not to.

The origin of "the wasted vote". In 2012 and 2013, "wasted votes" was a meme following the "Wizard Hat" incident at Fanfest 2012 at the Alliance panel involving The Mittani. Without going into the details, the deal worked out between CCP and The Mittani involved the top Goon not serving on CSM 7. The big problem was, The Mittani received over 10,000 votes, or over 20% of the votes cast. As EVE players tend to do, the fact was thrown in everyone's face whenever the CSM was brought up for the next year.

Perhaps coincidentally, in 2013 CSM elections switched from first-past-the-post to using a modified version of the Wright single transferrable vote method. Theoretically, with the STV method, over 90% of participating players should vote for a winning candidate.

Has a candidate ever withdrawn or been removed after voting begins? Yes. In the CSM 11 election, Apothne had to withdraw due to a serious health condition after voting finished but before CCP announced the results. The election algorithm was rerun without Apothne, with Kyle Aparthos and Nashh Kadavr winning seats and Erika Mizune losing instead of winning. And in the CSM 13 election, Creecher Virpio was removed during the voting period due to chat logs with objectionable language surfacing.

Why vote? Goons are just going to win all the seats anyway. The Imperium is good, but they are not that good. If the turnout this year is similar to last year's, The Imperium will wind up with three winning candidates: Merkelchen, Innominate, and Brisc Rubal. And the only reason for The Imperium winning three seats is Brisc Rubal's personal popularity. The vote trickle mechanic Brisc received last year from the official Imperium ballot was 94 votes in round 29. Brisc began receiving enough votes to win in round 24. In a twist of fate, Brisc reached the vote quota to win due to trickle down votes from Mike Azariah in round 30.

The Imperium, and its predecessor the CFC, used to inflate their effectiveness by putting candidates that were going to win anyway on their official ballot. For the CSM 16 election, the powers-that-be decided to abandon that strategy. I think some people might receive a rude awakening.

Finally, voting from within the client, kind of!  Excuse the graphics spam, but I'm a little excited about the way CCP is publicizing the election within the client. First, at the login screen players are greeted with a 7-day election event that gives out 5 days of rewards. 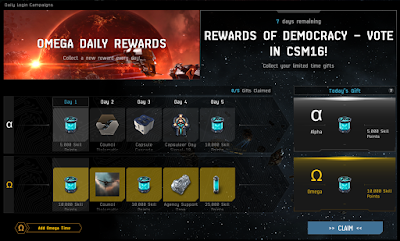 Once inside the game, a splash screen appears publicizing the election.

Clicking on the splash screen directs the player to the voting page. You may have to log into the page (I voted before logging into EVE), but voting is pretty easy this year. 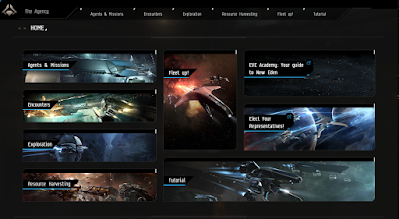 The nice part is, if players don't click on the splash screen to vote, they can do so by clicking on the pane on The Agency.

Pearl Abyss will be watching. One final observation to finish the post. Pearl Abyss will be watching. If the turnout is high, expect them to tout the turnout not only on the next earnings call, but in their monthly investors newsletter as well. In a time of declining activity, both the normal summer seasonal slump as well as the launch of The Burning Crusade Classic, a high turnout could convince Pearl Abyss it doesn't need to stick their fingers into EVE any more than they are now.

Posted by NoizyGamer at 1:15 PM