The Star Citizen money machine keeps marching on. The latest event was Invictus Launch Week 2951 which ran from 20 May to 1 June. The annual event allows players to try out ships they don't own as well as purchase new ships. As of the time I pushed the publish button, the Star Citizen funding page reads over $371 million.

I wondered how financially successful the event turned out for Cloud Imperium Games, but didn't have the historical information to figure out the answer. Thankfully a Star Citizen streamer, BoredGamer, put out a video on the subject.

Compared to last year, Fleet Week brought in $1.2 million less this year than in 2020. The figure is a little misleading, because CIG limited sales of the newest ships. I take that as a sign CIG isn't doing badly for money. 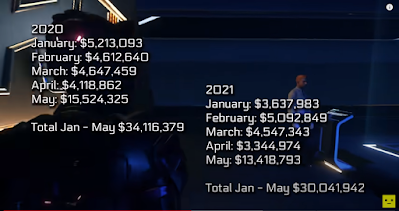 Through the end of May, BoredGamer showed funding had slowed from 2020's $34.1 million down to $30 million this year. I have to wonder if expecting CIG to raise another $79 million in ship sales in 2021 as it did last year was ever realistic. When CIG releases it's 2020 financial numbers in December, we may see the company raised $100 million from all sources last year. I hope raising that much money put CIG is a good place financially. If so, then averaging $6 million is ship sales through the first 5 months should keep up with the day-to-day expenses.

We won't really know until December, but anyone thinking CIG will run out of money probably has a long wait. Still, I don't believe the company has enough money to fund them through 2025, so expect the money machine to roll on.