Near the end of the fighting in Delve, CCP made a temporary change to market fees and taxes that some voices claimed placed a severe disadvantage to one side of the conflict. The three month deal meant that selling items in NPC stations in Jita was cheaper than using the Tranquility Trading Tower Keepstar in Perimeter. The TTT Keepstar is a player-owned Upwell structure owned by Test Alliance Please Ignore and whose proceeds were divided amongst the major null sec powers. According to public statements made by The Mittani, 20% of revenue went to The Imperium with the other 80% split between the leading powers in PAPI.

Up until the change, which was announced on patch day, the TTT Keepstar had been the preferred place to sell high value items like PLEX. Once the patch went live, the sell orders for PLEX quickly shifted from the TTT Keepstar to the NPC-owned station of Jita 4-4. While we don't have the data for August, I took a look at broker fees and the PLEX market in The Forge to see if I could find anything interesting. 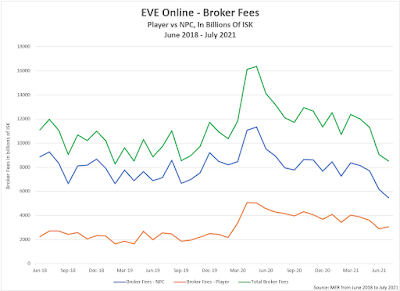 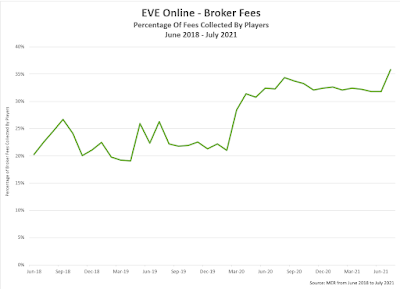 What changed in March 2020? On 10 March CCP instituted a Broker Relations patch. The devs made the following changes.
Some of the increase in broker fees received was a result of CCP forcing some structure owners to actually charge fees. Of interest to those following the war is that the changes did not necessarily enrich the owners of the TTT Keepstar, as they were already charging a 0.5% fee. An increase to 1% with NPCs taking half resulted in no net change. 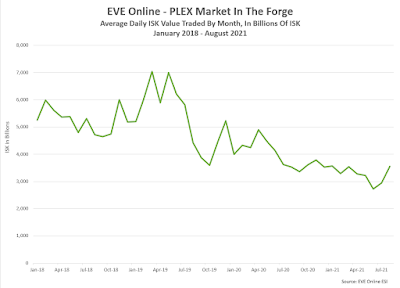 The Forge is the place in New Eden where PLEX is traded. In August 2021, 77.7% of all PLEX traded in the game were traded in the region. Until the temporary changes went into place on 27 July, the vast majority of those transactions took place in the Tranquility Trading Tower Keepstar. But even before the change, the ISK value was declining. In May 2019, players spent 7 trillion ISK per day buying PLEX. In June 2021, that amount had fallen to 2.7 trillion ISK per day. A 61% decrease in traded ISK value over two years is a fairly big decrease in potential income for large player groups.
Even before the temporary changes in July, the consortium running the TTT Keepstar had to have experienced declining income. The value of PLEX sales in The Forge declined by 34% from June 2020 to June 2021. 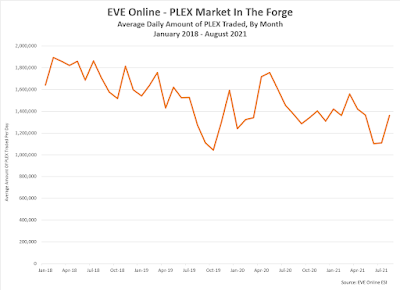 The ISK value of the PLEX traded in The Forge, even with the recent uptick in sales, still falls below the amount sold in the aftermath of Blackout in 2019. But what about the actual amount of PLEX traded? During the course of the war, the amount sold remained fairy stable. From July 2020, the first month of the war, to May 2021, the average amount traded daily only fell 6.1%. The ISK value of the trading fell 11% during the same period. The big drop in trading occurred in June and July when the PAPI alliances told their line members to not worry about the summer and come back to the game in September. The amount of ISK traded in The Forge dropped by 19.2%, or 263 thousand PLEX per day, from May to June. The decline equates to over 15,700 months of game time. The amount of PLEX traded bounced back to May levels in August as the evacuation from Delve commenced.
What did I gather from looking at the data? First, CCP's Broker Relations patch in March 2020 successfully increased the percentage of ISK players collected from broker fees. A strange move in the middle of the Scarcity Era, but a successful move nonetheless. Next, that the COVID lockdown bump really only lasted 2-3 months, returning to normal sometime in August or September 2020. Normal, unfortunately, is below the levels seen prior to Blackout in the third quarter of 2019. Finally, the summer vacation declared by PAPI really hit demand for PLEX hard, with in-game sales declining by almost 20%. The decline in PLEX sales tracked fairly closely with the decline in average concurrent user numbers over the same period.
One question I cannot answer from looking at the data is the future of the TTT Keepstar. We don't know if CCP will make the market changes introduced on 27 July permanent. But for now, we can try to look at the data to make an educated guess.
Posted by NoizyGamer at 1:00 PM