Looking At Dotlan Data For August 2021

All the talking heads in the EVE media love to discuss the monthly economic report. But the first available data for a month is found on the popular EVE map website Dotlan. With the PAPI super coalition and Legacy coalition broken up and in full retreat to the other side of the cluster, I thought I'd use the date available on Dotlan to see what happened in August. 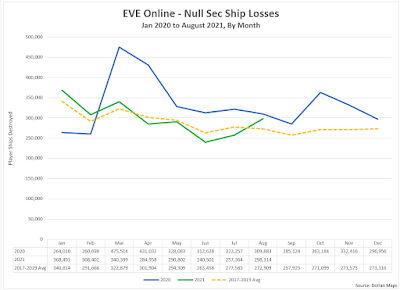 The first is a look at the number of player-owned ships destroyed in null sec. The data shows the COVID lockdown effect as players flocked to play EVE in March and April of 2020 due to the worldwide COVID lockdowns. Using the first three years of the Alpha era as a baseline, ship deaths in null sec remained above the 2017-2019 average from March 2020 to March 2021. Ship deaths dropped below the three year average from April 2021 to June 2021. In August, the destruction once again exceeded the 2017-2019 average by increasing 15.9% compared to July. 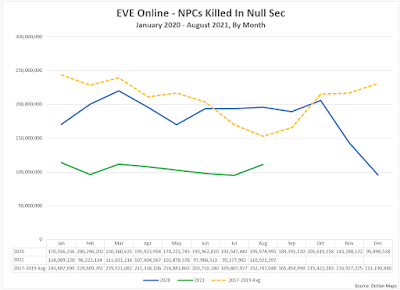 The story about players killing NPCs in null sec is different. Over the last 20 months, the only months that exceeded the average number of NPCs killed in 2017-2019 were July through September 2020. The big drop in NPCs killed occurred in November and December with the introduction of the Dynamic Bounties System and changes to the Encounter Surveillance System on 10 November 2020. Of course, the war moving closer to Delve may have also influenced the decline.
In August, the number of NPCs killed in null sec increased by 16.5%. With the Imperium no longer having to worry about most of the major alliances camped in Delve and Querious, how much higher will the number grow? 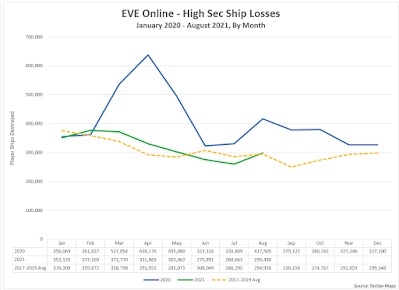 In high sec, a similar pattern emerged. In March and April 2020 ship deaths dramatically increased in high security space. The ship losses continued beating the 2017-2019 average until January 2021. But the numbers exceeded the average from February to May, dipping below the average in June and July. In August, the number of kills rose by 14.9% to inch ahead of the average once again. 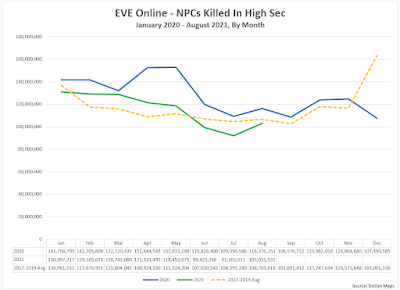 A common claim is that null sec players have moved their income generation to high sec. If so, the number of NPCs destroyed doesn't back up the narrative. November and December 2020 did not show an increase in NPCs killed in high sec to correspond to the massive drop in NPC kills in null sec. The number of NPC kills dropped below the 2017-2019 average in June and, despite an 11.8% increase in August, remain below the average. 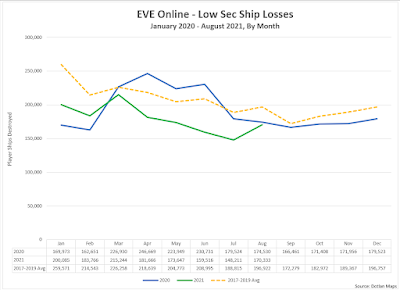 Looking at the data for low sec shows just how badly the region had fallen. In January 2020, the number of player ships destroyed was 34.5% less than the average ships killed in the same month in the period 2017 to 2019. The March 2020 surge only brought low sec back to the average. The security band did top the average in April, May, and June, but slid under again with the start of the war in July 2020. In August 2021, the number of player ships destroyed increased by 14.9% but still trail the baseline 2017-2019 average by 13.5%. A figure that doesn't sound good until compared to the numbers in January 2020. 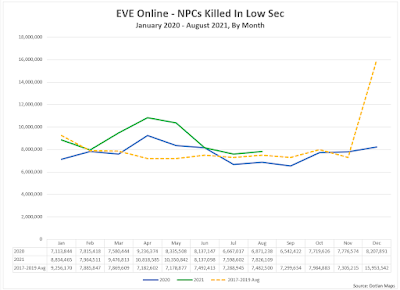 Last and arguably least is the data around players killing NPCs in low sec. But a strange thing happened. While the beginning of 2020 roughly followed the pattern experienced by ships dying, 2021 saw NPC kills exceed the baseline average beginning in February 2021. August extended the streak to 7 months in a row with a 3% rise compared to June.
With the numbers shown by Dotlan, one would expect a big downturn in player activity in June and July, with an fairly big uptick in August. According to the latest average concurrent user graph published by Ripard Teg yesterday, that is what happened. The ACU rose from 17,000 through much of July to over 20,000 users throughout August. The data indicates the increase occurred throughout known space (wormhole and Pochven data is unavailable), although not so much in low sec.
Posted by NoizyGamer at 4:00 PM