Another day, another Star Citizen kerfluffle. I swear, the news wouldn't flare up so much if Cloud Imperium Games hadn't already secured over $500 million in funding for Star Citizen and its single player game Squadron 42. The latest rumor is that CIG is developing a third game, Theaters of War. Massively OP reported on the rumor.

Assuming this rumor holds any truth, it would appear that the scope of Theaters has changed. A leaked list of games for GeForce has among them Theaters of War (found in lines 1915 and 1916 of the GitHub link or with a search for “Theaters”). The prevailing assumption is that a game mode wouldn’t get its own separate database listing, particularly since Star Citizen and Squadron 42 each have their own database listings as well. This list of games has many players assuming that Theaters of War is now being turned into its own standalone title and is being released to PC and console, owing to the fact that Theaters of War has two listings.

I figured I'd let everyone online go crazy on forums and Reddit and look elsewhere for proof of CIG using money designated for Star Citizen/Squadron 42 development on a third game. Instead, I searched trademarks listed with the United States Patent and Trademark Office

After a little internet detective work, I searched on the company that files trademarks associated with the game, Cloud Imperium Rights LLC. I found 22 live trademarks, of which one was dead. What caught my interest was that five of them did not have a registration number, meaning processing the request was not complete. 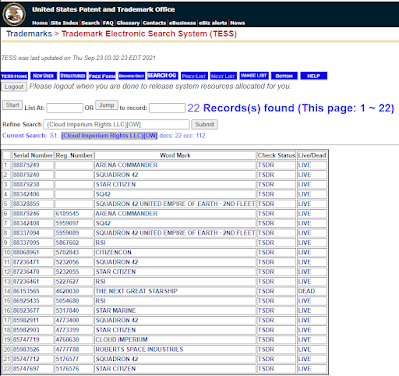 For the original task, finding any new trademarks for Theaters of War, I found none associated with Cloud Imperium Games or their lawyer John Paul Oleksiuk. As far as the new entries were concerned, if CIG comes up with new artwork for their logos, that would require a new trademark. But I clicked the entries just to see what popped up.

For example, entry 88342406 concerns Squadron 42 and what I assume is a new logo. In the description of the goods and services of the product, there were two entries.

I figure CIG came up with a new logo for the marketing campaign and want to protect it prior to release of the game. The fact the trademark was filed on 15 March 2019 and published for opposition on 29 October 2019 and is still ongoing has me wondering why the process is taking so long. Otherwise, nothing out of the ordinary.

What really caught my eye were the top three entries. They were all filed the same day, 20 April 2020. Below is a screen capture of the one for Star Citizen. 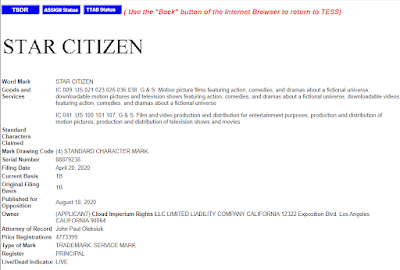 In the Goods and Services field for all three trademarks, no mention of video games. Instead, the entries were all about motion pictures and television shows.

Then I looked at prior registrations. Sure enough, the original trademark covered video games.

Trademarks don't expire unless unused, but I think I understand why the new trademark application to what appears an existing trademark. No, despite Chris Roberts' reported history of using money designated to fund game development to make movies, I don't think he's making a Star Citizen movie. I think CIG is worried about fans making their own films using trademarked game logos. For example, the below 15 minute short video from 2018 starts out by showing the Star Citizen logo.

Having reviewed Chris Roberts' history, I'm sure he would love to make a full-blown Star Citizen movie. But for now, I think the company's lawyers are looking to restricting fan films, or at least the use of CIG's trademarks.