August 2021 was the last month of significant conflict in Delve in the great null sec war of 2020-2021. With EVE now in the midst of its traditional seasonal low point of the year, now is a good time to look at the state of the EVE economy using the latest monthly economic report. 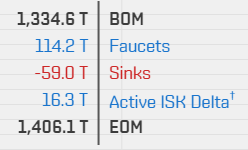 The summary found on the ISK Sinks and Faucets chart shows the money supply grew by 5.4% in the month of August. Of note is that faucets funneled almost twice as much ISK into the game economy as the sinks were able to extract. A major cause of the increase was 16.5 trillion ISK CCP distributed to players in a promotion that ran from 27 July to 3 August. The sudden faucet made up 14.4% of all ISK faucets last month. 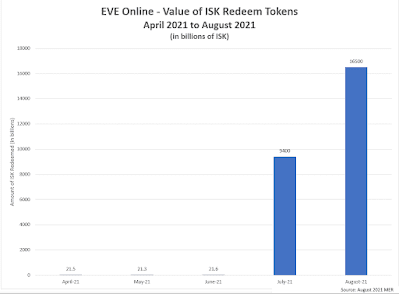 Another interesting bit of information was the 16.3 trillion ISK Active ISK Delta. CCP defines the Active ISK Delta as "The net effect of ISK coming and going with player accounts, including all GM actions." A positive value indicates that more players returned to EVE than left the game. August was also the first month EVE experienced a positive Active ISK Delta since April 2020. Presumably the major cause was the anti-climatic battle at the beginning of August in Delve and the subsequent retreat that led players to log in to evacuate their belongings. 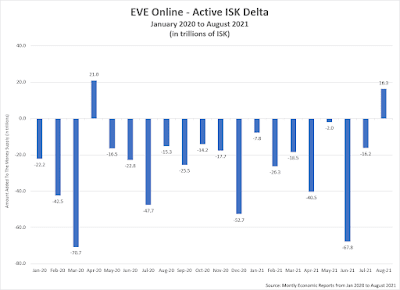 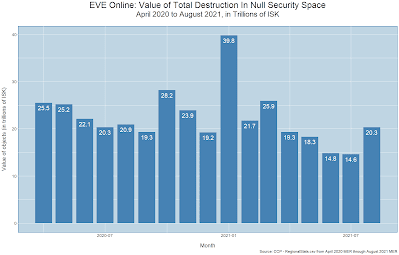 Trying to piece together PvE income in null sec is harder now that ratting falls in three categories: Bounty Prizes, Commodity (Market), and ESS Main Bank Autopayment. In August, the amount came up to 36.5 trillion ISK, up 22.5% from July's 29.8 trillion ISK. 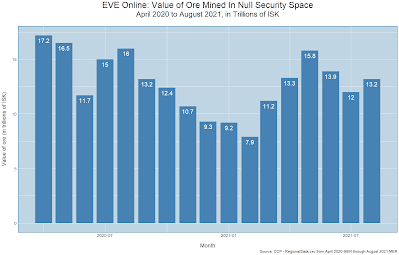 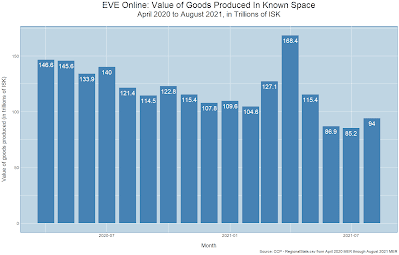 Production in New Eden rose in August, rising 10.3% from July's low of 85.2 trillion ISK. EVE's industrialist are still not producing at full capacity, with last month's production down 34.3% compared to August 2020. 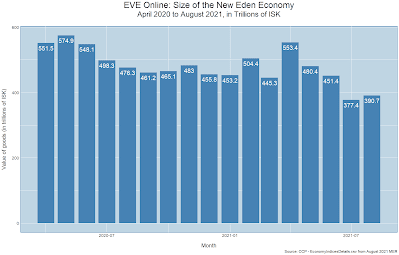 When looking at the size of the New Eden economy as measured by the value of the four major economic indices, the economy grew 3.5% in August. The growth was not strong, especially as the July total was the lowest in 5 1/2 years. Last month's total of 390.7 trillion was still 18% lower than the value of the indices in August 2020. 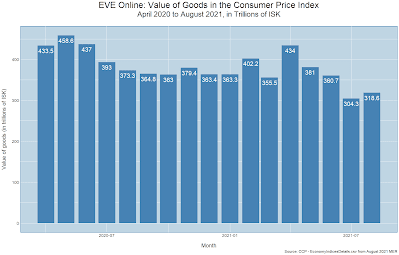 Finally, the value of the goods in the Consumer Price Index rose 4.7% from July to August. Of the 14.3 trillion ISK increase, the RMT tokens (skill injectors, skill extractors, multiple character training certificates) only accounted for 900 billion of the amount. Year-over-year, however, the value of the CPI decreased by 14.7%.
What the August MER showed was an economy still struggling despite an injection of 25.9 trillion ISK into the economy in late July and early August by CCP. Historically, August is a slow month in EVE, but even for August the numbers are down. If the average concurrent user numbers are any type of indication, players should see the economy perform fairly similar to August's activity in September.
Posted by NoizyGamer at 6:00 AM