EVE Online Is Recovering After The War

Over the weekend I thought I'd run a couple of data sites in the new Researching the Rogues event in EVE Online this weekend. I went through my normal route looking for sites through both high and low security space and didn't find any. Worse, low sec was pretty busy. I went through one gate and found two Worms on the other side. The Gurista faction frigates are formidable at the best of times. Uncloaked in an unarmed Cheetah covert ops frigate? Fortunately they were interested in PvE. Plus, I'm still pretty good and cloaking and zooming off a gate.

My trip was a reminder that Brave Collective has moved into Geminate and will probably roam around Minmatar low sec looking for content. Of course, Psychotic Tendencies. are currently fighting Brave's efforts to move into the F-ZNNG constellation which opens into both Metropolis and The Forge. Maybe Brave will get busy protecting their new space. But for now, I expect them to roam around looking for the elusive fun per hour. 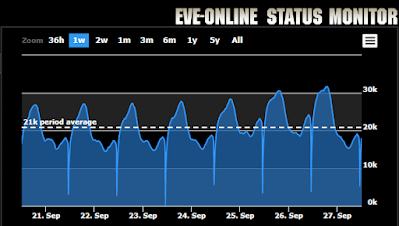 One hopeful sign of recovery was that the peak concurrent number of users exceeded 30,000 on both Saturday and Sunday. Over the last 7 days the average number of concurrent users increased up to 21,000 according to EVE-Offline. The line on the graph had dropped down to 20,000 earlier in September, but yesterday's PCU of 31,630 helped lift the average.

I docked up in a station I hope will give me some options as to where to go tonight to find one of the event data sites. I'm curious to see what drops when I hack a couple of cans. I may wind up in null sec just because I think people are coming to low sec for better drops. But with the war over, I'm starting to see some signs the game is getting better just flying around in space.

Posted by NoizyGamer at 9:00 AM