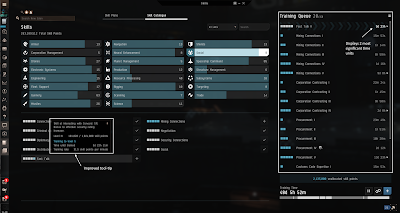 One of the amazing things about the skills changes is how the reaction to the user interface totally overrode all the other changes, some of which were on players wish lists for years. The Alpha skill queue is now the same as the Omega skill queue. The overall number of skills players can queue rose from 50 to 150. Players can now share skill plans they or their corporation make with other players in the client. CCP created Certified Skill Plans for new players to use. The developers even tried to rearrange the UI to make players happy.

The skills window will be removed from the character sheet panel and be given a new, fully separate window, accessible directly from the NeoCom. It will be divided into two main sections: Skill Plans and Skill Catalogue. While the first section will contain the whole interface related to Skill Plans, the other one will show all skills and the level you have trained for each, similar to how the current skills panel does. If you don't plan on interacting with the Skill Plans, they won't be in your way and you will be able to train skills as you do today. One thing worth mentioning is that there will be a return to the horizontal arrangement between the skills catalogue and the training queue. Your requests for this have been noted, and the hope is that the new skills screen will be easy and enjoyable to use. Be sure to give us your feedback on the new interface changes! (emphasis mine)

To my eyes, the changes that still bug me are the times listed in the training queue and the lack of seeing how many skill points are required to obtain one level of a skill.
The times displayed in the training queue seem chosen for formatting purposes. The two most significant time units are displayed in a right-justified field. While this helps with formatting when adjusting the size of the UI, seeing 5d 23h is different from the 5d 23h 33m 16s I've looked at for years. But if I really want to see the seconds tick down, I can see that during the last hour the skill trains.
As for the displaying the number of skill points needed for a single skill level instead of training the skill completely to level 5, I don't really have an issue. I'm just used to seeing the number. However, considering players can get skill points from sources other than the skill training queue, I can imagine a significant number of players would like to micromanage which skills receive skill points from their unused skill point pool.
Honestly, except what I mentioned above, I don't have a problem with the new user interface. I imagine the UI will receive a few more minor tweaks. I hear the skill categories use English to sort by and that needs to change for non-English EVE clients. But given I maybe check my skill queue once every month or two due to the existing skill queue length, the changes don't really affect me.
Posted by NoizyGamer at 12:00 PM