About Those Rumors About Google Buying Twitch TV...

I'll have to admit I'm trying to spend a little more time in EVE these days.  That means less time blogging.  But I do watch a lot of YouTube videos about video games, Gamebreaker TV when a new episode of a show pops up, and a couple of Twitch streams when something interesting catches my eye.  So let's just say the latest news about Twitch caught my eye.  Let me just quote the piece from PC Gamer's Hayden Dingman:

Twitch, which in the past has been very lax when it came to copyright enforcement, is now scanning archived stream videos for infringing content with the help of a company called Audible Magic—infringing content including in-game music. Like, for instance, any of the radio music in Fallout 3. Valve's own official videos of the recent Dota 2 tournament The International were briefly silenced for containing music from—wait for it—Dota 2.


This Audible Magic software is pretty strict, as it even flagged a Twitch TV show. 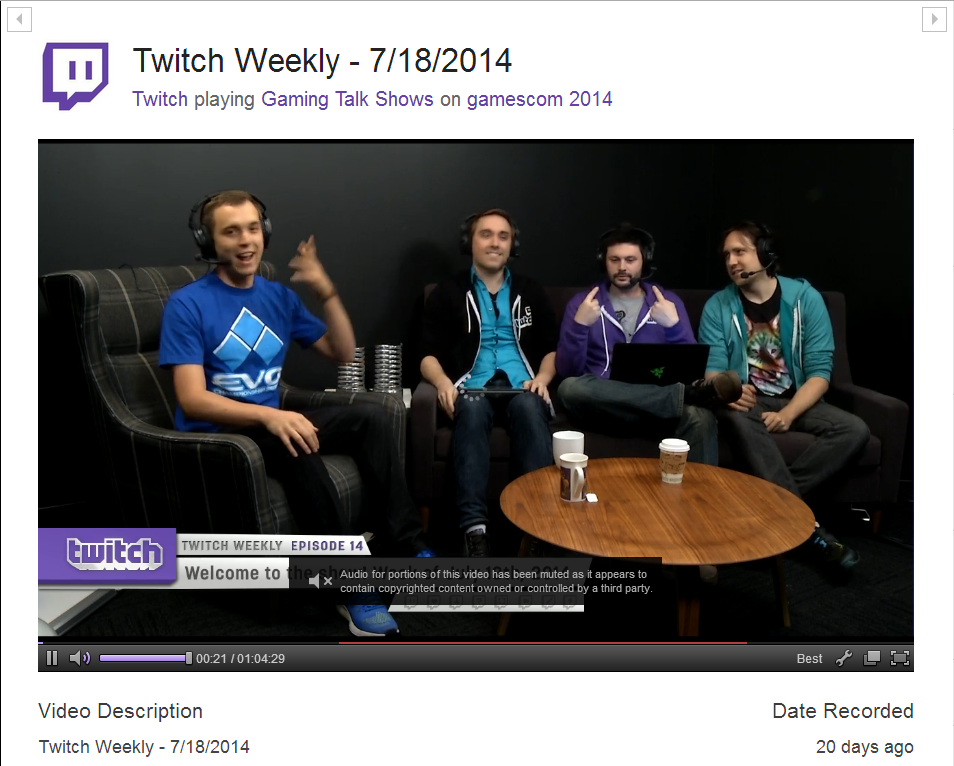 Now, none of this is news to me.  Google is pretty strict on YouTube about copyrighted music and other content.  Violations can result in not just a portion of a video muted, but a person's whole YouTube channel taken down.  The rule for YouTube is: don't play the audio from video games.

That advice is kind of hard for Twitch streamers to accept, since the reason they are on Twitch is to stream video games.  But I guess a lot of streamers don't just stream the game music, but the music they listen to while playing.  Or, like Mad Ani used to do, he'd just put up the stream and a playlist and walk off for hours at a time.  I have the feeling it's the Mad Ani's of the world that have brought the wrath of the music industry down on Twitch, YouTube, etc.

Copyright-free music does exist for streamers to use and people are passing the information around now.

@Powersv2 @wilhelm2451 @noizygamer There's a few places to get general royalty music and they'll cut you a certificate to say you have perm.
— Sean Conover (@seanconover) August 7, 2014


I just hope that CCP has made sure for the Alliance Tournament that, if they have submitted any EVE music for copyright protection, that they've cleared its use with Twitch.  Hopefully they don't have a Valve moment.
Posted by NoizyGamer at 8:29 AM