July traditionally is a time in EVE Online when player activity slows down and 2014 was no exception.  The main Tranquility shard saw a 6% drop from June to July in the average concurrent user mark1 and a 7% drop in the number of ships lost by players.  The drop in the ship losses in high sec (5.2%) and low sec (5.5%) were similar, with null sec witnessing a double-digit percentage drop (11.1%). 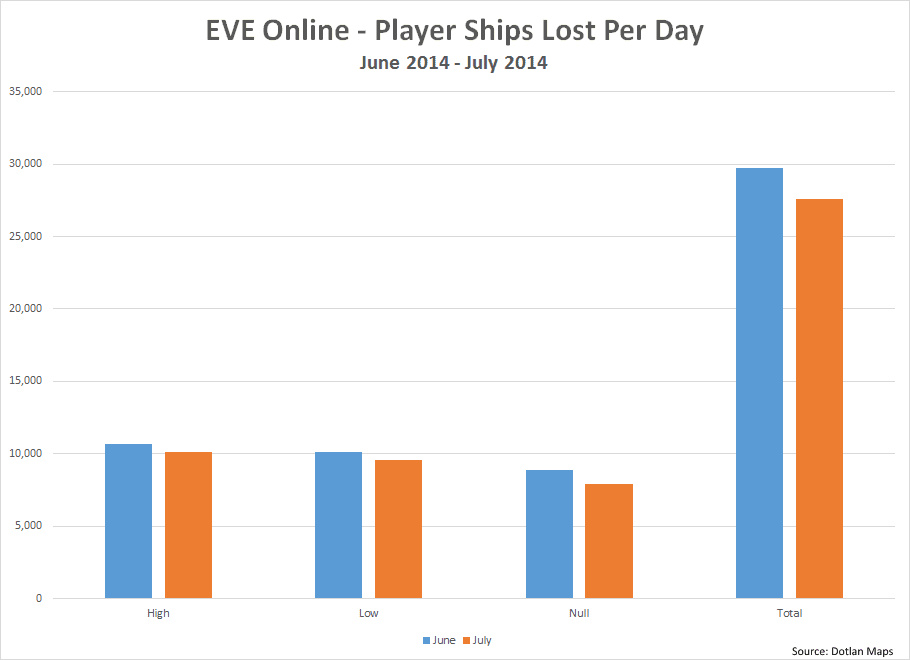 Of course, many players involved in factional warfare won't believe the numbers for low sec.  For them, the fighting is plentiful and better than ever.  Looking at Dotlan Maps most violent systems in July 2014 explains why. 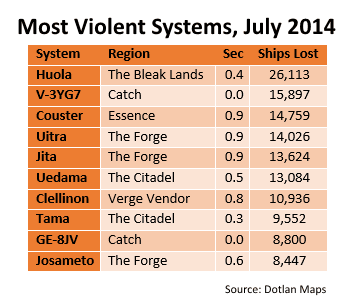 For the first time in Dotlan's records going back to January 2010, a factional warfare system had the most ship losses in a system in New Eden.  In fact, the battle for Huloa resulted in twice as many ship losses than any other FW system had seen in the past 4 1/2 years. 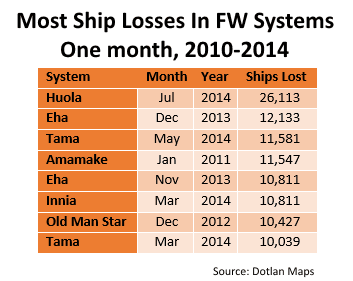 July was only the eight time Dotlan has recorded ship losses in a factional warfare system exceeding 10,000 in a month.  Of those eight times, four have occurred within the past five months.  So while July saw the fewest number of ship losses in low sec since the Retribution expansion launched in December 2012, factional warfare pilots continue to see larger and larger battles for control of key systems.

The two null sec systems on the list of the most violent systems, V-3YG7 and GE-8JV have two things in common: Brave Newbies and H.E.R.O. Coalition.  BNI likes to fight and somehow always seemingly find themselves involved in a system or two on the most violent lists.  July's fighting in Huola did not result in the most ships lost in a single low sec system in 2014.  That mark was set in Sendaya in March when BNI and H.E.R.O Coalition deployed to the low sec entry system to Curse and saw 38,686 ships explode.

Throughout this post, I've made a point of using the term ship losses.  That is because the ship losses recorded on Dotlan include both PvP and PvE losses.  The biggest examples of this are the systems of Clellinon, Couster, and Uitra.  These three 0.9 security systems are home to career mission agents.  With some of the missions designed to make new players experience ship loss, the ships killed count can get rather high.  Looking at these kills is an indication of where new players are deciding to start the game.  Apparently, new players like playing the Caldari and Gallente.

The number five and six systems on the list, Jita and Uedama, are notorious high sec systems full of suicide gankers and high sec wardecers.  Jita, as the game's major trade hub, brings targets to a central location while Uedama is a vulnerable chokepoint that freighters and other cargo carriers must travel through in order to keep New Eden's supplies flowing.

The number 8 system on the list, Tama, makes frequent appearances on Dotlan most violent system lists.  Tama is another factional warfare system located in the Caldari region of The Citadel.  Apparently someone forgot to tell the Gallente militia, as the Gallente have held the system since early March.

The final system on the list, Josameto, is one of the four main systems in which Red Federation and Blue Republic battle in their forever war.  The systems of Josameto, Liekuri, Otela, and Poinen are frequently spotted on Dotlan's most violent system lists.

1.  As calculated from EVE- Offline.net through 27 July.
Posted by NoizyGamer at 7:07 AM