Thanks for all the years of Blink that we've spent together. It's been a long four years-- some of it longer than others!

Unfortunately, as of today, Blink is going to go on extended-- perhaps indefinite-- hiatus. CCP has gone back on everything they said several months ago, and the resulting environment is so hostile that it's not one we want to try to operate in, if CCP throws us under the bus after asking repeatedly for confirmation.

If you have prizes waiting, they will be fulfilled. You can claim prizes as normal. Bonk tickets have been refunded to your account balance. We will begin refunding all account balances of people that have played in the last 6 months, starting with balances over 5 million ISK. As always, we're not in the business of stealing your money.

It's been an absolute pleasure to meet many of you, through Blink, Eve, and our lotteries channel. Thank you for the experience.

We’re aware that SOMER Blink has posted a message to state that their services are shutting down.

We’re also well aware that a lot of members of the community have enjoyed playing SOMER Blink over the course of the last four years, and it’s very unfortunate and saddening to see a source of enjoyment for our players closing its doors.

In the same respect however, we believe that the promotion that caused this issue was not representative of the original proposal that was brought to CCP.

Given that we’re unable to provide reimbursements as per section 1.3 of our reimbursement policy, it’s good to see that SOMER Blink is shutting down in a controlled and stable manner, and that players will be able to withdraw their ISK and / or assets.

While we will be monitoring this closely, we have no intention of interfering with this process, as we feel that allowing players to be able to have their assets and / or ISK returned by SOMER Blink of their own free will is an important part of bringing this situation to a solid resolution.

We’ll have more information for you guys tomorrow, once myself and CCP Leeloo get back into the office and speak to the relevant people, including the CSM.

This remains a top priority for the community team, those involved in other parts of CCP, and the CSM.

Thanks for your patience while we work on bringing this to a close.

I'll just post a graphic of the proposal one more time. 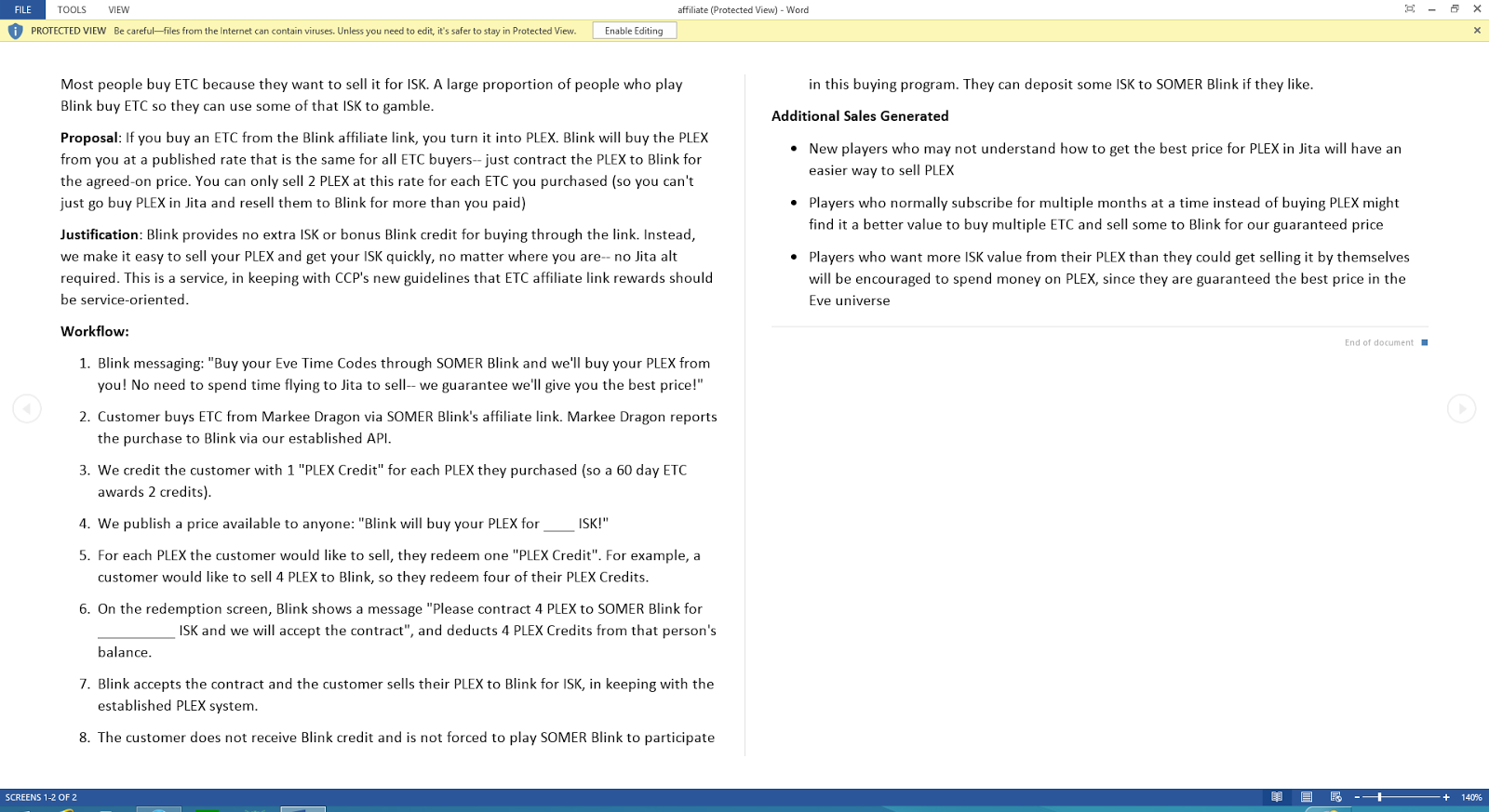 I'm not going to lie.  Any respect I may have had for SOMERblink and Somerset Mahm disappeared last November when he held a liquidation sale to squeeze as much RMT money from his ISK as possible.  At that point, he revealed himself as just another RMTer.  So when CCP halted the latest SOMERblink RMT scheme that was unveiled this weekend, I was glad.  Somerset's leaking of correspondence between CCP and himself revealed someone taking advantage of someone who didn't suspect deception.  In effect, we witnessed the Vice President of Global Sales reduced to the level of a rookie GM getting petitioned for a ship loss.  I suspect she is not familiar with the culture within EVE and fell prey to a scam.  At least, judging from CCP Falcon's forum post, what CCP considers a scam.

Unlike some people, I'm not going to celebrate the passing of SOMERblink.  In my eyes, CCP has just convinced another illicit RMT operator that he cannot make a big enough profit in New Eden to justify the time investment.  What I hope happens is that CCP takes a careful look at what happened so these events don't happen in the future.  So on that front, I don't consider the SOMERblink scandal of 2014 closed quite yet.
Posted by NoizyGamer at 6:00 AM