Is EVE A PvP Game?

A couple of weeks ago, Mike Azariah asked an interesting question on Twitter...


He followed that up with a blog post last week with his opinion and asking for others to try to sum up what type of game EVE is in one or two sentences.  I think answering the first question, whether EVE Online is a PvP game, or a game that has PvP as a part of it, goes a long way in determining how people look at EVE.

Perhaps not surprisingly, as someone who has appeared on four killmails over the past three years (two kills, two deaths), I believe that EVE is a science-fiction world simulator that uses PvP as the driving force for its economic model, and not a PvP game.  But is that opinion just formed from my unusual playstyle?  I don't think so.


CCP, despite relatively recent efforts to hide EVE's subscription numbers, still is one of the most open gaming companies where game data is concerned.  Players have taken the information from EVE's APIs (and now public CREST) and created web sites that provide game data to the community going back years.  I'll use two trusted sources of information for this post: Wollari's Dotlan Maps and Chribba's EVE-Offline.net.

The first question I'll address is: what is the ratio of player ships killed to NPC ships (including rogue drones) killed.  If EVE is a PvP game, I would expect a very low NPC to player ships killed ratio.  If EVE is a game (or a simulation) that only has PvP as an element of the virtual world, I would expect a high ratio.  The results may surprise some non-EVE players. In July, the ratio was 296 NPCs killed for every ship a player lost.  I use the word "lost" instead of "killed" because the data available at Dotlan does not separate out ships lost to other players versus ships lost to NPCs.  The only region that had a ratio I would expect from a PvP game that contained NPCs is low sec, with a ratio of 27:1 in July.  The other two areas, high sec and null sec, both have ratios I would expect in a PvE game.  Indeed, those K/D ratios are a lot better than I had playing my ranger in Everquest 2 on a PvE server.

Because peace has recently broken out across null sec, I added the period from January 2013 to June 2014 to the chart.  That period encompasses two major null sec conflicts, the Fountain War in the summer of 2013 and the Halloween War in the autumn and winter of 2013-2014.  The overall NPC kill to player death ratio was 248:1 during that time period. 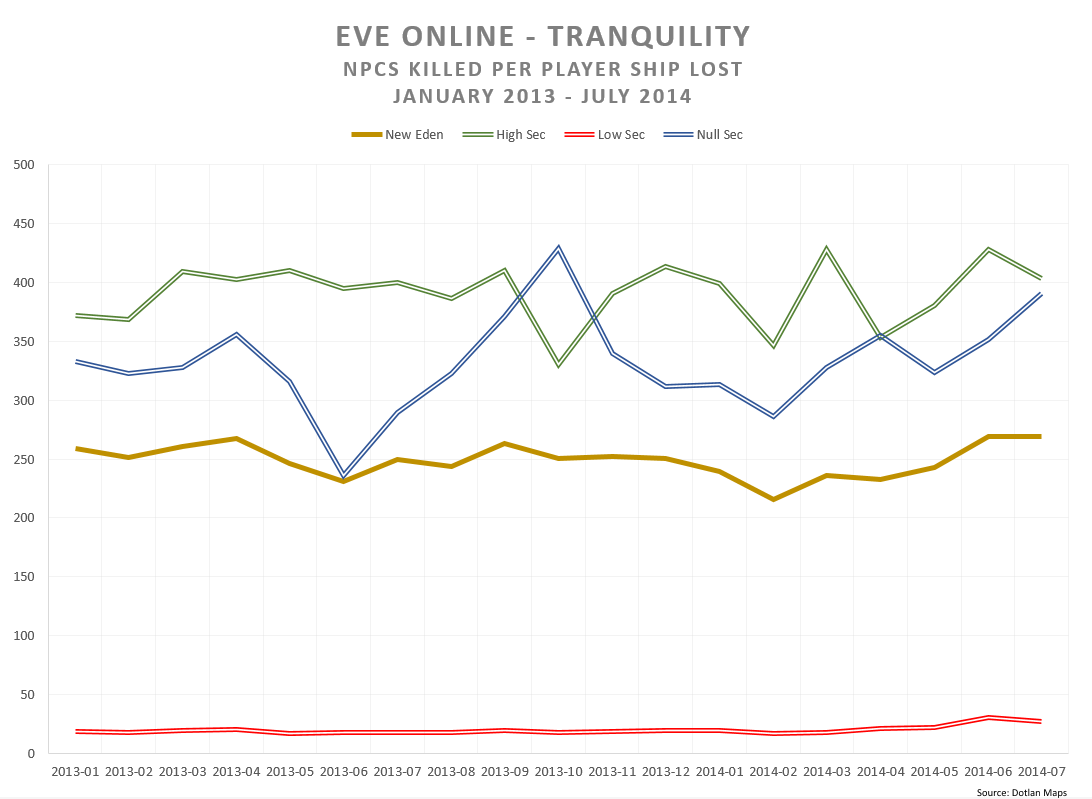 I've included the above graph to show the impact of the two major wars on the NPC kill ratio.  Interestingly enough, the blue line representing null sec is almost the inverse of the average concurrent user mark.  When the ratio goes up, the ACU goes down.  But even with that relationship, the lowest the ratio went during the period was down to 215 NPCs killed for every player-owned ship lost. 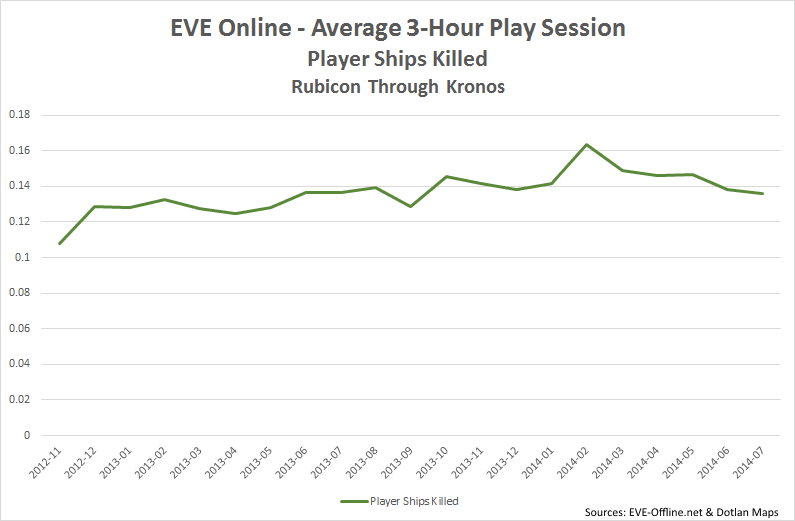 In the first graph, the average number of ships lost looks like zero, but that is not quite true.  This last graph shows that since the ship rebalancing that arrived in the Rubicon expansion, the average number of ships lost in a three-hour play ranged between 0.12 and 0.17 ships.  I should remind everyone that the figure doesn't mean that is how many ships are killed in PvP.  Because Dotlan does not provide a breakdown between PvP and PvE losses, the number of PvP kills per 3-hour play session is less.

When I think of a PvP game, I think of a game like Planetside 2.  If you are not fighting other players, you are not playing the game.  With a ratio of 250 NPC deaths to every player ship killed, EVE players do an awful lot of fighting against non-players.  Indeed, many players rarely, if ever, fight other players.  But for me, the final argument is this: can I go up to someone and, with a straight face, tell them that a game in which the average player in a 3-hour play session will most likely only kill NPCs and not kill another player or have another player kill him, is a PvP game?

I can tell someone that EVE Online has areas specializing in PvP and give advice on where to locate a good fight.  That, I have no problem with.  But after looking at the numbers, can I honestly tell someone EVE is a PvP game?  No.
Posted by NoizyGamer at 6:00 AM