Sometimes I don't feel like blogging. Of course, after not playing video games while in Iceland, I had to make up for lost time. Between a double XP weekend in Star Wars: The Old Republic and a hugs fleet on Saturday against our latest war target, my time was pretty much taken up. So I hope no one minds if I just copy and paste some posts from a botting forum.

I actually created picture files, because this set of forums, for the Eve Pilot series of bots, is open to the public to view.

I first wrote about CCP's efforts to keep banned players from starting new accounts back in 2012. While Team Security is using Big Data techniques to catch people actively breaking the EULA while playing EVE, I'm glad to see they still use their digital fingerprinting technology to at least cause botters issues attempting to create new accounts after bans.

I've told people in conversations that botters aren't exactly the brightest people when the subject is EVE Online, but I don't know if I ever posted that opinion on the blog.

The above poster is a case in point. I guess he's never heard of hyperdunking. Unfortunately, whoever got the kill forgot to submit a bot report. Shame on you, nameless ganker!

Finally, proof that I'm not 100% up to date on everything Team Security does to combat botting. Apparently, getting instruction videos out on how to use bots is, in some cases, a bit harder than before. 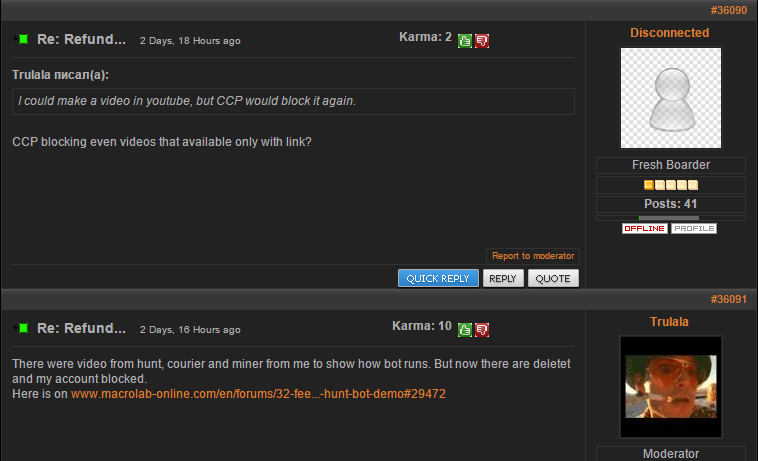 I personally had not heard of CCP taking any action of this type before. But I went to the link in the post and found this: 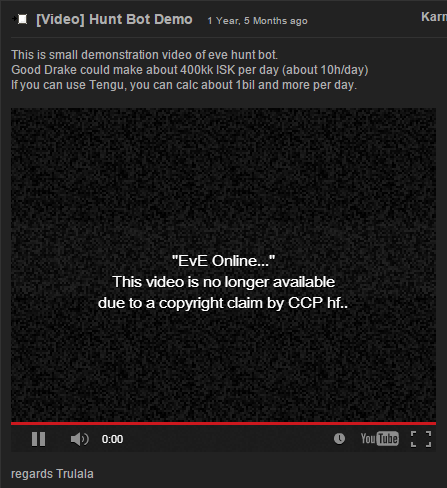 In this case, someone was unable to use the bot and asked for a refund. An instruction video could have helped, but apparently this series of bots only has text instructions. That's one way to stop someone from botting, at least for a little while.

The numbers sound impressive, but that description is from last year. I wonder what the changes to the defensive subsystem has done to the ratting bots who use Tengus. Perhaps that's something to check over the next week or so.
Posted by NoizyGamer at 6:00 AM