How Many Subscriptions Does EVE Online Have In 2015?

Sometimes, subjects come like bolts out of the blue. Take, for instance, EVE Online subscription numbers. CCP stopped releasing the subscription numbers for Tranquility in May 2012. Since then, many players, including myself, have attempted to divine the number. But after a couple of years, the trail grew cold and most lost interest. Which is why last week was so remarkable.

First, ShadowandLight, co-host of the Legacy of a Capsuleer podcast, stated on EVE Radio's TnT show Thursday that "a little birdie" told him that EVE only had 146,000 subscriptions. That number seemed, to state the case mildly, a little unbelievable. Then, incredibly, CCP Leeloo released the following information in a dev blog on Friday:


"Eligible voters cast 36,984 votes, meaning that we have 15% increase since the last year’s election. We have also noticed a 3% turnout increase since last year and it’s a nice trend that we hope to keep for the next election as well."

Mike Azariah, math teacher that he is, wrote a post based on the information released by CCP Leeloo, proving mathematically that the pool of eligible voters, and thus accounts, increased by 14% over the past year. But that doesn't sound right either. We'll blame Mike's mistakes on the fact he's recovering from surgery and his brain's still a little fuzzy. But we do now have numbers to play with.

The basic formula for determining the number of accounts based on election numbers is:

Last year, Ripard Teg did an analysis post on the CSM 9 election returns and came up with the useful chart below.


Ripard determined that the probable number of subscriptions during the CSM 9 election was approximately 380,000. That figure assumed an approximate 5% decline in subscriptions from 2013 to 2014. His logic seemed reasonable at the time and, having reviewed his article, still seems sound.

The important part of Ripard's work was to give a turnout number, 8.2%, I could plug into the formula. CCP Leeloo stated that the turnout for the CSM 10 election was 3% higher than last year. Of course, the 3% figure probably included some rounding. To make the math easier, I'll assume that turnout increased from between 2.6% and 3.4%. If I plug the low, high, and mid-point figures into the forumla, I get the following possible subscription numbers (rounded to the nearest thousand):


As a reality check, the average percentage turnout for the first nine CSM elections was 11.2%. So an estimated 11.2% turnout for the CSM 10 election is totally within the realm of possibility.

Now, I don't want anyone to thing that everything is humming along smoothly, because even the mid-point figure represents an 18% decline in the number of subscriptions over the past 2 years. 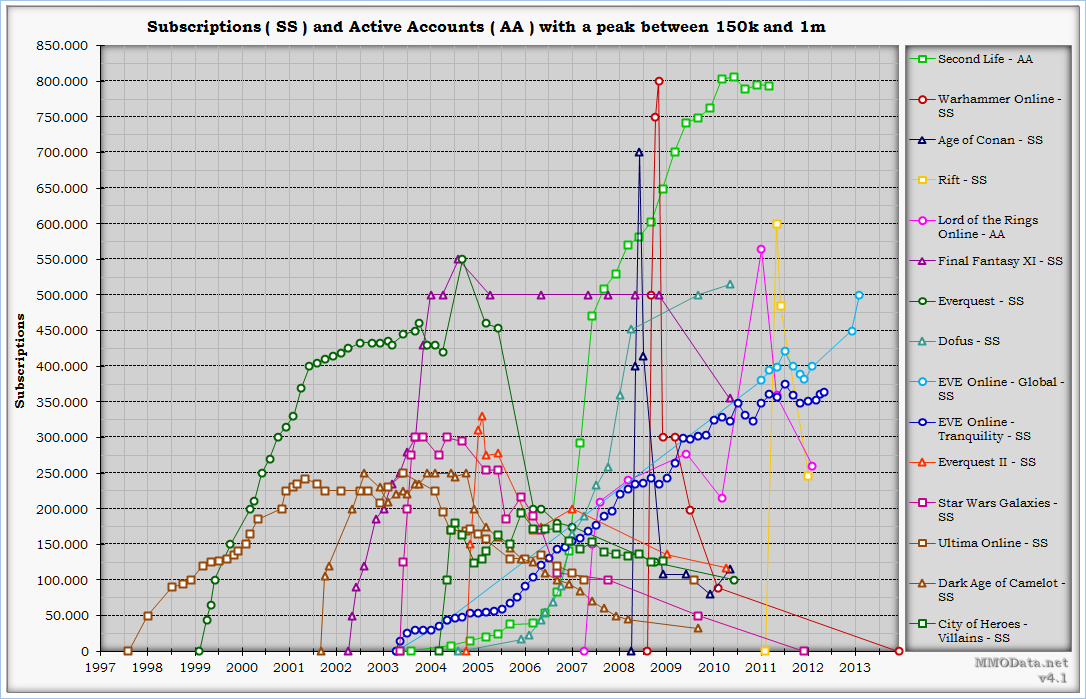 As the last graph from MMOData.net shows, EVE Online most likely is back to the level of subscriptions it had back in 2010.

What about the figure of 146,000 subscriptions sited by ShadowandLight? I think someone is trolling him, playing on the fact that Shadow has claimed that the number of EVE subscriptions has severely declined ever since the beginning of the input broadcasting/ISBoxer controversy started back in November. The figure given fits so well into Shadow's world view that he didn't even think to question its validity.

Let's apply the smell test to the information "leaked" to Shadow. If true, then the turnout for the CSM 10 election was 25.3%. Does anyone think that figure is realistic? I can't find the chart Ripard created yesterday, but if the number is indeed that low, then given the information released by CCP Leeloo, EVE Online gained subscribers over the past year, not lose them like the figures show.

But the biggest strike against the 146,000 subscriber number comes from Eve-Offline.net. While Chribba no longer provides his famous average concurrent user graph, I was able to make graph below. 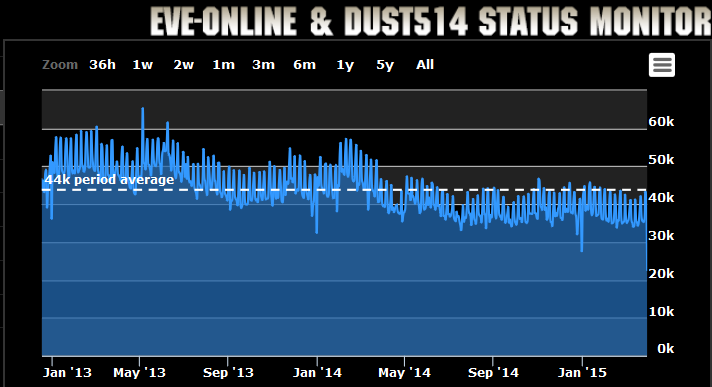 While I don't like using the peak concurrent user numbers since it basically excludes attempting to look at participation in the Australian time zone, the PCU went from approximately 56,000 around the time of Fanfest 2013 to around 43,000 on Sunday. The 23% decrease in players in space correlates fairly closely to the 18% drop in subscriptions using Ripard's calculations from last year plus the information provided by CCP Leeloo give. The 146,000 subscription figure represents a drop of approximately 64% in subscriptions over two years. I just don't see the PCU numbers supporting such a claim.

Perhaps I'm a bit unusual. In my work on writing about botting and illicit RMT, I rarely have official figures to rely upon. Sure, CCP provides the figures two or three times a year, and other companies will sporadically provide information when they conduct a major operation. So I go out and dig up my own. I'm not some media type that sits back and expects the authorities to spoon-feed me the information. And when the subject is the number of subscriptions, companies other than Blizzard rarely publish that information. So, we get to do math instead.
Posted by NoizyGamer at 8:22 AM