The Rising 2021 - My First Experience

I have played Final Fantasy XIV for two years now, but only recently did I start paying attention to the seasonal events. I wasn't high enough level to participate back in 2019, and last year I still had the attitude that the seasonal events didn't matter. Sometime in the past year I decided to at least do what I do in EVE Online and at least check out every event.

Seasonal events in FFXIV usually don't take a lot of time to complete the basic game play, so I went to Ul'dah to participate in this year's edition of The Rising. One of the nice things about events in FFXIV is that they are always a little different from previous years, down to the event rewards. The rewards for the current event, a parasol with a meteor pattern and some fireworks, weren't exciting, but parasols don't take up inventory space so why not? 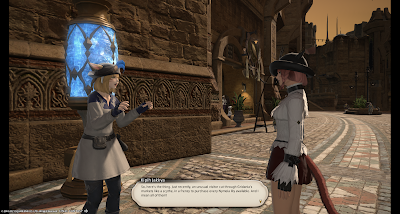 The quest begins with a reporter from The Raven asking for help in tracking down a story. Our first stop was visiting the Quicksand and Momodi. 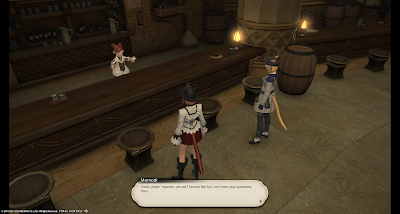 Momodi saw someone up to something involving the Alchemists' Guild. So off I went to visit Severian. Anyone who's leveled alchemist knows Severian doesn't like working, so I wasn't surprised when he redirected us to Deitrich. He told me that the guild had performed a task involving the lilies for a "nomadic minstrel gentleman". So I went to find Kipih and tell her the news. 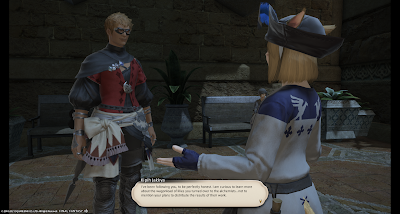 We then went and tracked down the Wandering Minstrel. Players who raid know him as the person who turns normal and hard raids into extreme and savage content. Kipih asked her questions and found out he planned to distribute bundles of potpourri to everyone during The Rising celebration. 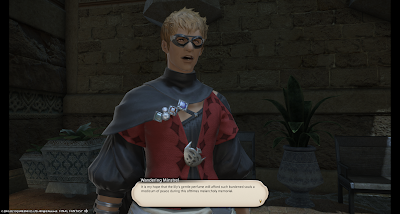 Of course, we were roped into distributing the potpourri. Kipih had the bright idea of going to the Quicksand to hand out the packets to a wider audience. While handing out the packets, I got to hear various memories of the day the server shut down. 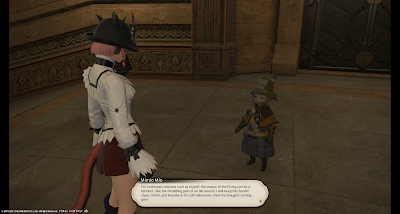 After awhile, Momodi came up and took the remainder of the potpourri. We then returned to the Wandering Minstrel. We talked about our experiences both told to us during the day and some personal stories. 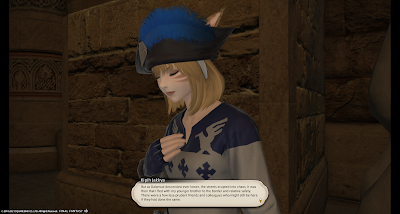 The Wandering Minstrel then shared his latest composition. As he did so, the Echo hit, sending me to another place to meet an unusual person. 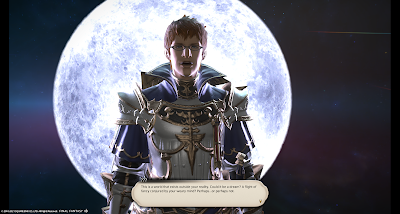 Turns out the Wandering Minstrel is the personification of director and producer of FFXIV, Naoki Yoshida. 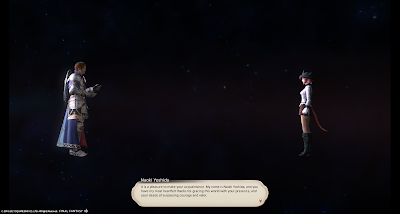 I've never encountered such a scene in a video game before. Here is the entirety of Yoshi-P's message:

It is a pleasure to make your acquaintance. My name is Naoki Yoshida, and you have my most heartfelt thanks for gracing this world with your presence, and your deeds of surpassing courage and valor.

On a day such as today, I hope you will forgive me a brief bout of nostalgia.

It has been an entire decade since I first came to this world. I was a stranger here, a traveler in a troubled land, and the quest for its salvation consumed my every moment.

Countless trials were met and overcome, and the world not only survived -- it flourished. This victory we owe to those who persevered alongside us: to those who explored and nurtured and loved this realm as much as we. Yes, it is you of whom I speak. Of our indomitable adventurers.

Ten years is a long time, yes, but for me the number holds no special significance. It is simply a count of the passage of days.

Success, however, would not have come without that accumulation of daily effort, and that is what makes it a milestone worth marking. Thank you for staying the course with us these many years.

I will keep making plans for this world for the foreseeable future. It has become a part of my life, and to see it grow is an adventure in itself. Rest well, Warrior of Light, for a grand convergence of events approaches. May the road upon which you must embark become the greatest of all journeys. Until we meet again, my friend.

Scarred by the falling of fiery stars, the land is reborn with new life.

God-slayer struck by an echoing roar, heavens ring with the promise of strife.

Beast and man, both, seek freedom or death in bloody inferno untamed.

By unbroken hopes, from a sky long undimmed shall the darknewss of eld be reclaimed.

A merciless gale, an unending road, if this be the path we are fated,

Then pray be our dawn in the rift betwixt worlds, your soul's splendid light unabated. 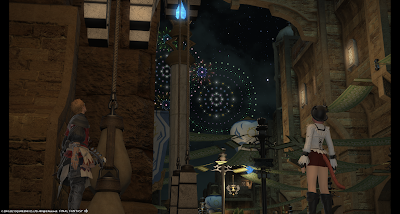 Afterwards I had to check on what the parasol looked like. 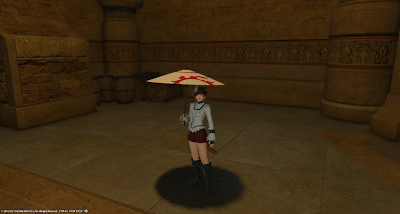 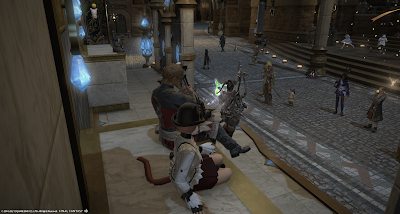 Finally, I used the stage as a background to show off the last gift item. 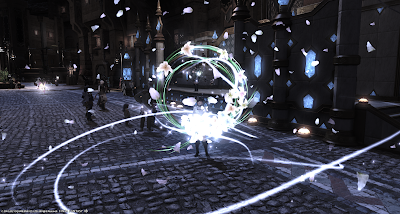 I have to say that I'm glad I took the 15 minutes to run through the quest. While long term players are used to the event, I found The Rising a lot more satisfying than other celebrations of a game's launch that I have experienced in the past.

EDIT 30 August 2021: Apparently the reporter in the quest has a long history dating back to FFXIV 1.0.

During this year's "The Rising" event, The Raven's reporter, Kipih Jakkya, specifically mentions running around before the Calamity to interview people. This ACTUALLY happened. She was controlled by a GM and was presumably responsible for spawning the mobs outside of Ul'dah. pic.twitter.com/AbO85eASpj

Posted by NoizyGamer at 3:30 PM