Every once in a while, I like to play with graphs.  Usually the graphs are related to the illicit RMT markets, but I do like to pull the data from Chribba's EVE Offline website as well.  With the calendar now open to July, I thought this is an opportune time to look back at the average concurrent user numbers (ACU) for the past six months.  Then I realized that I needed to go back to the Retribution expansion to put events into context.  So I did... 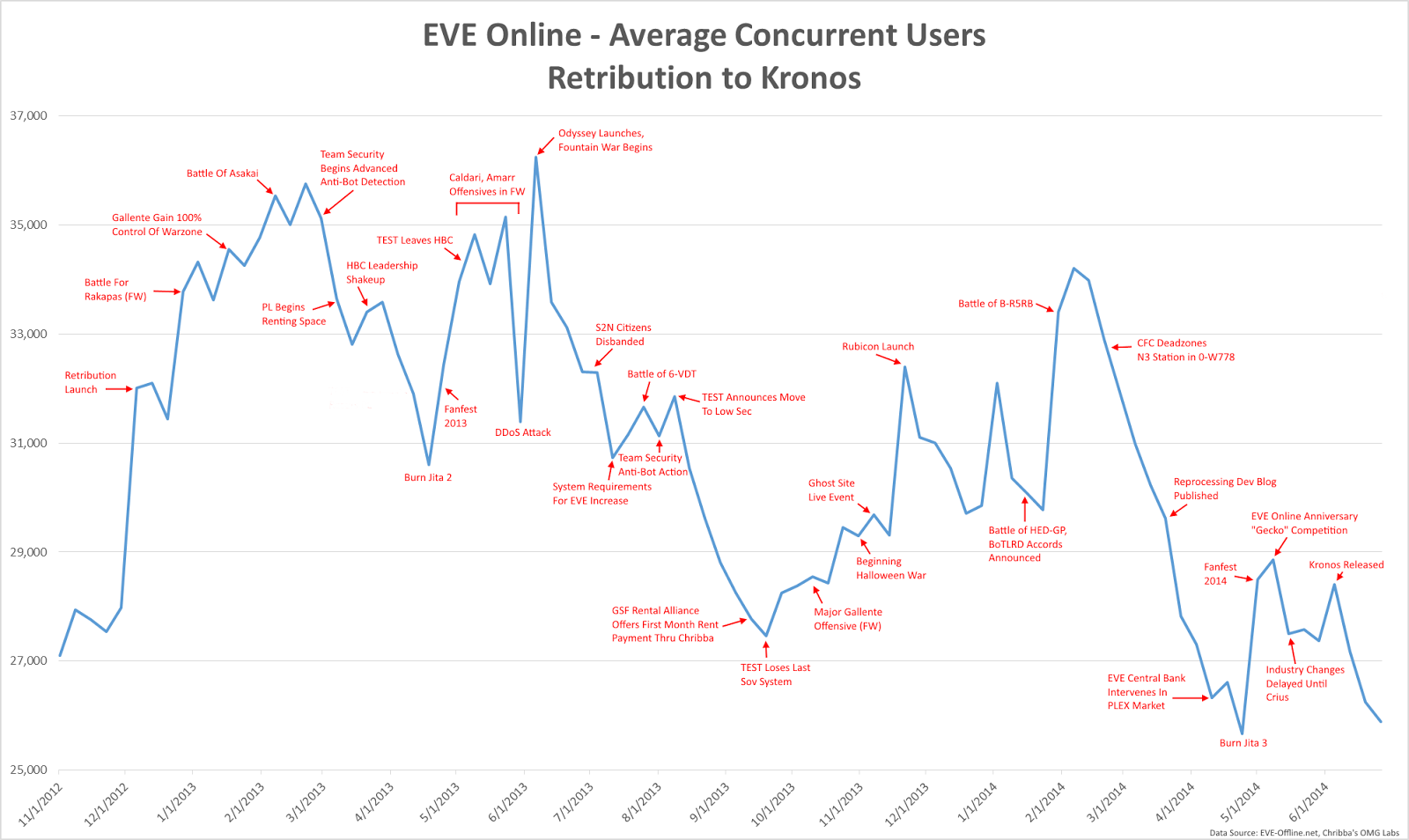 Retribution, which launched 4 December 2012, was a popular expansion.  Launch week saw the average number of accounts logged in jump 12.6%, and the activity stayed above that mark for most of the time until the launch of Odyssey.  Perhaps surprising to many, part of the success of Retribution is attributable to the pilots in factional warfare.  In the early weeks of the expansion, the Gallente militia made an all-out effort to gain 100% control of the war zone, succeeding in January 2013.  While the Caldari militia would gain control of half the war zone again within a month, the Gallente effort showed that a group that historically did not like to plex would if the rewards were high enough.

Factional warfare also had a hand in the biggest single event of Retribution: the Battle of Asakai.  The battle started as a small affair over a small POS orbiting a cobalt moon owned by the Liandri Covenant of the Caldari militia.  In the escalation that followed, Goonswarm (or at least DaBigRedBoat) chose to back the Liandri Covenant while Pandemic Legion backed the Gallente militia in the form of Drunk ‘n’ Disorderly, who were also allied with Lost Obsession.

The second half of Retribution saw a decline in activity as the big null sec powers began positioning themselves for war.  Well, at least TEST did.  The number of accounts logged in declined from an average of 35,752 two weeks after Asakai until Burn Jita 2, when the number logged in hit a Retribution-worst 30,604.  Immediately following Burn Jita 2 was Fanfest.  The excitement generated by the event, combined with the upcoming changes for Odyssey, spurred the ACU to 36,252 for Odyssey's launch week.

If Retribution was a success, then Odyssey was anything but.  The ACU fell by 7.4% in the first week and never recovered.  The numbers for the first week were probably inflated as the CFC immediately invaded TEST-owned Fountain for the newly rebalanced moons in the region.  Another factor that could have contributed to the decline was the introduction of dual character training.

For the first ten years of EVE's history, players could only train one character on an account.  Players who wanted to develop multiple characters needed to obtain multiple accounts.  With dual character training, a player could pay with PLEX (the equivalent of one month's subscription fee) to train two characters.  Of course, that meant that some pilots would consolidate accounts, thus reducing the number of subscriptions.  How many did that is only known to CCP, but the ACU numbers over a week have never come within 2,000 users of the level recorded in the first week of Odyssey's launch.

One known fact is that in the wake of the destruction of a big null sec war, the ACU goes down.1  That held true with the Fountain War as well.  Despite the ACU falling 12.7% from the first week of the war until the final major battle in 6-VDT-H, the ACU would continue to fall after TEST announced its intentions of deploying back to low sec.  From the first week of the war until TEST lost its last system on 19 September, the ACU dropped 24.2%, from 36,252 down to 27,463. 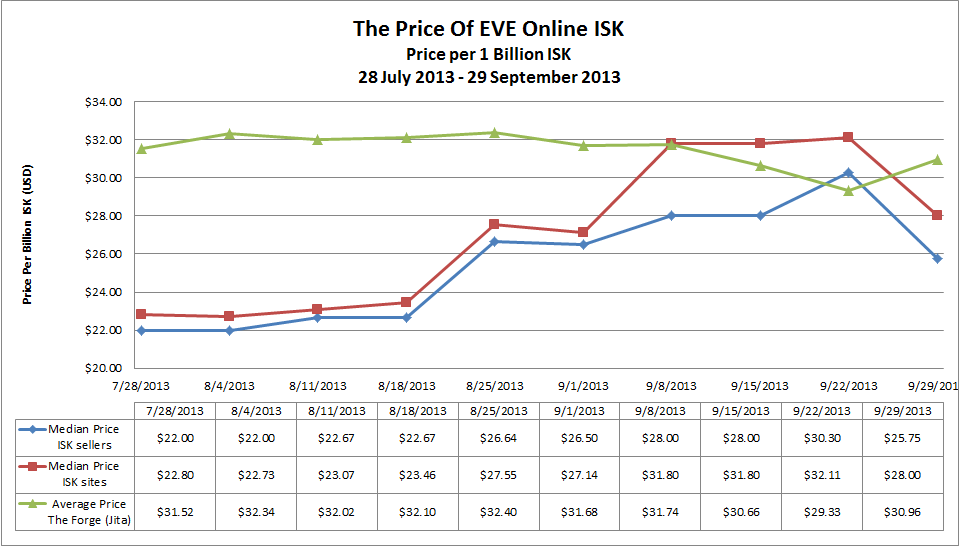 One interesting coincidence I was unaware of until doing the research for this post was that from the time TEST announced its pullout to Aridia until the CFC seized TEST's last system and the Goons made arrangements with Chribba to act as a trusted 3rd party in establishing rental agreements in their newly formed rental alliance, that the ISK sellers I monitor suffered from an ISK shortage that sent their prices sky high.  In the same week when TEST lost the last of its sovereignty, the median price charged by the ISK sellers was actually higher than if a player just purchased two PLEX from CCP and bought PLEX off the market in Jita.2

Late September was the low point for Odyssey, however.  Between increased Factional Warfare activity, the beginning of the Halloween War, and a live event that didn't go quite as planned, the ACU had again reached over 29,000.

Rubicon had a promising start, with the ACU increasing by 10.5% from the week before launch.  But like Odyssey, Rubicon was unable to hold onto its initial success.  Unlike Odyssey, though, Rubicon did not give back all of its gains in the initial month.  The participants of the Halloween War proved more resilient than TEST and the decisive fight of the war, the battle of B-R5RB, saw a weekly ACU of 33,400, or 1,000 more than recorded during Rubicon's launch week.

However, a loss as massive as the one suffered by N3/PL is impossible to just shrug off.  While fighting did continue, the battle effectively ended the war.  Although New Eden saw a surge of new players enter the game, the traditional falloff of players logging in began.  From the Rubicon peak weekly ACU of 34,201 the week after B-R, the ACU bottomed out at 25,669 the week the Goons held Burn Jita 3.

War weariness wasn't the only cause for the decline in ACU.  During this same time, the price of PLEX, at least in terms of in-game currency, went through the roof.  From a price of 619 million ISK on 31 January, the average price of a PLEX sold in Jita rose 19.5%, to 739.9 million ISK six weeks later.  One of the conditions that will draw CCP intervention into the PLEX market is if the rate of increase is so high that it affects the ability of players to pay for PLEX to keep playing EVE.  At Fanfest, CCP revealed that the EVE Central Bank stepped in, probably on 11-12 April, to stabilize prices.

Rubicon was the last of the old-style expansions that CCP plans to release.  Kronos was the first of the planned content patches that CCP revealed it plans on releasing every six weeks.  The results so far, if the ACU numbers are any judge, are mixed.  While the ACU did go up 3.7%, the number of accounts actually logged in did not reach the level achieved during Fanfest four weeks earlier.  Worse, the numbers keep declining each week, but as the World Cup is currently running, that is possibly a statistical outlier that happens every four years.

That is a brief history of EVE over the past 18 months or so, trying to match events to the number of users logged onto Tranquility.  I'm sure that others will look at the annotated graph and come to different conclusions.  But the graph is interesting all the same.

1.  Although the drop after the fall of the Band of Brothers was caused by the Unholy Rage anti-RMT operation.