I realize that Friday's traditionally are reserved for flaming other bloggers, not praising them.  But Gevlon did a nice piece of quantitative analysis today using data from the past 18 months from Dotlan and came up with some interesting conclusions.  I would say that even Goons wouldn't argue too much with the post.  Of course, Goons are Goons and the post was written by Gevlon, so insults would fly.  That's just the nature of EVE at this point.

That got me to thinking about how Gevlon came to write that post.  He credits my Wednesday post for giving him the idea, but I started gathering data in response to a post by Sven over at EVE Lost and Found, "The State of EVE – Some Player Activity Statistics".  I thought he may have uncovered some data (I didn't realize Dotlan stored data back to 2010) that would validate a theory I have.  Turns out he didn't, but I learned something.  And a hat tip to Sugar Kyle for pointing out his blog to me.  I've added it to my blogroll.

He, in turn, was inspired to write his post due to the reaction to my post using the average concurrent users mark to note historical events in New Eden from the launch of Retribution up to the launch of Kronos.  I think the doom and gloom was getting to him.  Interestingly enough, though, he credits my post explaining how to pull the average concurrent user information from EVE Offline as the true start.  What really makes things interesting is that I wrote that piece partly in response to another post of Gevlon's, although I had considered posting the instructions for some time.  Gevlon's post just spurred me to action.  Gevlon then took the instructions and updated his post with some more cool analytic work in a way I hadn't considered before.

Just to allay fears that Gevlon and I sit in a little echo chamber discussing the merits of quantitative vs qualitative analysis, I should bring Niden into this post.  Niden's post took ideas from Sven's post (i.e. the ships killed projection for low sec in 2014 is pretty obvious) and pruned them down to concentrating on PvP.  Niden tends to focus on PvP, while I try to look at all aspects of low sec.  Then again, I'm a carebear living in low sec, so that's where my biases lay.  But I think that both Niden and I agree that low sec is a more lively place than before.  I think we just analyze the data differently.  Also, I'm a bit leery of using projections as no one really knows when CCP will choose to shake up the ant farm.

I probably should conclude this post with a chart I came up with when Blog Banter 52 was still a thing back in January.  Just because the ACU is declining doesn't mean I think subscriptions are also. 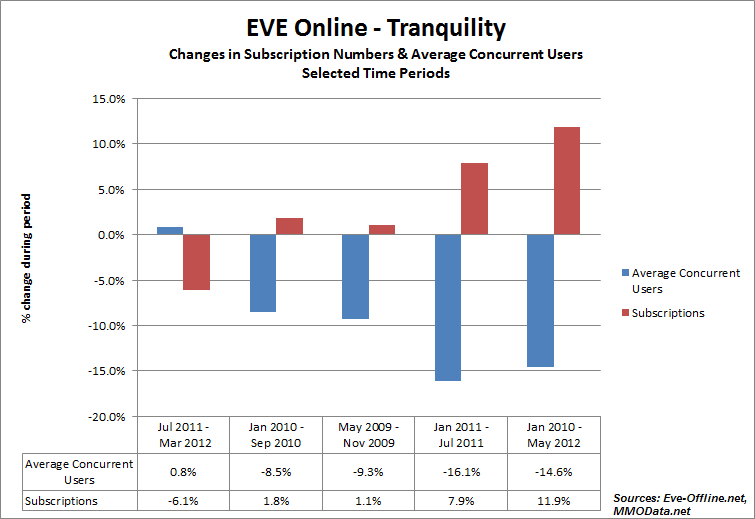 I have other reasons to believe that.  Just relying on the ACU?  Kind of weak.
Posted by NoizyGamer at 8:31 AM