The Game Of Graphs: What's Happening In Low Sec?

EVE players are known for their love of graphs and charts.  My post from last Monday that used a graph of the average concurrent users matched up with in-game events proved pretty popular and created some discussions.  But one of the talking points I've read in a couple of places leaves me a bit puzzled.
I'll use Niden's article, "EVE Is Dying",  on Crossing Zebras as the example, as that article is the most prominent I've read so far.  His argument is that whatever malaise has fallen upon EVE has missed low sec.  I won't argue against that premise as low sec certainly feels busier. A PvPer has chased me out of my normal ice mining system and my chosen backup system has too many Procurer and Skiff kills posted on the killboards for comfort.  But that is anecdotal evidence and I want hard numbers to back up my gut feeling.  But I don't think that Niden and others have provided those numbers.

The 2014 projected totals really bothered me and so I started running numbers on my own a few days before Niden's article was published on CZ.  But instead of using the yearly numbers, I used the monthly totals and created the below graph. 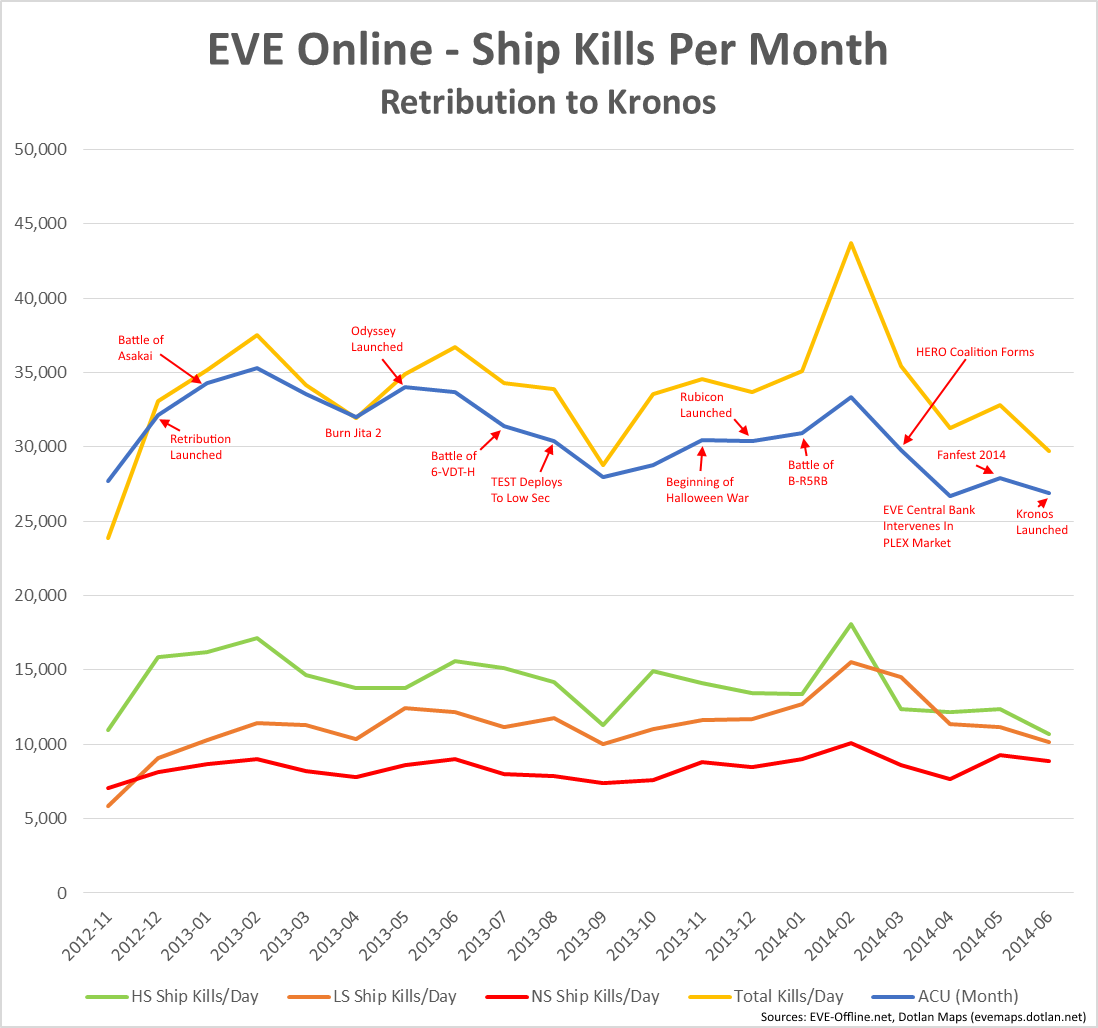 I combined the monthly ship kill data from Dotlan with the average concurrent user (ACU) data from Chribba's EVE-Offline.net.  I converted the monthly totals from Dotlan to daily totals in order to do a proper comparison between months with varying numbers of days.  I included four graph lines for ship kills: one each for high sec, low sec, null sec, and the total number of ships killed in known space.  Wormhole totals are not included due to the EVE Online API no longer giving that information starting in June 2014.  But as many of the comparisons I read were between low sec and null sec, I don't see the omission causing an issue.

I need to point out two items that could cause discrepancies in the results. First, I had to massage the data from EVE Offline to make the weekly data fit into calendar months in order to match up with the monthly data from Dotlan.  The second is that the numbers from Dotlan are not 100% accurate due to unexpected downtimes of CCP's API service and maintenance down times of Dotlan.  But after examining the data, I believe any discrepancy is minor and will not affect the overall analysis.  With those caveats stated, let's begin.

Second, PvP activity, as measured by ship kills, is declining in low sec.  Looking just at 2014, the number of ship kills declined from 12,701 per day in January down to 10,131 in June, the month that Kronos launched.  But making such a comparison is possibly unfair due to seasonal factors1, so I then compared June 2013 and June 2014.  In June 2013, low sec saw an average of 12,151 ships killed every day.  That indicates a year-to-year drop of 8.4% in the number of ships killed every day.

I should note that June's average of 10,131 ships killed per day is the second lowest total since December 2012, the month that Retribution launched.  The only month with a lower average was September 2013, when only 10,046 ships were killed on the average day.

So if PvP activity, at least as measured by kill mails, is not responsible for the increased activity in low sec, what is?  Surprisingly enough, the answer is low sec's PvE content.2 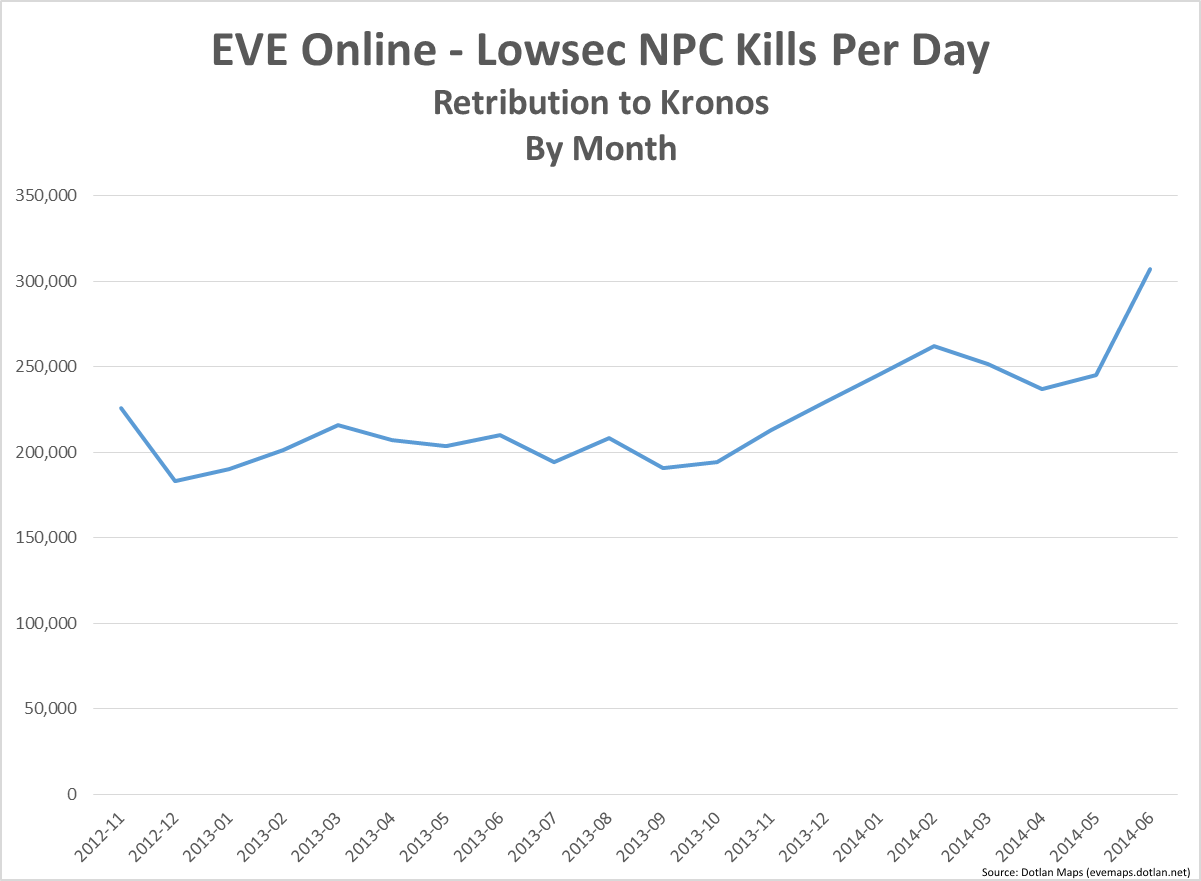 The increase in NPCs dying in low sec began with the arrival of TEST after they had lost their sovereignty to the CFC in September 2013.  From September 2013 to February 2014, the average number of NPCs dying each day in low sec to capsuleers rose 37.4%, from 190,652 to 261,889.  The drop in the number of NPCs dying in March and April corresponds with TEST joining the H.E.R.O. Coalition at the beginning of March and H.E.R.O.'s subsequent deployment to null sec.

In fairness to TEST, they did not just carebear during their stay in low.  The average amount of ships killed each day from September 2013 to February 2014 also jumped from 10,046 to 15,497, an increase of 54.3%.  In the four months since the formation of H.E.R.O. and the beginning of its null sec adventure, the number of ships killed each day in low sec has fallen back down to 10,131.

PvE activity increased slightly again in May, but the Kronos release tore down the floodgates.  With the exception of one station in Pure Blind, the new Mordu's Legion ships are only available as drops in low sec belts.  The rush to find BPCs for the ships led to an increase of 25.4% in the number of NPCs killed between the months of May and June.  That activity, in my opinion, is the leading cause of low sec feeling a lot livelier than the other parts of New Eden.

Undoubtedly, the number of ships killed per day falling by 9.1% between May and June is directly related to pilots spending more time ratting and less time fighting each other.  But that is another reason why I believe any API server failures or Dotlan maintenance sessions would not affect the analysis.  Those types of interruptions in data collection would affect both sets of data equally.  Or the proportions of the data discrepancies would not vary widely enough to make a practical difference in a judgement that the new low sec PvE content, and not PvP activity, is responsible for making low sec feel as vibrant as it does today.

2.  For this post, I am not including other PvE activity like exploration or mining.  I only have statistics for the number of NPCs killed.
Posted by NoizyGamer at 6:00 AM