In The Midst Of Deadspace

Sometimes logistics get a little confused. After using some sub-optimal ammunition over the previous few days, Wandering Rose watched as the hanger crew unloaded some sorely needed Scourge and Mjolnir missles for her Claymore and crates of large EMP rounds for the 1400mm howitzers on Rosewalker's Maelstrom. Finally, she could relax until the next scheduled shipment arrived two days hence.


Thoughts of a quiet drink evaporated as a message arrived from Kiljavas Yaskasen, the Sisters of EVE security agent on the station circling Lanngisi III's second moon:


"It has come to my attention that another agent within Sisters of EVE revealed a sizable deadspace area inside Lanngisi that has apparently been claimed by the Amarr - Caldari alliance. Apparently what he found in there was more than he could handle, so it has fallen to us to resolve this critical matter of national security.

"Your first task is to infiltrate the Amarr slave compound and destroy the fleet guarding it. The previous agent with this assignment had discovered a secret entrance into the complex. However due to his bungling the Amarr forces now know about this 'hidden' route and therefore it's pointless to use it. Instead I want you to fly in there through the main gate and attack them head-on. You should be experienced enough to handle 'em, although I do of course recommend bringing some backup with you."

A frontal assault. Death doesn't phase capsuleers, but the nearly 10,000 crew on the two ships under her command weren't so resilient. Still, the offered 3.5 million ISK and 9,467 loyalty points was too much to pass up. Besides, the crews would relish the chance to smash another slave operation almost as much as she would.

With ships from two navies to deal with, Wandering Rose loaded her newly delivered Scourge heavy missiles to sweep the light Caldari units away while Rosewalker loaded EMP and sniped at long distance at the Amarr battleships. That left two Navy Ravens untouched for the first part of the fight, but they were unable to seriously threaten the shields of the Claymore.

Jumping through a second pocket, the capsuleers brushed aside a small Amarr force before warping outside a large Amarr fleet guarding the slave compound. The eight 1400mm howitzers outranged the fleet of 9 battleships, 3 cruisers and 18 frigates. And when the frigates closed in, a cloud of Hobgoblins backed by a rain of heavy missiles tore the Amarrian tackle ships to shreds. Salvage crews after the battle retrieved 50 Amarrian marines, who were delivered to Yaskasen's custody.

Soon, Yaskasen had another job for Wandering Rose:


"The Amarr troops you captured in your previous mission are unwilling to reveal any information. In fact we've nearly lost a few to suicide. So as a last ditch effort I want them brain scanned, we can 'fetch' images from their brain which may reveal something to us. It's a difficult and risky process, but then again these are the enemy and in war one must make decisions which would otherwise be deemed unethical.

"The equipment which is needed to do the brain scan is located at Hagilur V - Moon 7 - Freedom Extension Warehouse. Drop off the marines there and my associates will take care of the rest. Dismissed."

At least the Sisters operational security was improving. Keeping such equipment in low security space in a station operated by the Minmatar Republic's biggest shipping company at least gave some plausible deniability. On my way back to Lanngisi, Wandering Rose made a detour to pick up and consume her final Silver Ouroboros. By the time she arrived back in the station, Yaskasen had received the results of their enhanced interrogation:

"A brain scan of the marines you captured revealed images of a third entrance into the Amarr slave compound deadspace area. However getting through the first acceleration gate requires a key. Fortunately one of the marines knew its location.

"You must once again venture to the slave compound. There you will find an armory which was hidden by a cloaking field emitter. Since we know of its exact location now, we will modify your ship's computer to ignore the cloaking field. This should make the task of retrieving the key quite easy.

"Once you have the key report back to me, and I will give you the coordinates to the third entrance."

"Not giving me the coordinates?" Wandering Rose thought to herself. "And I thought she trusted me." Fortunately for Yaskasen's health, the facility was in the same system so Wandering Rose didn't mind that much. The biggest obstacle to getting the gate permit wasn't the small Amar fleet of 2 battleships, 6 cruisers and 5 frigates encountered upon landing in the deadspace pocket. The most irritating part was the 90 kilometer flight to the armory to pick up the gate pass. 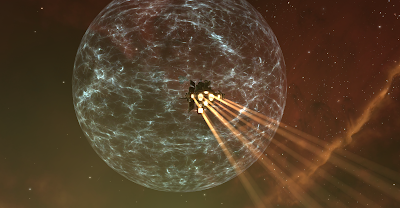 Upon returning to the station, I reported in to the Sisters agent:

"Now that we have the keycard it's time to send you to the third gate. Make sure you're well equipped and ready for anything the Amarr or Caldari might pit you against, because I have absolutely no idea what lies beyond the acceleration gate.

"I will fit your ship with some high tech sensors of my own, just in case I'm able to spot something that you miss. Don't worry, it won't fill a module slot. Now get going!"

"Seriously," the capsuleer grumbled, "if she was in such a hurry, Yaskasen should have given me the coordinates to the third gate before sending me to the armory." These agents are so flaky sometimes.

By this time, Wandering Rose and Rosewalker had analyzed the local Amarr Navy's tactics so well that they easily picked apart the fleet of 9 battleships, 3 cruisers and 10 frigates the pair found in the first deadspace pocket.

Jumping through the next gate, Yaskasen contacted Wandering Rose, informing her she had to destroy the stargate in the second deadspace pocket before reinforcements could stream into the system. The capsuleer force quickly overpowered the small force guarding the stargate and one wave of reinforcements before destroying the gate.

Upon returning to the station, Yaskasen summoned Wandering Rose for one final effort against the Amarr:

"Great work in your last mission. But now it is time for the final attack, to completely eliminate the Amarr presence within the troublesome deadspace area in Lanngisi. The sensors I had implanted onto your ship detected a gate leading towards their headquarters, within the room where you destroyed the stargate. It is time for you to access this gate and confront the remainder of their forces. I will again implant the sensors onto your ship, so expect me to contact you once you warp through the acceleration gate leading to their headquarters."

What could go wrong? Wandering Rose ordered the crews to replenish their stocks of Mjolnir heavy missiles and large EMP rounds and then the capsuleers headed for the final battle. The pair slipped through the first deadspace pocket unopposed and managed to surprise a Khanid battleship in the second. But as they jumped into the third pocket, they faced a big surprise. And a message from Yaskasen.

"This is your agent again.  So this is what they were up to!  No wonder they needed all those slaves.  A joint venture between the Caldari and Imperial Navies to construct a massive manufacturing plant right in our backyard.  This explains everything, the increased activity of their forces inside our sovereign space, the enslavement of some of our civilians ... this must be put to an end immediately. If they launch a full scale assault at us now, they'll have reinforcements coming from both sides of the border!  This would most certainly spell disaster for our campaign.  It's all up to you now, my friend.  Destroy the manufacturing plant, and any hostile forces that stand in your way.  For the glory of our nation!"

Wandering Rose couldn't help but admire the last touch from the Sisters agent, added in case their communications were compromised by the opposition. Keeping the Sisters involvement secret was even more important than defeating this final Caldari fleet, at least at the strategic level.

On a more personal level, the crews of the capsuleer ships, surprised by the presence of the Caldari, frantically scrambled to reload their weapons with Scourge heavy missiles and Phased Plasma Large rounds. But the delay cost the capsuleers as the Caldari ships managed to jam Wandering Rose's Claymore. In an effort to shake the jamming, Wandering Rose ordered her ships to align to a stargate and attacked the group of 3 battlecruisers and 3 cruisers and the end of the Caldari line.

Rosewalker began to engage the Caldari battlecruisers, but with Wandering Rose's command ship permajammed, the six battleships and four cruise missile batteries could concentrate on silencing the capsuleer battleship. With Rosewalker's capacitor running out and the Caldari tackle frigates closing in, the capsuleers were forced to warp off the field.

With knowledge of the Caldari defenses, Wandering Rose decided to double down on her previous tactics. Upon landing on grid in the Caldari deadspace pocket the second time, the capsuleer ships made an immediate right turn and hit the afterburners. The Caldari commander, seeing his foe attempting to open the range, changed his own tactics and had his ECM cruisers target the Maelstrom.

Wandering Rose changed her tactics and this time immediately had both ships dump out Hobgoblin drones. Between the drones and the Claymore's heavy missiles, the smaller ships, including the two cruisers jamming the Maelstrom, were soon destroyed. And without the protection of the jamming, the battleships fell victim to Rosewalker's 1400s.

Afterwards, Wandering Rose visited Yaskasen to collect the last of the 11.8 million ISK and 32,000 loyalty points for performing this unplanned contract. Then she wandered off to get a nice quiet drink.
Posted by NoizyGamer at 6:00 AM