In yesterday's post I mentioned making 64 million ISK looting the field on the last part of the Pot and Kettle series of missions. One element of running missions I'm trying to figure out is how much, or even if, I should loot the field. Back when I used to run security missions, I would just pull out a Noctis after every mission and salvage everything. Mobile Tractor Units? They didn't exist back then. To give an idea how long since the last time I seriously ran security missions, CCP introduced MTUs back in the Rubicon expansion in November 2013.

My ultimate goal is obtaining a Nestor, so stopping to salvage after every mission would really slow me down. With an MTU, however, I can loot the field while I am running the mission. The EVE University Wiki gives a short description:


A Mobile Tractor Unit (or MTU) is essentially a massive cargo container with a tractor beam bolted on. Once deployed, it uses a single tractor beam to pull in any wrecks and cargo containers. It has a range of 125 km, with a 1,000 m/sec tractor velocity, and a 27,000 m3 cargohold. Deployment time is only 10 seconds, and the MTU will last 2 days in space before despawning. The MTU is only accessible by its owner. When destroyed it drops partial loot the same way a destroyed ship does.

The MTU may not be deployed within 5 km of another MTU, within 50 km of stargates or stations, or within 40 km of a player owned starbase. It has 50,000 hitpoints. However unlike the Mobile Depot it does not enter reinforced mode and can be immediately destroyed. Like the Mobile Depot, the only consequence for shooting another player's MTU is a Suspect flag; CONCORD will not intervene.

The MTU targets the closest item first, tractors it in, and loots it. Due to the "closest first" behaviour, you can't use more than one MTU per site, as they will interfere with each other and pull nothing in at all.

The MTU has become extremely popular despite its cost, particularly for looting mission rats. Though not as fast at tractoring and looting as a Noctis, the MTU continues to loot a field even when you're not there, and deposits wrecks in an easy-to-salvage group around itself. This can allow your mission ship to salvage while running the mission, using either a utility high slot, or salvage drones.

One of the first things I noticed is that the MTU will scoop up more loot than I have cargo space. So I have developed a plan which I hope is common. I deploy the MTU, create a bookmark, and then let the deployable gather up all the wrecks. If the mission has more than one dungeon, I scoop the MTU to my cargo hold, which deposits all of the loot into a jet can. I then proceed to each dungeon until I get to the last one, where I may or may not leave the MTU to finish the job. 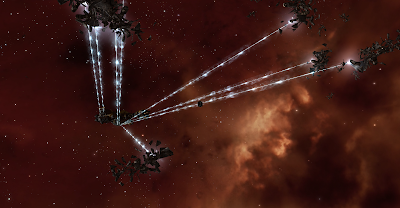 Lanngisi, the home of the Sisters of EVE level 4 agent Kiljavas Yaskasen, is no further than two jumps from any system in the Ani constellation. So flying back to base, turning in the mission, and then flying back in a Noctis does not take very much time. Turning in the mission first kills the mission site but not the wrecks. I then have the choice of flying out either a Prowler or a Noctis to gather up all the loot. I use the Prowler if I don't want to salvage the wrecks or the Noctis if I do. And if someone pops the MTU while I'm running around elsewhere? The thing has paid for itself eight times over, and that was after only a couple of days of seriously running missions.

I realize a lot of people will laugh and point out the flaws in my method. How could someone who's played for seven years not know the tricks to running high sec missions? Hey, EVE is hard and no one knows everything. Besides, figuring out the mechanics is part of the fun.
Posted by NoizyGamer at 6:00 AM