The south of New Eden is set to host EVE Online's next big war. TEST Alliance Please Ignore (TEST), Circle-of-Two (CO2), and DRONE WALKERS (DW) look to spearhead an effort against the Stainwagon coalition in Catch. CSM member Jin'taan created a very good primer on the political situation and anyone interested in the conflict should take 15 minutes and watch. 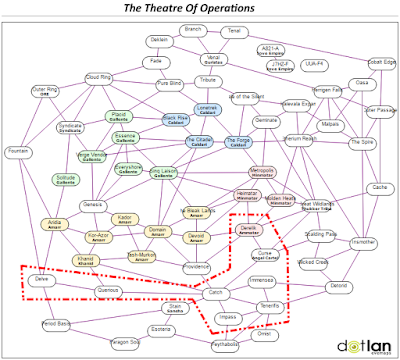 When discussing the war, one should probably have some sort of understanding the location of the conflict. The regions the news reports will probably concentrate on are located in the southern portion of the galactic map. I have outlined where I think the majority of the fighting will take place, although in the event of an extended conflict that occurs in excess of six months, regions outside the dotted line will also become war zones.


From everything I've heard, Catch will see the brunt of the initial fighting. 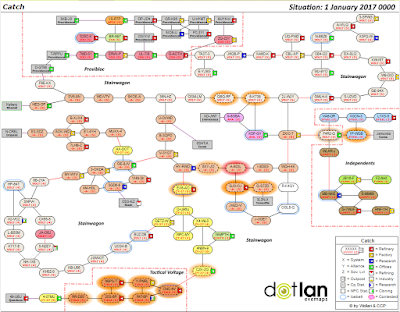 As of the beginning of the conflict, Catch was mainly owned by the Stainwagon coalition, with Volition Cult (VOLT) and Against ALL Authorities (-A-) the two largest sovereignty holders. The largest member of the coalition, Soviet Union (CY-27), also controls most of Impass and has major holdings in Esoteria and Feythabolis. Provibloc, the coalition that holds Providence, controls most of the systems in Catch that border Providence. Also holding sovereignty is the Tactical Voltage coalition (Dangerous Voltage and Tactical Supremacy) and independent alliances such as Cold Steel Alliance (STEEL), Just let it happen (FUM8), and League of Unaligned Master Pilots (LUMPY). 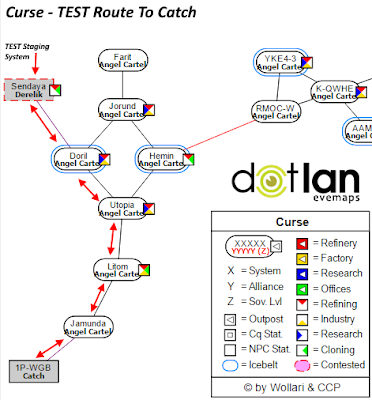 While I am not an expert on null sec warfare, I do have a little experience reading a map. According to information available on the EVE news sites, TEST is staging out of the low sec system of Sendaya in Derelik for their invasion of Catch. Running through the NPC-controlled region of Curse, TESTCO can hit the system of 1P-WGB. 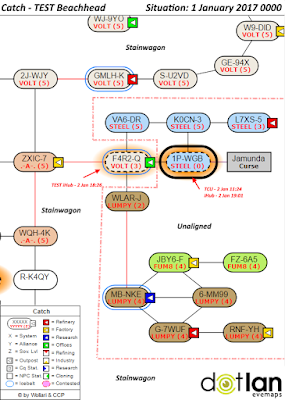 In a preliminary move on 21 December, TEST seized 1P-WGB from senseless intentions, a small German alliance who now only holds sov in a single system in Scalding Pass. But on Boxing Day (26 December), TEST lost control of the system to another small group of Germans, Cold Steel Alliance.

The system of F4R2-Q is a more interesting situation. The Volition Cult took control of the system from Triumvirate. on 26 November and still controls the Territorial Control Unit (TCU). But TEST managed to deploy an Infrastructure Hub (iHub) while Soviet-Union controls the outpost. The iHub was reinforced and is attackable on Monday.

With the coming of war, Stainwagon is cleaning up a potential threat their rear. Tactical Voltage holds systems that Stainwagon's allies, the RedSwarm Federation based in Delve, need to travel in order to fight TESTCO. Of Tactical Voltage's seven systems, Soviet-Union controls the iHubs in four:  RR-D05, 25S-6P, FAT-6P, and Y-PNRL. All other sovereignty structures, including the iHub in CZK-ZQ are reinforces and vulnerable to attack within the next 24-48 hours.

The RedSwarm Federation, led by Goonswarm Federation (CONDI), are looking to pay back old scores. Not only is former Imperium member CO2 one of the invading alliances, but another former coalition member, Fidelas Constans (FCON), is a member of a coalition currently engaged in fighting Stainwagon. That conflict leads to regions outside of Catch. 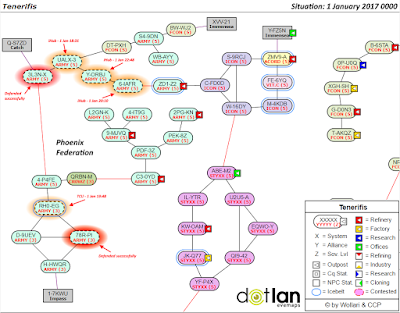 I'm not sure exactly how serious the conflict between the Phoenix Federation and Stainwagon was before the coming of TESTCO. Stainwagon appears to have reinforced sov structures in 6 systems controlled by Army of New Eden (ARMY), the Phoenix Federation's second largest alliance. But so far, ARMY has maintained control of two of the structures with the other four becoming vulnerable to attack within the next 12 hours. 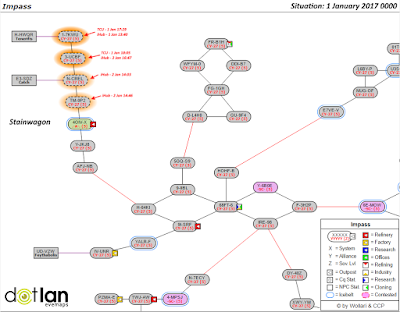 The final region is Impass, which is almost wholly owned by Soviet-Union. Four systems have a total of six sovereignty structures, including 4 iHubs, which will come out of reinforcement within 36 hours. 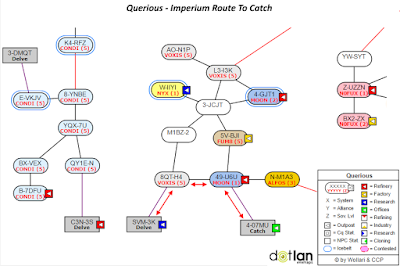 For completeness sake, the final map is the route between the Imperium's home in Delve and Catch. Looking at the galactic map would lead one to believe the Imperium would need to travel a very long way to help their Stainwagon allies in Catch. A quick look at the map in Querious shows how misleading the larger map is. The shortest route only involves jumping through three gates.

The map does show a couple of interesting things. The key system of 49-U6U is a bit of a jumble. The Eclipse. owns the TCU and thus shows up on the map. But Soviet-Union owns the iHub and Goonswarm Federation owns the station. I saw a similar situation in Cloud Ring during the Casino War, when GSF just wanted control of a station.

That's a brief look at the expected major war coming up in January in EVE Online. Many outlets have information, but usually the spatial factor is neglected. Hopefully some of the newer players as well as those who avoid null sec will find something useful to take away.