On Sunday, Stainwagon and Imperium forces prevented TESTCO from deploying two Fortizar-class citadels in the system of F4R2-Q. While I have not seen a battle report, the Imperium reportedly lost 4 supercarriers and 40 dreadnaughts in the system. 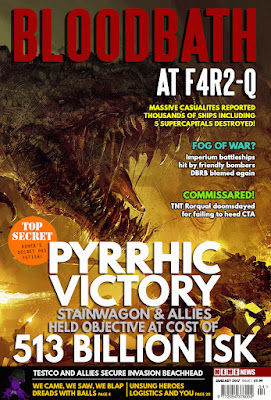 But was the reported loss of over 500 billion ISK in ships worth the effort? Rumor on r/eve is that TESTCO has already secured use of the League of Unaligned Master Pilots' Fortizar in MB-NKE. Still, clearing F4R2-Q for use is the optimum solution for TESTCO's power projection plans. 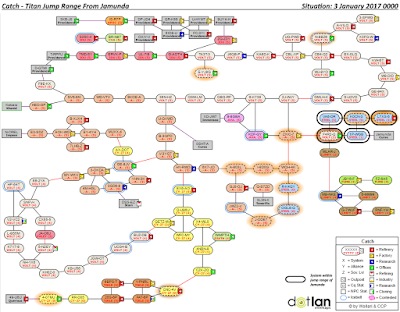 Basing in TESTCO's Fortizar in Jamunda cuts down tremendously on the range of the TESTCO supercap fleet. From Curse, the massive ships can only reach F4R2-Q and the Cold Steel Alliance systems in EM-L3K. The ships could not even reach MB-NKE without making two jumps. Still, not an impossible task, just riskier than a direct jump. 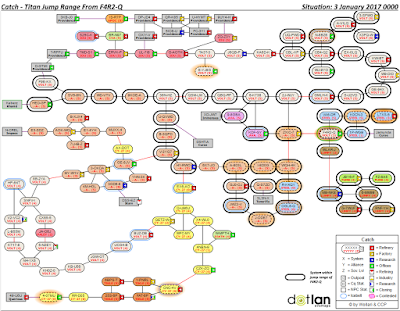 If TESTCO can establish a base in F4R2-Q, then their supercap fleet can support operations throughout northern Catch. Perhaps more importantly, if the situation turns bad, the fleet can retreat back to the Fortizar in Jamunda. Basing out of MB-NKE risks seeing trillions of ISK worth of ships becoming trapped. 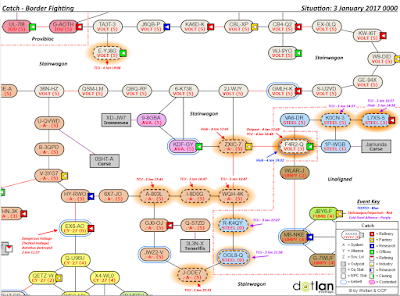 The Stainwagon assault on the Tactical Voltage pocket in southern Catch is on pause for a couple of days, as none of the remaining Tactical Supremacy sovereignty structures are currently reinforced. Russian forces are not totally inactive, however. Soviet-Union is expected to complete the conquest of CNC-4V by capturing the freeported station in the system sometime after downtime. Also, a Dangerous Voltage Astrahus was destroyed by Stainwagon and Imperium forces in EX6-AO. 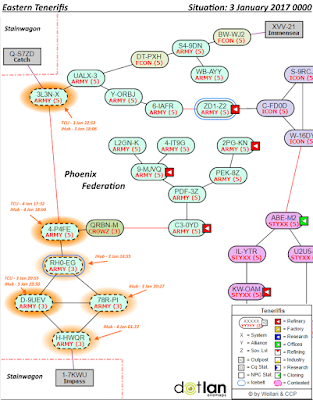 Finally, Phoenix Federation member Army of New Eden is experiencing a large amount of entosis spam. A total of 3 TCUs and 6 iHubs are due to come out of reinforcement within 30 hours of the publication of this post. The situation in Tenerifis so far has looked like a slapfight, but with an average Activity Defense Modifier of 1.85 in the targeted systems, someone may accidentally seize a structure.

For those wanting to know more about the situation, Jin'taan produced another video found at both Crossing Zebras and on his YouTube channel.
Posted by NoizyGamer at 6:00 AM