The Winter War: More Russians Are Coming And Freeports

I didn't expect to write much today on the war. The big battles usually occur on weekends. Then I opened up the map for Feythabolis on break yesterday ... and, oh my!

The big news, in my opinion, was SOLAR FLEET capturing the outpost in R97-CI. I am not sure of the relationship between the Stain Russians and the Drone Region Russians, but I hear it is not so good. So was the station a lucky target of opportunity or is the 27,000 character Drone Region Federation about to enter the war on the side of TESTCO?

Arguing against the idea of an invasion is the distance to the nearest allied system. But looking at the activity in southern Feythabolis, someone reinforced 1 territorial control unit (TCU) and 11 infrastructure hubs (iHub). The targeting of the iHubs indicates a plan to begin reducing activity defense modifiers in the systems, an indicator of a planned takeover. By Monday, SOLAR's intentions should become clearer. 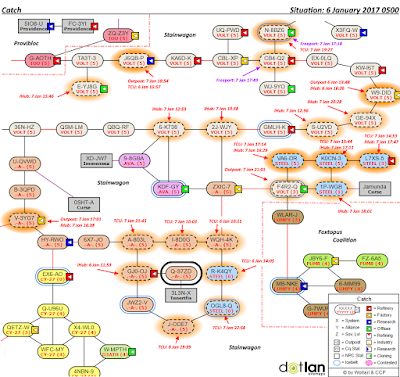 In eastern Catch, TESTCO has set up content for the weekend. Stainwagon will have to defend 1 outpost, 4 TCUs and 2 iHubs as they exit out of reinforced status today. Tomorrow is even busier, with 3 outposts (including in Stainwagon's staging system in V-3YG7), 7 TCUs, and 10 iHubs for destruction or freeporting. Speaking of freeporting, two outposts owned by The Volition Cult (in CB4-Q2 and N-8BZ6) were freeported and eligible for capture Saturday as well. Combine the situation in Catch with SOLAR FLEET's activity in Feythabolis and Stainwagon could suffer some serious damage this weekend.

Finally, Stainwagon will most likely finish the eviction of Tactical Voltage over the weekend. Yesterday, the final 4 stations owned by Tactical Supremacy were freeported and its final iHub destroyed. The remaining sovereignty structures along with the four stations should fall under Soviet-Union's control on Saturday.

I am not an expert on null sec warfare, having only covered last year's Casino War during the Aegis Sov era. The heavy concentration on attacking infrastructure hubs, however, leads me to believe a major push by TESTCO and its allies will occur over the weekend. The effect of Orthodox Christmas tomorrow on player availability is a factor in the fighting I am not sure of. Will participation increase or decrease? Either way, the results should prove interesting for those involved in the fighting.
Posted by NoizyGamer at 6:00 AM