The Winter War: Looking Beyond Catch

On Sunday, a post on r/eve reported that Stainwagon ordered a move from Catch to the LGK-VP system in Stain. Doubtless, western players will declare the war over and that the Stainfraggin coalition won. If the fighting only took place in Catch, one could say the claim is true. But the fighting is not just confined to Catch.

Here are some of the relevant points from the meeting notes:

I'm not sure saying that SOLAR just started attacking Stainwagon's (specifically Soviet-Union's) space is accurate. Here is the situation map from 6 January, when SOLAR WING had just captured its first station in Feythabolis.

And here is the situation as of midnight today.

SOLAR WING, contrary to the belief of some western players, captured the first outpost of the Winter War for the anti-Stainwagon forces, in R97-CI, on 5 January. 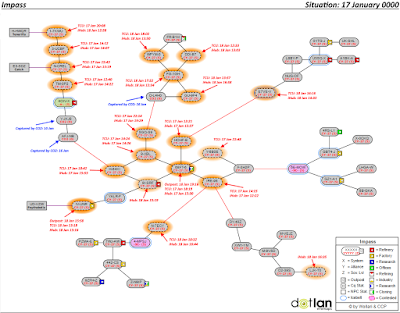 I should also add that Soviet-Union is facing pressure in Impass as well. Circle-of-Two managed to drop TCUs and iHubs in AFJ-NB and D-L4H0 yesterday.

One of the statistics that stuck me was the number of systems Soviet-Union owns that currently have at least one sovereignty timer to defend in Catch, Impass, and Feythabolis: 41. How can an alliance of 2142 members defend timers scattered across 41 systems in 3 regions? The obvious answer is they can't.

Another statistic is that Soviet-Union, as of midnight, owned 124 systems. In contrast, Goonswarm Federation, with 10 times the number of characters, only claims 90 systems. With a population density of 242 characters per system, GSF seems well adapted to take advantage of the Aegis sovereignty system. Soviet-Union and Stainwagon, on the other hand, look like they will need to fall back to defensible positions. Quite frankly, that's an awful lot of systems to lose.
Posted by NoizyGamer at 6:00 AM