The Winter War: Death To Supercarriers And Citadels

The fresh new war in the south of New Eden is generating a lot of attention from EVE's propaganda specialists. Of course, one of the biggest challenges is to name the war. A lot of the proposed names are linked to either the Imperium or to former Imperium members. I'm surprised no one's thought to call this conflict The Ice Floe War. After all, a massive amount of CO2 is threatening the home of the southern Russians. After a couple of days, I thought of photos like this:

Enough of the fun stuff. Serious internet spaceship stuff happened yesterday. Most of the action took place in Catch. Below is an updated map.

UPDATE: Since creating these maps, Rapid Firing informed me in the comments of yesterday's post that League of Unaligned Master Pilots (LUMPY) and Just let it happen (FUM8) are aligned with TESTCO and Triumvirate. (TRI). According to EVE Coalitions by Chuggi, that would place the two alliances with Vanguard Coalition. 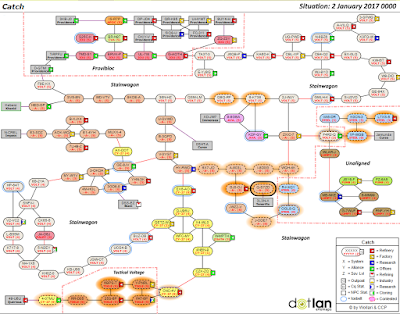 Three constellations in Catch saw significant activity. The first, EM-L3K, witnessed TESTCO's attempt to strengthen its beachhead in F4R2-Q. Both TEST Alliance Please Ignore and Circle-Of-Two attempted to drop a Fortizar each in the system. Stainwagon and Imperium forces moved to kill the massive structures before they could finish deploying and become fully operational. 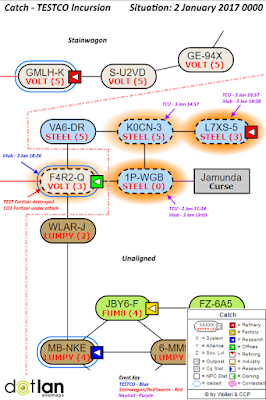 At the height of yesterday's fighting, Imperium News reported over 3700 ships in the system. The Imperium secured the objective by dropping supercarriers on the field at approximately 2315. At the end, both the TEST and CO2 fortizars were destroyed. The defending forces did not walk away unscathed as the Imperium supercap fleet lost three Aeons and a Nyx.

In other news in the constellation, Cold Steel Alliance is facing pressure as 3 territorial control units and 2 infrastructure hubs come out of reinforcement in the next 30 hours.

In the south of Catch, Stainwagon and Imperium forces continued to attack Tactical Supremacy's systems in BRP2-K. In CNC-4V, Stainwagon and Imperium forces captured both the iHub and TCU and freeported the outpost. Stainwagon can complete the conquest of the system on Tuesday. The system's defenders did manage to inflict significant damage as a Tactical Voltage fleet managed to catch a Goonswarm Federation Aeon on the FAT-6P gate and dispatch the ship, making a fifth supercarrier loss for the Imperium's supercap fleet in a matter of hours. 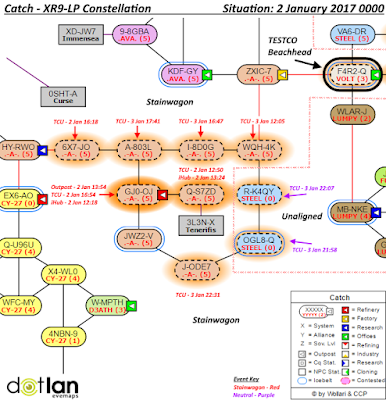 Perhaps the most significant long-term action occurred in the central constellation of XR9-LP. If Phoenix Federation plans to join the invasion of Catch, the shortest route is through Q-S7ZD with the probable goal of seizing GJ0-OJ. Both sides are entosising the other, but after harassing Army of New Eden yesterday, Against ALL Authorities saw most of their sovereignty structures reinforced over the past 24-36 hours. Cold Steel Alliance managed to drop TCUs in R-K4QY and OGL8-Q, although they were quickly reinforced.

The emergence of Phoenix Federation out of Tenerifis would threaten the transit of Imperium forces to the east and could hamper the defence of F4R2-Q.

More action is occurring in Tenerifis as Stainwagon continues to reinforce Army of New Eden systems in north-west portions of the region. But the largest fights continue to take place in Catch.
Posted by NoizyGamer at 6:00 AM