Yesterday I learned what the slashes meant in the challenge descriptions.

The Gala Gatecrashing challenge is composed of 3 parts. The first, worth 5 points, is just entering a site. The second, killing 10 NPCs within a site, was worth 10 points. The final part, also worth 10 points, is killing the final boss in the site. But I failed to do so. 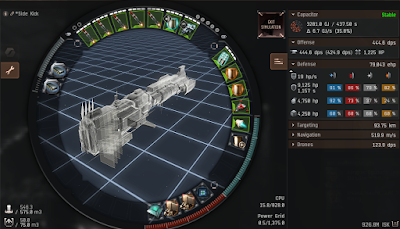 I decided to use my trusty XASB-fit Claymore. As I discovered, a wise choice. However, the ship just didn't have the staying power. I managed to get through the first two waves of NPCs. However, the second wave had two neuting Machariels which drained my capacitor to zero and turned off my hardeners. I went through a lot more cap boosters than I thought I would. Then, in the third wave, every NPC except the boss had scrams and/or points. It was kill all the tackle or lose a very expensive command ship. When I was left with just the boss to face, I was down to two charges in my ancillary shield booster. Since I didn't know what CCP had in store for me, I decided to warp off while I could.

The challenge is stuck on step 3/3 because I had to fly 6 jumps to my base in order to get more cap boosters. By the time I got back, someone else had completed the site. Stuff happens.

So, what went wrong. The first thing is I got greedy. I was carrying around a mobile tractor unit which takes up 100 m3. By cutting down the I really could have used the another set of cap boosters to load  into the XASB. 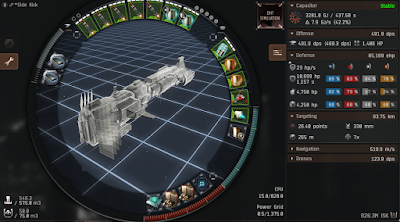 The second tank change is to swap out the Skirmish Command Burst II for a second Shield Command Burst II. While hurting my mobility, I would add another 8% to my raw shield hit points. Given the speed of the NPCs, I'm not outrunning anything anyway.

The final change is to break down and use faction missiles. I use faction ammo in abyssal sites and I need to treat the Guardian Gala sites the same way. Besides, I already have 130K Inferno Heavy Missiles. I just need to give some to an alt to upgrade to the faction version. 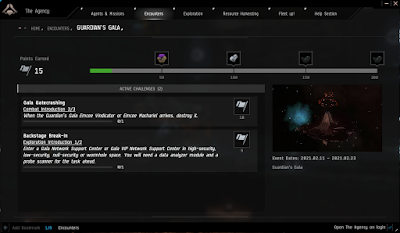 So after day 1 I am sitting at 15 points, 35 points away from getting a SKIN. I only attempted one site. I've also collected 350,000 ISK in dropped items. And yet, that was a couple of hours of time. At this point, I'm not feeling very satisfied.